British Prime Minister Theresa May wants reassurances that a section of the Brexit withdrawal agreement known as the Irish backstop is temporary. EU leaders say they will at least try to avoid triggering it. 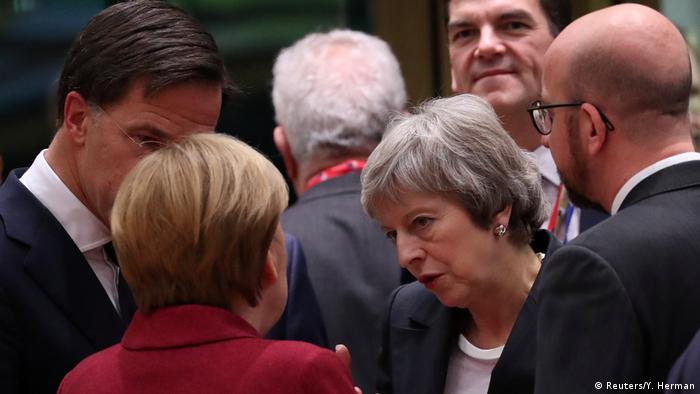 European Union leaders on Friday once again ruled out changes to the United Kingdom's withdrawal agreement. But they reassured British Prime Minister Theresa May that they would try to finalize a new UK-EU free trade deal before 2021.

In a joint statement, the leaders of 27 EU member states said it was their "firm determination" to finish the free trade deal as quickly as possible to avoid triggering a controversial "backstop" arrangement in the withdrawal agreement.

The backstop, which is legally binding, would maintain an open border between Northern Ireland, a British territory, and EU-member Ireland if London and Brussels fail to agree on a new free trade deal by December 2020.

May seeks EU assurances in bid to pass Brexit deal

The embattled prime minister is struggling to convince enough hard-line lawmakers in her Conservative Party to approve the withdrawal agreement over fears that the backstop could force the UK to accept EU rules indefinitely.

May had met earlier with EU leaders in Brussels to seek "legal and political assurances" from the EU that the backstop would be temporary. But during the meeting, EU leaders became frustrated by May's lack of clarity over the kind of assurances she wanted.

Can she do it?

The prime minister, who suspended a parliamentary vote on the deal on Monday to avoid a near certain defeat, faces a difficult task of saving the deal if her EU counterparts stand firm in refusing any legal changes to the backstop.

Many pro-Brexit lawmakers want the withdrawal agreement to give the UK the right to exit the backstop or for the arrangement to have a legally-binding expiry date.

But Irish Prime Minister Leo Varadkar dismissed those options ahead of the EU leaders' meeting. "If the backstop has an expiry date, if there is a unilateral exit clause, then it is not a backstop," he said.

The political fallout in the UK over the withdrawal agreement had raised doubts about May's future in office.

On Wednesday, she survived a vote of no confidence in her leadership of the Conservative Party.

But May, who has vowed to step down before the next election in 2022, could still face a parliamentary vote of no confidence if Labour, the biggest opposition party, heeds calls from other opposition parties to request the move.

If British lawmakers fail to approve the withdrawal agreement, the UK risks crashing out of the EU on March 29, 2019 without any deal in place. Many observers, including the UK government, predict severe economic and political turbulence after a "no-deal" Brexit.

Speaking after the meeting in Brussels, European Commission President Jean-Claude Juncker said the bloc was stepping up preparations for such an outcome.

"The Commission will publish on December 19 all the information that is generally useful for the preparation of no deal," he said.