A new framework to allow sanctions over chemical weapon use could see restrictions placed on Russia over the poisoning of former spy Sergei Skripal. Potential sanctions could involve travel bans and asset freezes. 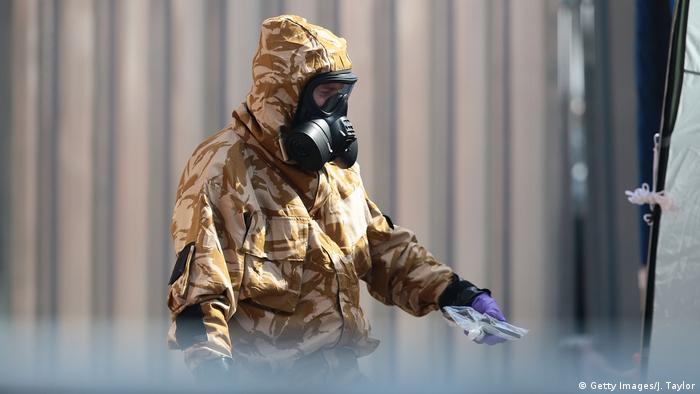 The European Union on Monday unveiled a legal framework to allow sanctions against the use of chemical weapons.

The framework gives the EU the power to place restrictive measures on people or entities identified as being involved in the development or deployment of chemical weapons, regardless of their location or nationality, EU foreign ministers said in a press release.

It is important "to make clear that something like this can't be left unpunished," said German Foreign Minister Heiko Maas.

The measure would also apply to anyone helping or encouraging chemical weapons attacks, and includes the ability to impose travel bans, freeze assets, and ban EU citizens or groups from making money available to anyone on the sanctions list.

"This decision contributes to the EU's efforts to counter the proliferation and use of chemical weapons which poses a serious threat to international security," the ministers' statement said.

The new legal framework would allow the EU to sanction Russia for its reported role in a near-fatal nerve agent attack on former Russian spy Sergei Skripal and his daughter Yulia in the British city of Salisbury in March.

Britain, along with countries such as Germany, France, Canada and the US, has blamed the attack on Russia, and in September, the UK accused two Russian intelligence officers of being responsible for the poisonings.

Russian officials have denied involvement in the poisoning and the spat saw the UK and supporting countries expel Russian diplomats, a move Russia quickly reciprocated.

British prosecutors charged the two suspects in absentia with conspiracy to murder and possession of a chemical weapon.

These restrictions could also be applied against Syria for its reported attack on the rebel-held city of Douma in April.

The death toll is expected to rise after a suspected chemical weapons attack in one of the last remaining rebel strongholds in Syria, eastern Ghouta. The government and its ally, Russia, have denied the reports. (08.04.2018)

After extensive research, the Bellingcat investigative network has revealed the reportedly true identity of the second suspect in the poisoning of a Russian double agent in the UK. DW spoke to its founder, Eliot Higgins. (09.10.2018)