Turkey's foreign minister has accused the EU of caring for people who want to bring down Erdogan's government. The EU's foreign affairs chief has said she hopes Turkey will rectify its state of emergency crackdown. 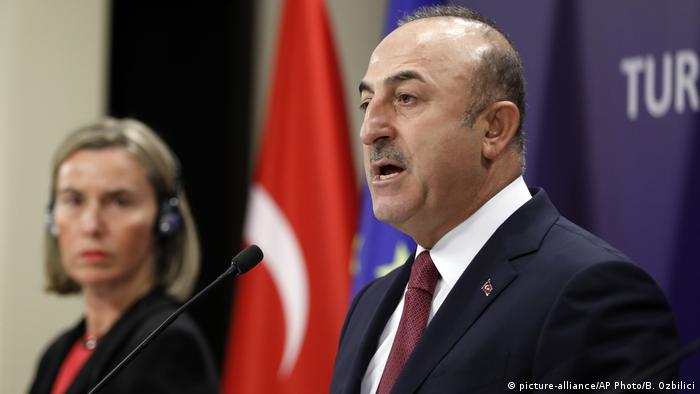 "Criminal and judicial proceedings must be based on the presumption of innocence," said Johannes Hahn, the EU's commissioner for European enlargement negotiations, on Thursday. "Journalists and civil society must be able to do their important work."
Since a failed coup in 2016, Turkey has extended a crackdown to include critical news outlets, jailing scores of journalists.

In his statement, Hahn referred to the case of Turkish rights activist Osman Kavala as well as 13 academics arrested last week. Turkish authorities have claimed they were involved in an attempt to unseat the government for allegedly supporting mass protests in 2013.

But Cavusoglu hit back at Hahn and EU foreign policy chief Federica Mogherini, saying the EU should stop defending people trying to bring down Turkish President Recep Tayyip Erdogan and his government.

"It is both meaningless and contradictory that the EU defends persons who said, 'I have done activities to overthrow the elected government in Turkey,' simply because they are [part of] civil society," said Cavusoglu.

of The 2016 coup attempt has strained relations between Ankara and Brussels, largely due to a wide-ranging crackdown by Turkish authorities that has seen politicians, academics and journalists jailed on terror-related charges.

"We are all very much aware of the marks left by the attempted coup in Turkey more than two years ago," Mogherini said. "The state of emergency is now behind us and I dare to hope that soon all related measures will be something of the past."

His family claimed Patrick K. was on a hiking holiday, but Turkey said he was fighting for the Kurdish YPG militia. Now a court in Sirnak has sentenced the German man to over six years in prison. (26.10.2018)

Ayla Albayrak:'I hope these dark and unpredictable times in Turkey will end'

#Article19forAll: Turkey imprisons more journalists than any other nation. Ayla Albayrak was sentenced there in absentia, 'an unprecedented verdict for a staff reporter of an accredited foreign media outlet in Turkey.' (20.11.2018)