EU leaders have failed to agree on key appointments to the bloc's most prestigious jobs, deferring their decision until the end of the month. Amid complex political horse trading, the task appears far from simple. 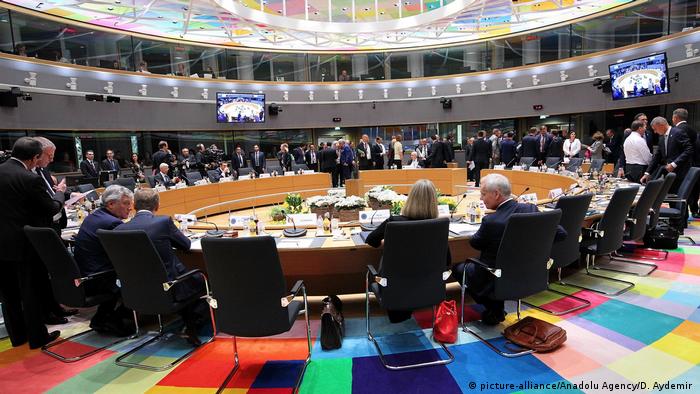 Leaders of the European Union's member states on Thursday struggled to break the deadlock over the bloc's key leadership positions.

Heads of government were gathered to decide on five top jobs — most notably who should succeed Jean-Claude Juncker as the next president of the European Commission, the EU's executive branch.

But despite talks extending into the early hours of Friday, the leaders deferred any decision on the posts until June 30.

"There was no majority on any candidate," said EU Council President Donald Tusk. "The European Council agreed that there has to be a package reflecting the diversity of the EU."

Juncker himself said he was confident that a solution would be found, although the task would not be easy. "I don't expect that. But it has to be done," said Juncker.

Favorite to replace Juncker is German EU lawmaker Manfred Weber, whose center-right European People's Party (EPP) is the largest grouping in the European Parliament. However, the EPP lost seats in last month's European elections, making it more difficult to form a majority in parliament that would be in favor of the Bavarian.

Ahead of the meeting, German Chancellor Angela Merkel and French President Emmanuel Macron said they were in favor of a delay to avoid any hasty decisions being made.

After the meeting, Merkel expressed concern that there appeared to be no clear majority in favor of Weber in the European Parliament, which must still ratify the appointments.

"It is a finding that presents us with challenges, of course, that is clear," Merkel said, stressing the importance of a "balanced" package of appointments that would find agreement. "Under no circumstances do we want a crisis with the parliament."

What other roles are up for grabs?

EU leaders must decide on successors to Tusk, and to Federica Mogherini, the bloc's foreign policy chief.

They'll also be choosing a new head of the European Central Bank (ECB) to replace current incumbent Mario Draghi, and the successor to Antonio Tajani, the president of the European Parliament.

Why is it proving so difficult?

The process of choosing people for the top jobs is far from straightforward.

According to Irish Prime Minister Leo Varadkar: "It's quicker to elect the pope, very often, than it is to fill these particular positions."

Because of the complexity, the process is often criticized for the horse-trading that takes place behind closed doors, and the length of time it takes. It involves both the European Parliament and member states:

Several elements need to be considered to find a solution that will satisfy everyone.

Party politics: There's keen competition between the conservative EPP, the Socialists, free-market liberals and even the Greens, to ensure their concerns are reflected by different EU institutions.

With the European parliament more divided than ever after mainstream parties lost ground at the European elections, smaller groupings can now exert more influence, making the process of negotiation more complex.

Nationality: While leaders of EU institutions are not supposed to show favor to their home countries, national pride still plays a role when the top appointments are made. Individual governments are keen to press for their own politicians — provided they are of a similar political hue — to be at the helm.

Gender: The leadership of the EU reflects the domestic politics of member states, with men taking most of the top roles. Macron and Tusk are among those demanding that at least two women be chosen for the most important jobs this time around.

Geography: Ideally, there should also be a mix of large member states – like Germany and France — and smaller ones such as Juncker's Luxembourg. The package should also reflect the diversity of the bloc. At present, it's a little lopsided with three out of the five roles filled by Italians.

Angela Merkel and Emmanuel Macron are at odds over the best candidate to lead the European Commission. The German chancellor backs center-right Manfred Weber, but the French president has other ideas. (28.05.2019)

Germany's major parties have slumped again in the elections for the European Parliament, with the Social Democrats particularly hard-hit. The result could potentially accelerate Chancellor Angela Merkel's departure. (26.05.2019)