No new dawn for far-right in European election | Europe | News and current affairs from around the continent | DW | 31.05.2019

No new dawn for far-right in European election 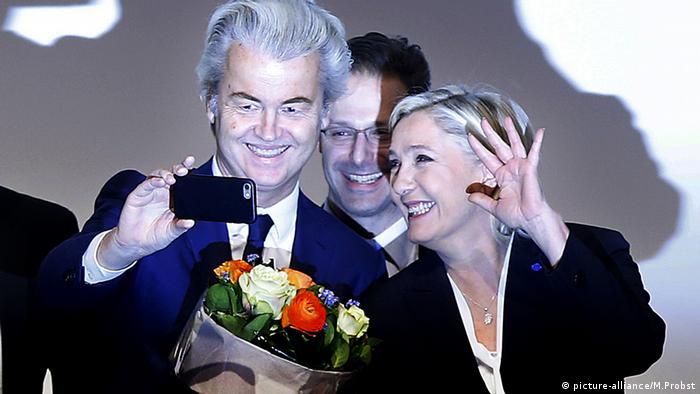 The party of Geert Wilders, the Islamophobic Dutch politician, lost all its seats in the European election

Italy's deputy prime minister, Matteo Salvini, said this week that Europe is changing. The leader of the far-right League party hailed the results of elections to the European Parliament, referring to the success of parties led by France's Marine Le Pen and Britain's Nigel Farage as well as to his own.

But a close look at the results for the far-right — parties characterized by extreme authoritarian, xenophobic and nationalist politics — suggests the shifts have been more subtle than populist rhetoric might suggest.

In countries that had a very small far-right vote in 2014, extremists have gained ground, in some places putting them on a par with mainstream opposition parties for the first time.

But where the far-right had already taken root, such as in France and Austria, there was little sign of a major surge beyond previous levels of support.

In France, Le Pen's National Rally (formerly known as the National Front) came up on top of the European poll, with just under 24% of the vote. But that was, in fact, a slight decrease in their 2014 result. And in elections to the country’s national parliament in 2017, the party received about half that — 13%, suggesting the far-right party may have some appeal as a protest vote, but not when it comes to choosing who runs the country.

Liz Fekete, director of the Institute for Race Relations, said Le Pen had benefited from the failure of French president Emmanuel Macron to deliver on his promise of an alternative to establishment politics. But she warned against reading too much into the National Rally's strong performance in elections to the Brussels parliament. "Their achievements can be over-estimated because European elections tend to throw up quite strange results," she told DW.

In Britain, Farage's newly formed Brexit Party also came first in the election to the European parliament. But with little in the way of policy other than opposition to EU membership, the single-issue party's success does not suggest widespread support for a wider far-right platform.

Salvini's own party surged from the 6% it received in the 2014 European election to almost 34%. However, in a national election just last year, it collected a much lower share of the vote, at 17%. That was enough the make it the second-largest party on the country's parliament, but also shows the limits of its support.

"Salvini is a powerful orator and manipulator of media and media images," said Liz Fekete. "He's managed to establish a hegemony for his ideas."

But she sounded a note of skepticism over further increases in his support, pointing to a growing resistance in response to the League's fervent anti-migrant stance and its moves to shut down dissent.

"Key figures are emerging as uncorrupt, decent people, prepared to take on the system, and others are rallying around them." Fekete cited the example of Domenico Lucano, the former mayor of Riace who attracted worldwide attention when he welcomed refugees to his village in 2011. Lucano is now facing criminal charges of aiding illegal immigration, and his case has become a cause célèbre for those opposed to Salvini's far-right politics.

The country with the biggest increase in support for a far-right party was Slovakia. There, almost 120,000 people (12%) voted for the neo-Nazi 'Our Slovakia' party, compared to 9,000 in the 2014 election. That put them in third place, not far behind Slovakia's social democrats, and gave them two seats in the European parliament.

Led by Marian Kotleba, its platform includes rhetoric against Slovakia's minority Roma community, while its leading members include people associated with anti-Semitism, Nazism and Holocaust denial.

A court in Slovakia declined to ban the party earlier in the month. Its breakthrough in the European election builds on the 8% vote share it received in the 2016 national election, raising the prospect that it could be on an upward trajectory.

In Belgium, the Vlaams Belang party made a breakthrough after marshaling opposition to the UN migration pact, which it claimed would increase immigration.

Germany, Sweden and Spain also saw increases in votes for the far-right. Fekete said in some countries they were boosted by the lower turnout in European elections than national elections. However, it is also worth noting the swell of support for anti-Brexit parties. In terms of the overall vote share, the vote for hard Brexit parties — the Brexit Party and UKIP — amounted to 35%, while the vote for pro-Remain parties totaled almost 42%.

In Hungary, the vote for the nationalist Jobbik dwindled but the governing Fidesz party, which has adopted a far-right stance under prime minister Viktor Orban, received 52% of the vote in a joint list with the country's Christian Democrats.

In Greece and Denmark, far-right parties lost support compared to 2014. In the Netherlands, the party of far-right politician Geert Wilders lost all four of its seats in the European parliament.

The vote share for Greece's 'Golden Dawn' was down from 9% to just under 5%.

Denmark's 'People’s Party,' which had received 27% of the votes in 2014, plummeted to 11%. That collapse in support may be confirmed in elections to the country’s national parliament next week, where the group could lose its position as the second-largest party.

Liz Fekete said the far-right had fragmented in Denmark and the Netherlands, casting doubt on Salvini's idea of a grand coalition of right-wing populist parties, which has attracted wide media coverage. She also noted that Farage's former party Ukip had been demolished by voters in Britain after taking a rightward turn.

DW analyzed the official results alongside data from ParlGov, compiled by researchers at the University of Bremen, to identify far-right parties that won seats in last week's elections to the European Parliament. The researchers classify parties into one of eight families according to their economic and social positions.