A German border town′s Left government and AfD voters | Germany | News and in-depth reporting from Berlin and beyond | DW | 30.05.2019

Frankurt (Oder) picked a Left mayor in 2018. In the EU elections, however, the voters went the opposite direction, opting for the far-right Alternative for Germany party. Why? DW's Marcel Fürstenau went to find out. 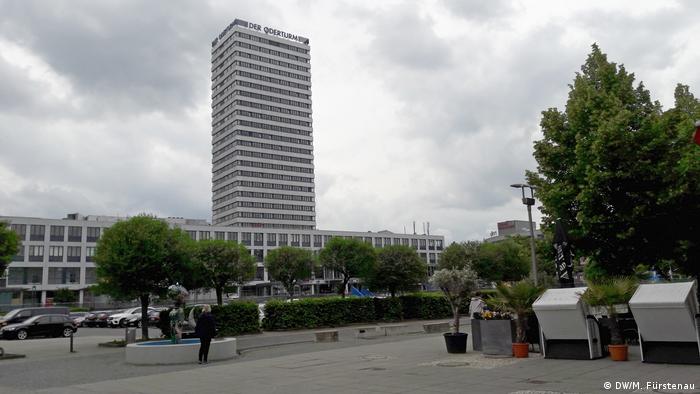 Brandenburg voted blue, the color of the Alternative for Germany (AfD) party. The nationalists moved into first place in the state's elections for the European Parliament, winning almost 21% of the vote, followed by the Left Party, at about 18%. This federal state, which has the German capital, Berlin, at its heart, is on the Polish border. So is the state of Saxony, to the south: Here, too, the AfD was the strongest party. The results should surprise no one; opinion polls had predicted this for a long time. And the AfD, which was founded in 2013, has always been particularly strong in the regions of the former East Germany.

Frankfurt (Oder) was the one city in Brandenburg where there was hope of bucking the trend. Just across the river lies the Polish city of Slubice, and there's a lively exchange between the towns. Frankfurt alone has seven German-Polish kindergartens and is home to people from more than 100 different countries. In March 2018, at the age of 33, René Wilke became mayor of Frankfurt. Almost two-thirds of the electorate cast their votes for the Left in the decisive second ballot. At his inauguration, Wilke gave a passionate speech in favor of greater national and international solidarity: "In a worrying time when perspective are darkening in Europe, in this time, we are a beacon of hope for the European Union," he said.

One year on, Wilke is disillusioned. The AfD triumphed in the elections for the European Parliament — even here, in the city of his birth. "That is not a good sign," he told DW. However, he said, the result must be seen in context. Though it is true that the AfD won slightly over 20%, almost 80% of voters had a "different view on the future of the European Union." 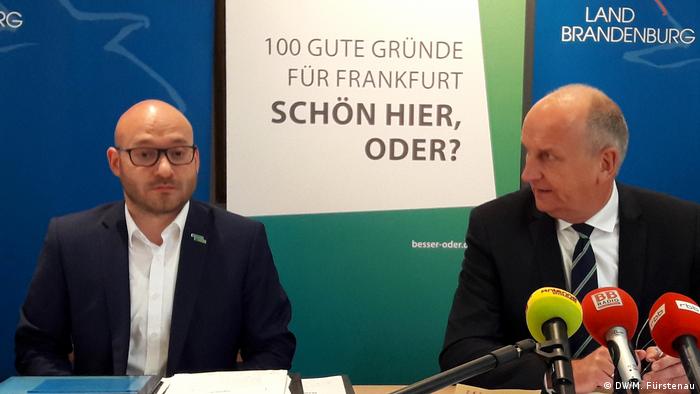 Wilke puzzles over why the AfD has been so successful. "Like many other people, I'm seeking an explanation," he said. The AfD seems to speak to a particular need in a way that other parties don't. "I'd like to find out more about that," Wilke said. He has the impression, though, that a lot of people keep their beliefs to themselves and stick "with those who think the same way." Nonetheless, Wilke remains confident: "We are an open-minded, international city, and that's how we live our lives.”

Walk through the city with your eyes and ears open, and you'll hear Polish, English spoken by students from the Viadrina European University, Arabic, Urdu and more. Ten percent of Frankfurt's 58,000 inhabitants don't have German passports — that's an unusually high number for the east. The AfD, however, has tried to play up its perceived downside — especially targeting the approximately 1,400 displaced people who live there. 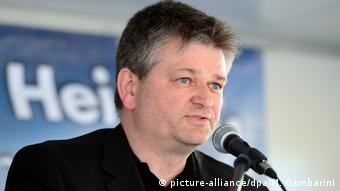 "If we'd taken in fewer refugees, we wouldn't have the problems," Wilko Möller, a 52-year-old policeman and the leader of the AfD in Frankfurt, told DW. "We spend a great deal of money on refugees," he said. "That's why we were able to achieve this election result," he added: People don't want "big cultural change."

The mayor takes a different view — though that doesn't mean that he has turned a blind eye to residents' grievances. In the summer of 2018, people were horrified by an attack on a party club that was perpetrated by a group of violent refugees. According to eyewitnesses, they attacked guests with knives and iron bars, shouting, "We are Arabs! We will slaughter you all!" For Mayor Wilke, that crossed a line. He is trying to get the perpetrators deported. In one instance he has already succeeded; the other cases are still ongoing.

AfD head in Frankfurt is from the west

Wilke has enraged many in his own party for his efforts to deport people. The Left party is fundamentally opposed to deportation. But the mayor stands by his policy, insisting that there comes a point when you have to say, "That's it — no more!" He says that a few people are jeopardizing the integration process for everyone, "because they give refugees get a bad name." That can't be allowed to happen.

You'd think that Frankfurt AfD leader Möller would approve of the deportations — but he doesn't. He said Wilke was simply trying to solve problems that he himself created. This is also how Möller explains the AfD's success in the European elections.

Möller is from the western German city of Hanover, while his partner is from eastern Germany. He points out that the majority of Frankfurt (Oder)'s residents have an East German background. Their concept of the West was, he says, very different to the reality. "This globalization, this endless internationalization without asking anyone's opinion." Back then, he says, people lived under a dictatorship — "without a doubt" — but later the euro was "imposed" on them, against their will. Billions were transferred abroad during the euro crisis — German taxpayers' money, that was, Möller said, obliterated. "People here are much more sensitive to state intervention than they are in the west," he said.

A few days after the AfD achieved its shocking result in the elections for the European Parliament, Möller had the opportunity to expound his views before an audience. The premier of the state of Brandenburg, Dietmar Woidke, came to visit, along with his governmental team. That evening they held a round-table discussion lasting several hours, under the title: "Let's get to the point, Brandenburg!" The people of Frankfurt were asked to speak their minds. Some of them did. They complained that there were too many wind turbines around the city, about poor train connections, and the lack of cultural institutions.

Möller was in the audience, along with some other members of his party. But they passed up the opportunity to participate in the open debate. The word "refugee" wasn't mentioned once. Shortly before the end of the event, an elderly man asked State Premier Woidke whether he thought he might be replaced by a member of the AfD after the elections for the Brandenburg parliament. Woidke acknowledged that he was "somewhat shocked" by the result of the weekend's elections. However, he said, he remained firmly convinced of one thing: The majority of people know "that our future lies in the spirit of community, cooperation and tolerance."

Angela Merkel's conservatives have suffered their worst postwar result. The center-left Social Democrats now lead, preliminary results show. Both parties say they are ready to form the next coalition.

What shifts led to the SPD win? Who turned up to vote where, and why? The demographic breakdown of the election in graphs.

German election: A guide to possible coalitions for the new government 17.05.2021