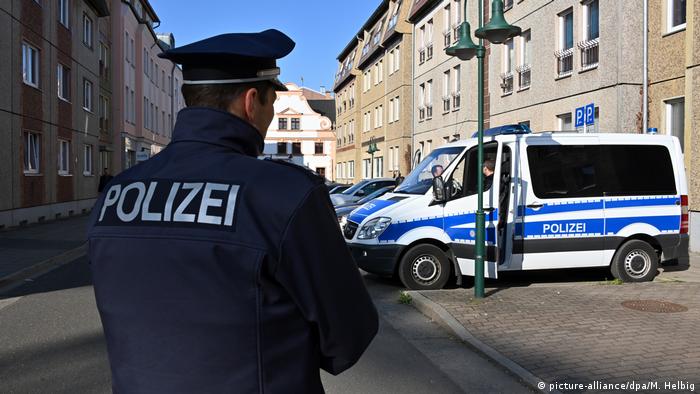 Police in Potsdam said on Wednesday that the raids started early in the morning and were continuing, centered on the area around Cottbus. The operation was expected to continue into the afternoon.

According to local media reports, 20 individuals suspected of being right-wing hooligans were being targeted. They are accused of forming a criminal union around Cottbus, Brandenburg's second-largest city. It is near the Polish border, 120 kilometers (75 miles) south of Berlin.

"We have problems with right-wing extremism and structures," Cottbus city spokesman Jan Glossman said on Wednesday morning. Earlier this year, Heiko Homburg, spokesman for Brandenburg's state office for the protection of the constitution — Germany's domestic intelligence agency — had described Cottbus as a "toxic entity," and the "hot spot of right-wing extremism in Brandenburg." 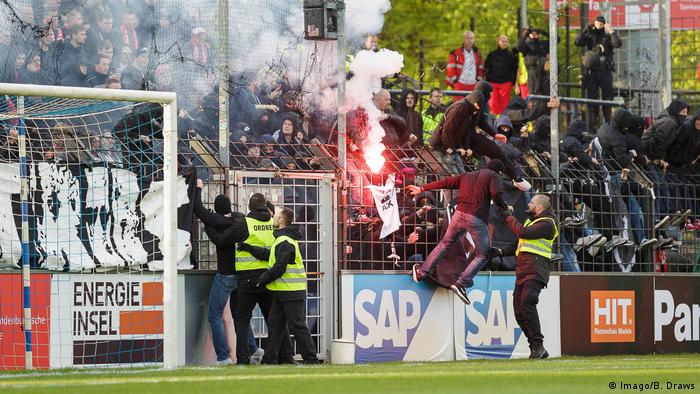 Fireworks set off in the crowd at a Cottbus soccer match

In February, Brandenburg's domestic intelligence chief, Frank Nürnberger, said about 400 individuals were believed to be involved in the network around Cottbus, with 170 of them in the city itself. He said the network was complicated and extended across a range of activities, from rockers to parts of the security industry, and tattoo studios to clothing and fitness-supplement shops.

The searches of warehouses and apartments were carried out in a total of four states: Brandenburg, Saxony, Mecklenburg-Western Pomerania and Berlin. Kolkwitz is just west of Cottbus; Frankfurt (Oder) and Görlitz are German towns on the Polish border; Kühlungsborn is a resort on the Baltic Sea coast and Henningsdorf is northwest of Berlin.

While no arrests were made, police are investigating a total of 50 criminal offenses including threatening behavior, assault, illegal possession of weapons and tax evasion.

Among the suspects are known neo-Nazis who have previously been involved in acts of violence.

Some of those involved are believed to have taken part in the far-right riots in Chemnitz last summer.

For months, German authorities have been investigating the source of more than 200 right-wing extremist emails that were sent to institutions across the country. Now police say they have a suspect. (05.04.2019)

About 450 firefighters are still battling the flames in eastern parts of Germany. Their efforts are made more difficult by harsh conditions and scarce access to the remote areas where the fires are raging.