Thuringia's state security agency wants to determine how much the AfD distances itself from right-wing extremism — if at all. The review will be used to later determine whether the party should be put under surveillance. 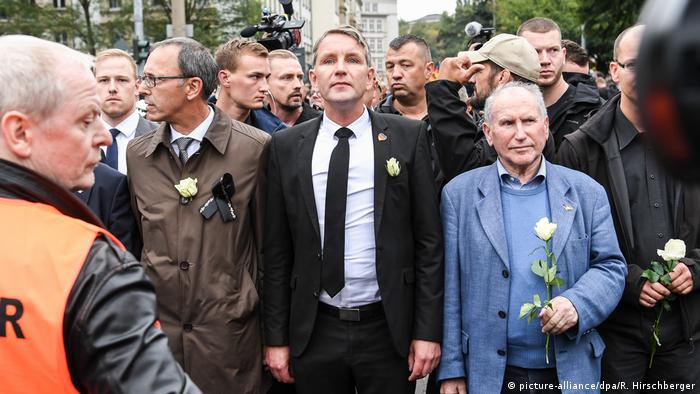 The Thuringia branch of the far-right Alternative for Germany (AfD) party is being officially reviewed by local security services, officials announced on Thursday.

Remarks from state party leader Björn Höcke (pictured above, center) particularly caught the attention of authorities, who has in the past described Berlin's Holocaust memorial as a "memorial of shame." He and other Thuringia AfD party officials also marched in protests organized by known-right-wing extremist groups in the eastern German city of Chemnitz.

The AfD's participation in the demonstrations in Chemnitz was one of the reasons authorities decided to review the right-wing populists, said Stephan Kramer, the head of Thuringia's BfV said on Thursday.

There is "an increasingly eroding demarcation" between the AfD and right-wing extremist groups, Kramer said.

Public comments by state party officials as well as AfD publications will be examined in the review, reported public broadcaster MDR. Authorities did not say when the review would start.

Officials at the security agency will try to determine whether or not Thuringia's AfD actually adheres to right-wing extremist beliefs, despite strategic efforts to differentiate themselves.

The review, however, does not mean that Thuringia's AfD is currently being put under surveillance by the domestic security agency.

It does, however, signal that authorities believe there's enough material to investigate the state party — and that surveillance could be close behind. Kramer confirmed that after the review, authorities would decide whether or not the AfD should be officially placed under surveillance.

Under Höcke's leadership, the Thuringia branch of the AfD is home to some of the more extreme members of a party already known for being markedly right-wing. The party holds eight of the 91 seats in the state parliament.

Calls for the AfD to be placed under surveillance by authorities rose again after Höcke and other AfD leaders marched alongside thousands of right-wing extremists and leaders of the anti-immigrant PEGIDA group in Chemnitz.

Other political parties in Germany have been placed under official surveillance, including the ultranationalist National Democratic Party of Germany (NPD) and individual members of the Left party.