The EU wants Turkey to respect international law and is ready to offer access to its customs union. The bloc wants to thrash out an agreement with Ankara on Cyprus, energy and refugees. 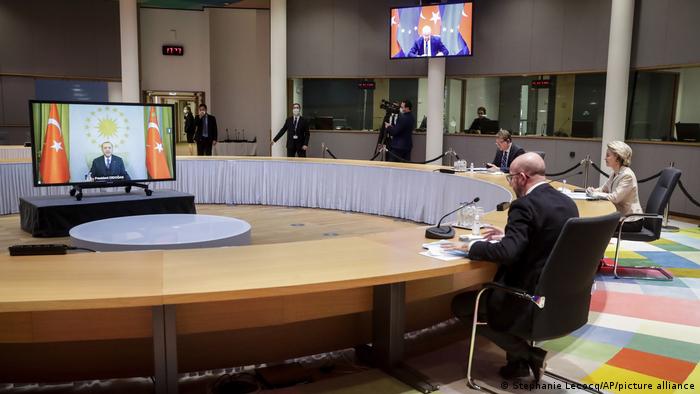 EU leaders on Thursday offered the possibility of deepening trade ties with Turkey, they told Ankara to stick to democratic norms and to avoid worsening a row over energy in the Mediterranean Sea.

"We call on Turkey to abstain from renewed provocations or unilateral actions in breach of international law," the EU leaders said in a leaked document obtained by DW.

Aiming to reward Turkish President Tayyip Erdogan for pulling back from a confrontation over gas exploration, the bloc will start preparations for a deeper customs union with Ankara, according to the draft communique. 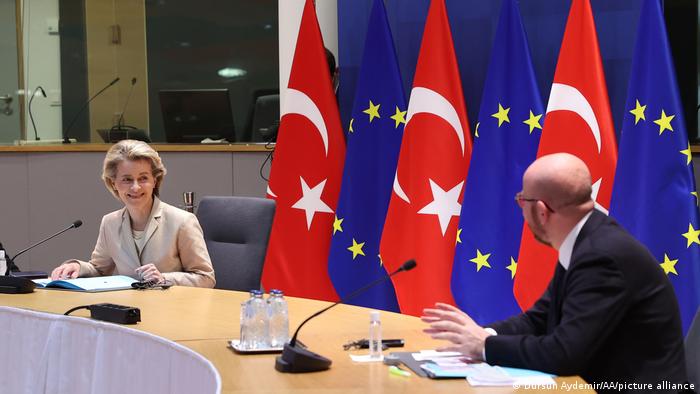 It would see the 1990’s-era trade agreement to be expanded to services, farm goods and public procurement.

The customs union expansion would bring Turkey, an EU candidate for membership, fully into the internal market of the world’s largest trading bloc.

It would allow for almost all goods and services to flow unhindered and swelling its size by 80 million Turkish consumers.

A solution to Turkey gas row?

The planned resolutions are intended to provide a strong incentive for Turkey to constructively seek a solution to a row over energy with Greece and Cyprus.

In the dispute, the EU threatened Turkey with severe sanctions last December. The country then put an end to the controversial gas exploration and indicated its willingness to talk.

Cyprus, backed by Greece and possibly France, has resisted any attempt to give too much away, given Turkey’s contested gas exploration work in waters off the island and Erdogan’s proposal for a two-state solution there.

Cyprus was split in 1974 when Turkey invaded in the wake of a coup aiming at uniting the island with Greece.

Turkish Cypriots declared independence in the northern third nearly a decade later, but only Turkey has recognized them. Cyprus joined the EU in 2004.

The UN is hosting informal talks April 27-29 in Geneva between the rival Greek and Turkish Cypriot sides as well as the island’s “guarantors” — Greece, Turkey and former colonial ruler Britain — to gauge chances of resuming peace talks.

EU diplomats also want the European Commission to explore ways to continue to help finance the estimated 4 million Syrian refugees in Turkey, as well as in Jordan and Lebanon.

It would build on a 2016 agreement that reduced migrant arrivals to the Greek islands, with the EU paying Turkey €6 billion to help refugees.