Turkey has irked the EU by prospecting for oil and gas in the region. The German chancellor says now is the time for dialog. 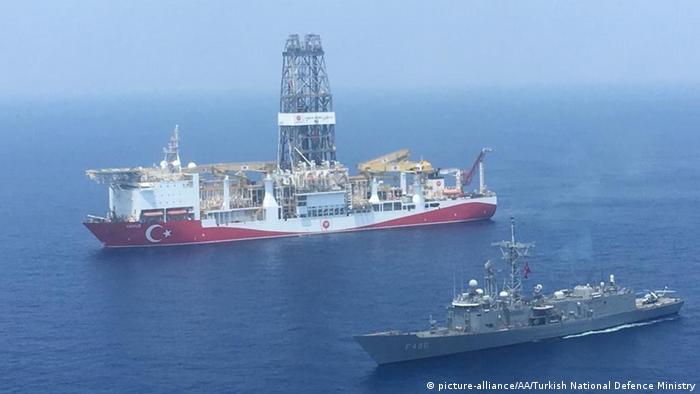 Though the EU, Cyprus and Greece have all protested vehemently to Turkey's actions, Ankara has remained truculent

German Chancellor Angela Merkel told Turkish President Recep Tayyip Erdogan that she "welcomed the most recent positive signals and developments in the eastern Mediterranean," according to a German government statement released Monday.

In a video conference between the two leaders, Merkel "stressed that it was now important to make progress in dialog."

Erdogan has caused much consternation in the EU by pursuing oil and gas exploration in waters off the coast of Cyprus and Greece, which maintain their sovereignty over the maritime territory.

Turkey initiated oil and gas exploration by sending drilling ships into waters off the island of Cyprus — itself a historical bone of contention between Turkey and Greece — in August 2020. Despite repeated warnings, Ankara has ignored EU calls for it to halt its activities.

In December, EU members voted to impose sanctions on Turkey over its intransigence in the matter. "Regrettably, Turkey has engaged in unilateral actions and provocations and escalated its rhetoric against the EU, EU member states and European leaders,'' read a statement from Brussels at the time.

During the December summit, EU leaders left open the possibility of expanding sanctions beyond individuals to affect much larger segments of the Turkish economy at their next EU leaders' summit, which will take place on March 25-26.

Erdogan brushed off the threat of further sanctions at the time, choosing to stick by his confrontational stance. Still, his words have become less aggressive of late and Merkel has reacted positively to his self-proclaimed desire to "turn the page."

Germany, home to Europe's largest Turkish diaspora, has consistently attempted to mediate between Turkey and the EU on a number of issues. Most notably in regard to keeping together the 2016 refugee deal that the bloc struck with Turkey in which Ankara prevents irregular immigration to Europe in exchange for cash.