The EU should deliver on visa liberalization and trade to keep the refugee deal in place, Turkish Foreign Minister Mevlut Cavusoglu has said. Ankara recently stated it would no longer stop refugees from going to Greece. 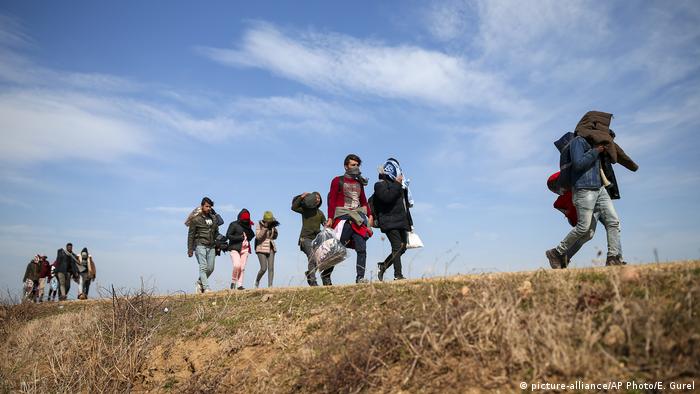 Turkey is ready for "constructive work" towards a new migrant deal with the European Union, Turkish Foreign Minister Mevlut Cavusoglu said in an interview published by the Anadolu news agency on Tuesday.

His remarks come after Turkish President Recep Tayyip Erdogan visited Brussels for a meeting with EU and NATO leaders. Following a meeting with Erdogan on Monday, EU Commission head Ursula von der Leyen said both sides were committed to preserving the 2016 migrant deal. However, Erdogan left Brussels on Monday evening without issuing a joint statement or appearing for the planned joint news conference.

Tensions are particularly high between Turkey and the EU member Greece due to Turkey's last month's announcement that it was "no longer able to hold refugees" heading across the EU border.

In the Tuesday interview, Cavusoglu said the EU would need to implement terms of the 2016 deal, including the promise of visa liberalization for Turkish nationals. Brussels should also upgrade its customs union with Turkey, the diplomat said.

Cavusoglu said Turkey "was not after money" but acting on principle, as the EU was lackluster in keeping it pledges.

Turkey has received some €6 billion ($6.8 billion) in financial assistance since the deal was signed less than four years ago. Some 3.6 million refugees, many of them from the neighboring  Syria, are now situated in Turkey.

Turkish President Erdogan has repeatedly tried to pressure the EU by threatening to "open the gates" and send the migrants towards Europe.

In his interview with the Anadolu agency, Cavusoglu said that he hoped for a new deal before the end of the month.

"If we reach an agreement by March 26 when there will be an EU leaders' summit, this issue will come on to the agenda of this meeting," said the minister.