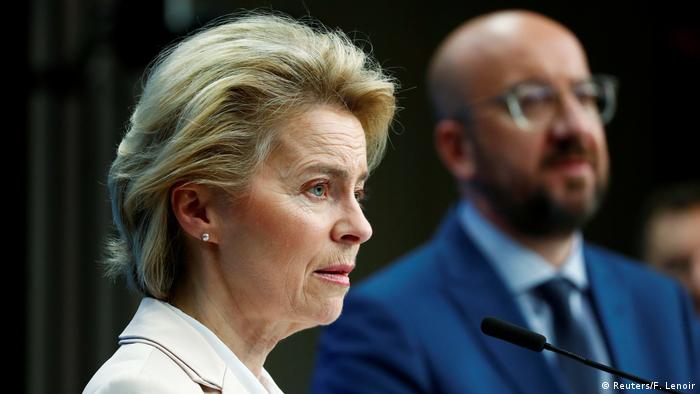 Erdogan's government announced at the end of February that Turkey would not stop refugees "who want to go to Europe," violating the terms of their 2016 pact with the EU aimed at preventing "irregular migration."

The announcement sparked a massive migration of refugees toward Turkey's border with Greece, leading to violent confrontations between migrants and Greek forces.

Von der Leyen, an ally of German Chancellor Angela Merkel, said both sides are committed to preserving the EU-Turkey agreement.

"Migrants need support, Greece needs support, but also Turkey needs support," the European Commission head told a press conference in Brussels. "This involves finding a path towards agreement."Von der Leyen said Monday's meeting was mainly about clarifying "how both sides see the past and how we evaluate the EU-Turkey statement ... to find common ground on where things are missing and where things are successful." 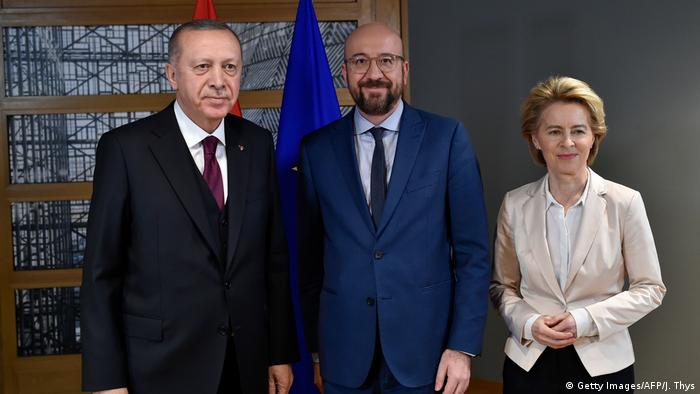 Regarding clashes between Greek forces and refugees at the Turkish-Greek border, she said, "Any use of excessive force is unacceptable and any action of the authorities has to be proportionate."

"It's important to implement this statement between the European Union and Turkey. That mean's everybody has to fulfill their own commitments," Michel told a press conference in Brussels.

"That's the case for the European Union, and we have explained how we plan to support the refugees," Michel added. "And it's also important that (Turkey's obligations have) to be fulfilled."

Michel said that EU Minister of Foreign Affairs Josep Borrell and his Turkish counterpart Melvut Cavusoglu will work with a team to evaluate how the 2016 pact is being implemented.

"And we will keep political dialog going with Erdogan," Michel added.

What is the 2016 EU-Turkey refugee deal?

In the wake of the European migrant crisis of 2015, the EU and Turkey reached an accord, dubbed the EU-Turkey Statement & Action Plan, to address "irregular migration" from Turkey into the European Union.

Under the agreement, Turkey would be obligated to take back migrants who pass through its territory to prevent them from crossing into Greece illegally. For every "irregular" migrant returned to Turkey, another migrant approved for asylum in the EU would be resettled in one of the bloc's 28 member states.

In addition, the EU gave Turkey €6 billion ($6.6 billion) in financial aid to assist with the country's large refugee population, which is currently above 3.5 million.

Since the accord came into effect, Erdogan had threatened repeatedly to "open the gates" during several disputes with the EU.

Greece has also seen a massive influx of migrants despite the agreement. Its islands in the Aegean Sea saw more than 60,000 land on its shores in 2019, and Greek authorities expected more than 100,000 in 2020. More than 42,000 migrants currently reside in Greek refugee camps, where there are shortages of food, clothing and medicine.

According to DW's Turkey correspondent Julia Hahn, Erdogan is seeking more support from the international community and from Europe, including more financial aid.

"Turkey hosts nearly 4 million refugees, mainly from Syria, and now Erdogan fears another large-scale refugee influx from Idlib, where hundreds of thousands of refugees have fled to near the Turkish border," Hahn said.

More and more migrants and refugees are gathering along the Turkish-Greek border. They are desperate — but Europe seems to have forgotten about its own core values, says DW's Jaafar Abdul Karim. (05.03.2020)