A storm may be brewing off the coast of Cyprus in the Mediterranean Sea: Turkey has sent two drilling ships to waters claimed by Cyprus and the EU has announced sanctions. DW takes a look at how the situation escalated. 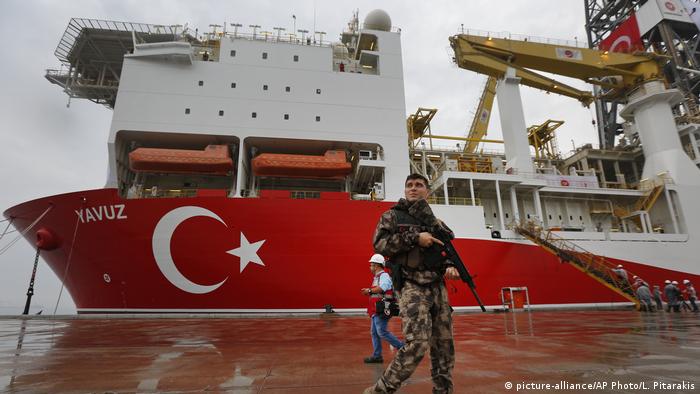 The EU has decided to impose economic sanctions on Turkey for its role in the Cyprus gas dispute. Even so, Ankara has announced it will continue its controversial drilling operation, and will send a fourth ship to the area for additional exploratory drilling. Greek and Turkish Cypriots are at a loggerheads over who is entitled to extract the lucrative natural resource.

How the the dispute originate?

In recent years, a US oil company discovered a gigantic gas field off the island's south coast. Experts assume that it may hold 227 billion cubic meters of gas — a find worth approximately €40 billion ($44.8 billion US dollar). In theory, good news — but bad news for an already volatile region. Cyprus, the third-largest island in the Mediterranean, has been split into a Turkish-administered north and Greek-controlled south since 1974. And both sides now lay claim to the gas, which has led to serious tensions.

When the Greek Cypriot side permitted international energy companies to extract the gas, they sent ships to explore the area. The Turkish side, meanwhile, felt betrayed by this move and dispatched navy ships. In February 2018, tensions escalated when a ship operated by Italian energy company ENI, exploring the gas field on behalf of the Greek Cypriot government, was prevented by Turkish warships from doing so. Tensions escalated even further this year when Turkey dispatched its drill ships "Fatih" and "Yavuz" to the gas-rich region. They have begun carrying out research efforts and exploration drills aided by a third vessel.

Why are the Greek and Turkish sides in disagreement?

The Greek Cypriot side deems Turkey's explorations off the island's coast a violation of Cypriot sovereignty and thus as "illegitimate." It argues that the law of the sea entitles it to an exclusive economic zone (EEZ) extending 200 miles into the sea, allowing it to exploit any natural resources within this area. But the complicated political situation in Cyprus means this law is not easy to apply.

When Greek Cypriot officers carried out a coup to take control over the island and unite it with Greece in 1974, Turkish forces occupied the island's north. It has kept this part of Cyprus, the self-designated Turkish Republic of Northern Cyprus (TRNC), under its control ever since. Only Turkey, however, recognizes the TRNC as an independent country with its own claim to an EEZ. Thus, Turkish Foreign Minister Mevlut Cavusoglu argues that the Turkish Cypriot side has the "sovereign right" to exploit gas in the region.

What is the EU's position?

Although Cyprus remains split into a Turkish and Greek part, the EU in 2004 opted to make the Republic of Cyprus — and thus the entire island — a member state. It does not recognize the Turkish-controlled TRNC, and regards the entire island as Greek-administered. Brussels therefore regards Turkish gas exploration off the Cypriot coast as a hostile act.

For months, high-ranking EU officials have demanded Turkey cease its gas explorations in the eastern Mediterranean. On Monday, they decided on punitive actions, opting to cut EU funds and suspend negotiations on the Comprehensive Air Transport Agreement. They also decided to cease top-level talks on business- and trade-related issues.

Demand for gas has been growing across the EU. Moreover, several member states are keen to reduce their dependence on Russia — currently Europe's biggest gas supplier — which is seen as an unreliable partner. So a vast gas field off the Cypriot coast would tick many boxes.

What are the odds of a solution?

As Turkey finds itself amid a severe economic crisis since last summer, the EU's economic sanctions come at a particularly inopportune moment. To make matters worse, Turkey might also face US sanctions for purchasing the Russian-made S-400 missile defense system. Turkey's rocky relationship with the EU and US is also scaring off investors, which is further exacerbating its economic crisis. One would therefore presume that Turkey has little interest in further escalating the Cypriot gas dispute.

But Turkish Foreign Minister Cavusoglu's response last week to planned EU measures did nothing to ease tensions; on the contrary. "It will have no effect on us when the EU takes steps against us. It will backfire." He went on to accuse Brussels of hypocrisy: "Because the EU only sides with the Greek Cypriots, we have to protect the rights of Turkish Cypriots."

While Ankara concedes that Greek Cypriots are "co-owners" of the gas field, it insists Turkish Cypriots must agree to them extracting the resource. The Turkish government, which describes itself as a guarantor power in Cyprus, has demanded that a "constructive approach" be found to equitably split access to the gas between Greek and Turkish Cypriots. But with tensions running this high, it appears unlikely such deal will be agreed upon anytime soon.

Brussels is to impose punitive measures on Ankara over its offshore gas drilling activities near Cyprus. "Targeted measures" on transport and bank lending are part of the EU package. (15.07.2019)

EastMed gas: Paving the way for a new geopolitical era?

The East Mediterranean gas project is often described as an explosive geopolitical initiative that's not without a number of hidden agendas. Sergio Matalucci looks at what's behind the current debates in the region. (24.06.2019)