Turkish President Recep Tayyip Erdogan says talks about the divided island of Cyprus should aim for a settlement between two separate states. Erdogan made his comments while attending a picnic in northern Cyprus. 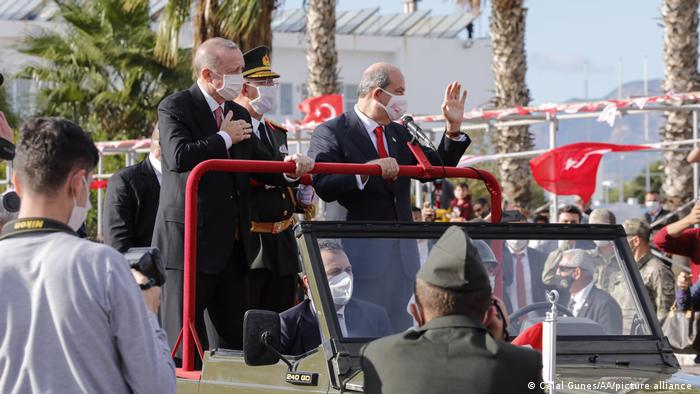 The Turkish president traveled to Cyprus on Sunday, using the controversial visit to call for a two-state solution that would separate the Greek-speaking and Turkish speaking parts of the island.

Erdogan was on the island to attend a picnic in the disputed beachfront area of Varosha, which lies along a UN buffer zone.

The island is split between the Greek-speaking southern two-thirds and a breakaway part of the north, which has been occupied by Turkey since 1974.

"Today in Cyprus there are two separate peoples, two separate democratic orders and two separate states," Erdogan said. "A two-state solution must be discussed and negotiated on the basis of sovereign equality," he said.

Erdogan made his comments at commemorations for the 37th anniversary of a Turkish Cypriot declaration of independence.

Turkey is the only country in the world that recognizes the Turkish Republic of Northern Cyprus (TRNC) and last week Erdogan said his visit would underline Ankara's solidarity with the region. However, the trip was described as an "unprecedented provocation" by the Nicosia-based government of the Republic of Cyprus.

"Ankara has absolutely no respect for international law, European principles and values, and its obligations towards the EU," the Cypriot presidency said in a statement.

Tensions have been raised recently as Turkey has clashed with neighbors Greece and Cyprus over maritime areas that are thought to have extensive hydrocarbon deposits.

The EU has said it may impose sanctions on Turkey next month over illegal natural gas exploration operations.

From luxury resort to ghost town

A proposed reunification of the island looks increasingly more remote after Turks in northern Cyprus voted for an Erdogan-backed Turkish nationalist, Erson Tatar, as president. UN-supported talks, which sought the reunification of Cyprus, failed in 2017.

The Turkish invasion of 1974 was launched in response to a Greek military junta-engineered coup — declared illegal by the United Nations — in Nicosia. The power grab was designed to ultimately allow the annexation of the whole island by Greece.

The invasion was eventually followed by the declaration of the TRNC on November 15, 1983. Since the republic was declared, Varosha - once dubbed the "Jewel of the Mediterranean" and a playground for the rich and famous — has been a plant-overgrown ghost town of dilapidated luxury hotels and restaurants.

Turkish soldiers partly reopened the seafront of Varosha on October 8, prompting a round of international criticism.

EU to consider sanctions on Turkey over Mediterranean gas drilling

The EU is preparing possible sanctions against Turkey, hoping to force concessions in Ankara's fight with Greece and Cyprus over Mediterranean gas reserves. Will they work? Bernd Riegert reports from Brussels.

Germany warns Turkey against 'provocation' in Mediterranean over gas exploration

German Foreign Minister Heiko Maas has called on Turkey to end its exploration of gas reserves in contested regions off Greek islands. Maas said Germany stood in solidarity with Cyprus and Greece as partners.