Varosha was a bustling beach resort frequented by celebrities in the early 1970s. Today, this seaside stretch of land in Northern Cyprus looks like a ghost town. Turkey's decision to reopen parts of Varosha, a seaside resort in the breakaway Turkish Cypriot north of Cyprus, has raised concerns both locally and internationally, days before an election in Northern Cyprus.

President Nicos Anastasiades of Cyprus' Greek-majority south called the opening a "flagrant violation of international law and the resolutions of the UN Security Council." Cyprus' close ally Greece has also warned that the issue will be raised with the European Union.

Varosha was abandoned in 1974 when Turkey invaded Cyprus, dividing the island along ethnic lines. For years before that, Varosha had been Cyprus' premier resort with a mile-long stretch of beach. Now, it looks like a ghost town with trees growing out of abandoned buildings facing the sea.

While some Turkish Cypriots hailed the move, Greek Cypriots carried out protests against the reopening of the region across the UN buffer zone. 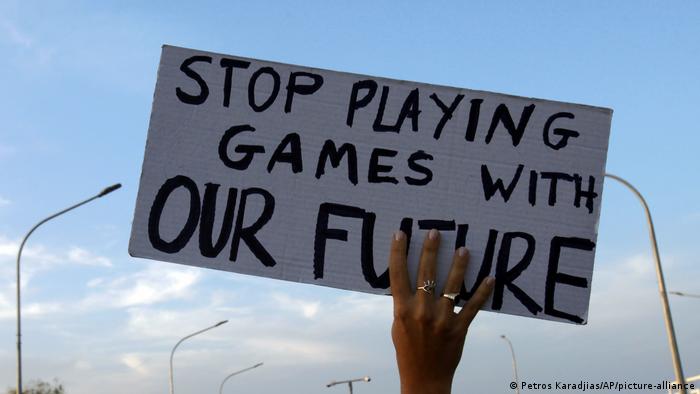 Greek Cypriots are protesting the reopening of Varosha's beach in Northern Cyprus.

"Even though I expected this, I shuddered as I watched those familiar places," Greek Cypriot and Varosha native Kyriakos Charalambides said, as he watched the opening from his home in Cyprus' capital city of Nicosia.

"It's a sorrow that cannot be consoled...Varosha is lost."

With Turkish Cypriot troops manning the site, the beach has now been reopened just three days before Turkish Cypriots elect a new leader who will represent them in peace talks facilitated by the United Nations.

Some say that the move may be an attempt by Turkey to sway the upcoming elections in the favor of nationalist leader and Turkish Cypriot Prime Minister Ersin Tatar, who announced the reopening after consulting Turkish President Recep Tayyip Erdogan.

He is set to challenge incumbent President Mustafa Akinci, who has criticized this move. Turkish Cypriots have reopened the beach at Varosha after it was closed in 1974.

"These measures are aimed solely at boosting the chances of one candidate," Akinci said, calling the reopening a "mistake that will put the Turkish Cypriot people in a difficult situation on the international stage."

While Akinci does not have the best relations with Turkey, he is the only Turkish Cypriot official to have international status. Notably, the Turkish Republic of Northern Cyprus, the name the northern part goes by, is only recognized as a state by Turkey.

The move to reopen the beach at Varosha comes when tensions are already high in the eastern Mediterranean and Turkey faces Greece and Cyprus over maritime disputes.