European leaders will hear demands for reform from Great Britain and discuss the migration crisis at a summit in Brussels. These twin challenges threaten the unity of the bloc as 2015 draws to a close. 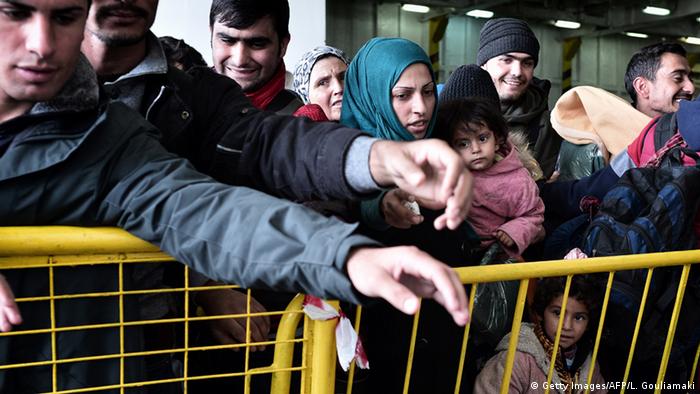 German Chancellor Angela Merkel plans to explore new ways to admit Syrian refugees to Europe at a two-day summit starting Thursday in Brussels with Turkey and several EU leaders. The meeting comes as Europe continues to struggle to control a migrant crisis that has divided the 28-nation bloc.

Merkel and European Commission President Jean-Claude Juncker will meet Turkish Prime Minister Ahmet Davutoglu and several EU leaders to discuss taking in Syrians directly from Turkey under an additional scheme that member states would be able to join voluntarily.

The summit will also discuss the latest scheme, a proposed 1,500-strong rapid reaction border and coastguard force, armed with the "right to intervene" in states that are not protecting their borders properly - regardless of whether the country agrees to the intervention.

There has already been pushback to the plan from Greece, Poland and Sweden, which fears loss of sovereignty to a superagency in Brussels.

Billions for Turkey under scrutiny

That comes on the heels of a 3 billion euro ($3.2 billion) EU deal with Turkey to control the outflow of refugees. That deal has been roundly criticized by rights groups.

"We have documented the arbitrary detention of some of the most vulnerable people on Turkish soil," said Amnesty International's John Dalhuisen. "Pressuring refugees and asylum-seekers to return to countries like Syria and Iraq is not only unconscionable, but it's also in direct breach of international law."

Even so, eight EU leaders from a so-called "coalition of the willing" headed by Merkel will hold a meeting with Davutoglu ahead of Thursday's main summit to discuss resettling refugees directly from Turkey.

The European unification project is seen as under threat amid rising populism and fears the EU's Schengen passport-free zone could collapse over fears of unfettered migration and vulnerability to extremist attacks. A divided EU has held a string of summits on the crisis this year to find a solution but so far found little common ground.

Previous plans have been stalled by divisions, with a deal for EU states to take in 160,000 refugees from overburdened Greece and Italy resulting in just 208 people being relocated so far, largely due to opposition from eastern European states. 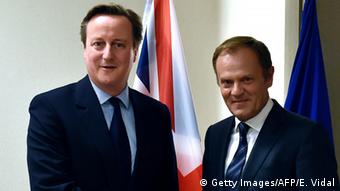 Cameron, left, will address why the UK wants better terms of membership when he meets with EU Council President Donald Tusk

Adding to the complexity, Britain will use the mini summit to press for concessions ahead of a planned referendum over whether to exit the EU.

British Prime Minister David Cameron has vowed to "get a great deal for the British people" before the 2017 plebiscite, which could see it become the first member to leave the bloc.

One core demand: a four-year wait before EU migrants working in Britain can claim welfare benefits.

"We still have a serious problem and we don't know how to move forward on the welfare issue," the unnamed EU official said.

Lord Weidenfeld: 'A family of Christians took me in as a refugee'

As a penniless young Jewish man, the celebrated UK publisher Lord Weidenfeld fled Nazi-occupied Austria with the help of British Christians. The nonagenarian now feels it is time to repay the debt. (16.12.2015)