The EU's fourth Eastern Partnership summit has wrapped up with the Western bloc and its eastern neighbors reaffirming their vows of cooperation. However, the summit also exposed strains over relations with Moscow. 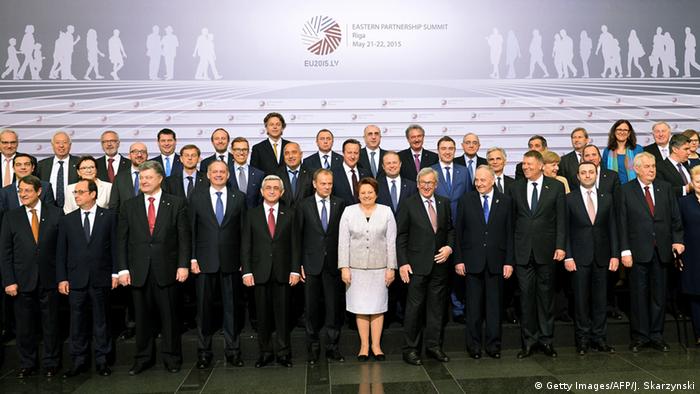 The declaration released by the European Union heads of state and government as well as their counterparts from six of the EU's eastern partners at the end of their two-day summit in Riga, was only agreed at after some difficult conversations.

European Council President Donald Tusk conceded that the negotiations to reach that final 13-page statement had been "very tough."

Perhaps this should come as no surprise, as three of the six eastern states, Ukraine, Moldova and Georgia have expressed interest in achieving eventual EU membership, while the other three - Armenia, Azerbaijan and Belarus - have not.

The main sticking points came over the wording of a joint position on the ongoing crisis in eastern Ukraine and Russia's annexation of Ukraine's Crimea more than a year ago.

In the end, the leaders were able to agree on wording that referred to the "illegal annexation of Crimea and Sevastopol."

They also called on "all parties to fully implement the Minsk agreements of September 2014 and the package of measures for their implementation of Februrary 2015," which were designed to bring an end to the fighting between pro-Russia separatists and government troops in eastern Ukraine.

However, the leaders also appeared at great pains not to further strain relations with Moscow, with the statement insisting that the EU's Eastern Partnership was "not directed against anyone."

Both German Chancellor Angela Merkel and French President Francois Hollande also played down the prospects for the eastern partners who are interesting in pursuing EU membership.

"The Eastern Partnership is not an instrument to enlarge the EU," Chancellor Merkel said on Thursday.

In terms of concrete measures, the biggest came when Ukraine signed a previously agreed deal that will see the EU grant Kyiv 1.8 billion euros ($2 billion) in loans.

The tensions weren't just over Russia and differences among the EU's eastern partners, but also among EU members themselves.

Britain's Conservative Prime Minister David Cameron, fresh from winning a majority in this month's general election, arrived at the summit to push for the EU reforms he is hoping to secure before calling an in-out referendum on the UK's membership in the 28-member bloc. Cameron has pledged to hold the referendum by 2017.

"I am not going to say I was met with a wall of love when I arrived," the British premier said. "I don't expect to find agreed solutions straight away ... It's not going to be easy," he conceded.

Meanwhile, Merkel and Hollande also met on the fringes of the summit with Greek Prime Minister Alexis Tsipras,whose government risks going into default if it fails to wrap up a reform agreement that satisfies its international creditors within the next fortnight.

Tsipras was seeking to get Merkel and Hollande push to break an impasse in technical level talks between Athens and its creditors. Merkel and Hollande offered assistance but said the most important thing was for Greece to focus on the talks with the European Commission, European Central Bank and the International Monetary Fund, which have been bankrolling Athens since it nearly went into default in 2010.

"The conclusion needs to be found with the three institutions and there needs to be very, very intensive work," the chancellor said.

The EU summit meeting with the bloc's eastern neighbors in Riga necessarily had to lead to disappointment. That's because Russia has politically outflanked Europe, writes Barbara Wesel. (22.05.2015)

EU leaders have gathered in the Latvian capital of Riga for a partnership summit with former Soviet countries. But so far Britain's insistence on an EU referendum and Greece's economic crisis have dominated talks. (22.05.2015)

British Prime Minister David Cameron has said restrictions on EU migrant access to the UK's welfare system would be an "absolute requirement" in renegotiations. The UK is due to hold an EU in-out referendum by 2017. (21.05.2015)