The Turkish president has cited Germany's refusal to free imprisoned Turkish citizens as a reason behind the refusal. His statement came days before Turkey votes in a referendum that could expand his presidential powers. 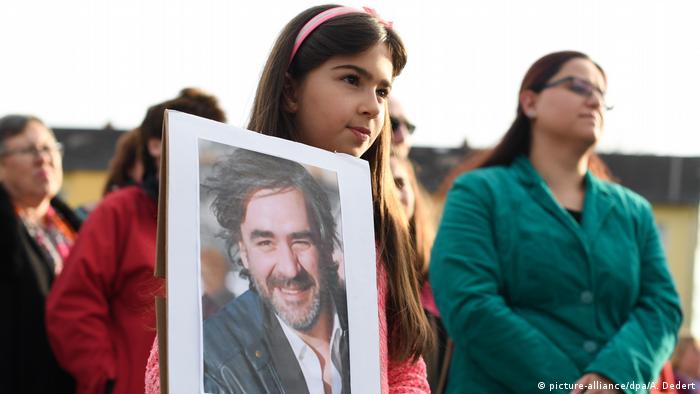 Yucel's imprisonment has galvanized Germans to demand his release

A honeymoon for German-Turkish reporter Deniz Yucel will have to wait.

The newly married Yucel, a reporter for the German daily "Die Welt" who has been imprisoned in Turkey since mid-February, will not be released as long as Turkish President Recep Tayyip Erdogan remains in power, the Turkish president promised on Thursday.

In an interview with the broadcaster TGRT in Istanbul, Erdogan ruled out Yucel's return to Germany: "as long as I am in office, never," the Turkish president said.

Erdogan cited Germany's refusal to hand over Turkish citizens suspected of terrorism as a reason behind his refusal. The German government has repeatedly called for Yucel's immediate release. His detention has intensified tensions between Germany and Turkey.

Read more: What you need to know about the Turkish-German row

The Turkish president also reiterated the accusations that Yucel had ties to the outlawed Kurdistan Worker's Party (PKK), claiming picture evidence proved the journalist was a "proper agent" and "terrorist." Both Erdogan and the justice system have yet to present evidence backing the accusations.

Yucel was detained on allegations of inciting hatred and spreading terrorist propaganda in support of the PKK and the banned Islamic cleric Fethullah Gulen, who Erdogan accuses of having masterminded an attempted coup in July 2016.

In the wake of the coup, Erodogan cracked down on journalists, imprisoning some 150 including Yucel.
Read more: What you need to know about the Turkish referendum

Erodagn's refusal to release Yucel as long as he holds office comes as Turkey prepares to vote on Sunday in a referendum that could vastly expand presidential powers. A "yes" vote in the referendum would entrench Erdogan as head of state and also make him head of government, resulting in what critics fear would be a de facto autocratic state.

After seven weeks, German diplomats are finally being granted access to Deniz Yucel, a German-Turkish journalist imprisoned in Istanbul on accusations of supporting terrorism. (04.04.2017)

German-Turkish journalist Deniz Yucel has been honored for his contributions to press freedom. The correspondent for the German newspaper "Die Welt" has been imprisoned in Turkey on "terror propaganda" charges. (05.04.2017)