Gulen versus Erdogan battle spills over into Germany | World | Breaking news and perspectives from around the globe | DW | 20.07.2016

Gulen versus Erdogan battle spills over into Germany

Germany's Turkish population is split after the coup attempt. No love is lost between followers of Fethullah Gulen and Recep Tayyip Erdogan. Leaders of associations connected to the two men are playing down the issue. 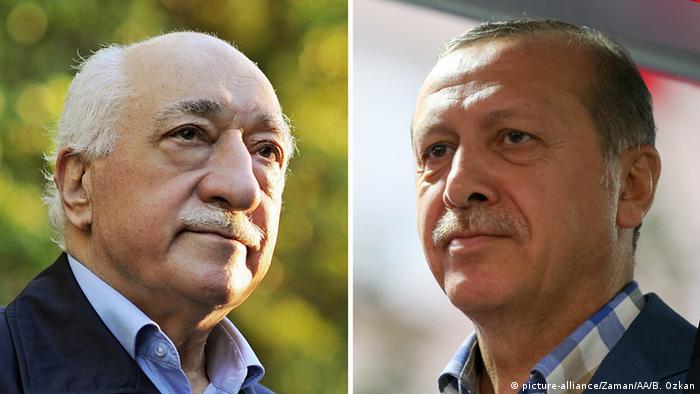 One can sense Ercan Karakoyu's agitation, his voice trembles as he speaks. There is a "massive" struggle against members of the Gulen movement here in Germany: "The situation is scary. Gulen movement facilities are being pelted with rocks, sprayed with graffiti and members have even been receiving death threats." Veritable witch hunts are underway on social media networks and text messaging platforms.

Karakoyu is the director of the Foundation for Dialog and Education. Since 2014, the foundation has served as the mouthpiece for the "Hizmet Movement" in Germany (Hizmet means "the Service" in English) - or as it is often called, the Gulen movement. It is made up of followers of Turkish preacher Fethullah Gulen, once a close companion of Recep Tayyip Erdogan and now considered to be his archenemy.

One of the groups that Karakoyu accuses of being responsible for the agitation is the Union of European Turkish Democrats (UETD). He says it is a kind of an AKP (Turkey's ruling Justice and Development Party) lobbying group, acting as the long arm of President Erdogan in Germany.

"Other mosque associations, such as DiTiB, have also hung signs saying that Gulen supporters have no place in their communities." He mentions three specific instances: in Hagen, Duisburg and Günzburg.

With some 700 mosques under its aegis, DiTiB, the Turkish-Islamic Union for Religious Affairs, is the largest mosque association in Germany. When asked about Karakoyu's accusations, representatives seem surprised. 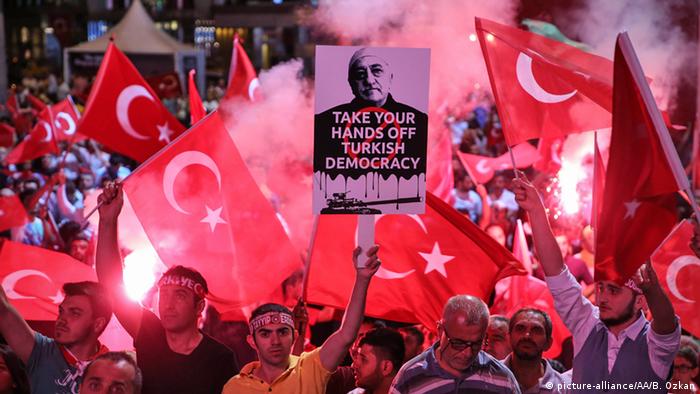 Thousands of Erdogan supporters protested against the Gulen movement in Istanbul

The press spokesperson for DiTiB, Ayse Aydin, categorically denies them: "We are a Muslim religious community, and we never turn away anyone who wants to pray in a mosque." As a rule, all DiTiB mosques are open to anyone that wants to pray.

Escalating after the putsch

DiTiB is closely associated with state religious authorities in Turkey. The conflict between it and the Foundation for Dialog and Education, is thus also a conflict between supporters of Erdogan and Gulen. The quarrel puts a spotlight on the mood of the Turkish community in Germany, which has shown deep divisions in the days following the failed putsch in Turkey.

Dr. Christoph Ramm is an expert on Turkey at the University of Bern, in Switzerland. He is not in the least surprised that things are turbulent at the moment: "The Turkish government calls the Gulen movement a terrorist organization. They have made a massive attempt to remove all Gulen supporters from the justice system, the police force and the military." Media outlets that are loyal to Gulen, such as "Zaman", the most widely circulated newspaper in Turkey, have also been affected by these "purges."

Influential media reporting is one of the fundamental pillars of the Gulen movement. Officially, it propagates a peaceful Islam with Turkish characteristics. The core of the movement is education, and it also links religious values with a sensibility for economic activity. Meanwhile, the movement is active in more than 140 countries, mostly building schools and other educational institutions. Nothing is known about the source of its financing, nor about the exact number of its followers. 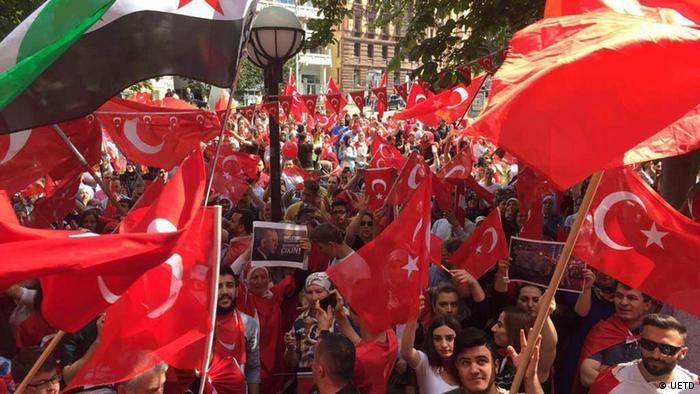 Ramm has doubts about the movement's objectives: "No one has any idea how this network is organized. It is reminiscent of a sect in that sense."

The Islamic scholar is also deeply concerned about the manner in which the Erdogan government is going after the Gulen movement.

"The government is practically conducting a witch hunt against Gulen supporters," he says in describing the new dimension of the conflict, adding: "If you live with a paranoid mindset in which you are surrounded by enemies, then I guess it makes sense."

It is a paranoia that has in part begun to spill over into Germany. For Karakoyu, Erdogan supporters in Germany also bear blame for the escalation: "For instance, the UETD takes up Erdogan's rhetoric word-for-word, and then passes it on to the German-Turkish community." The result, says Karakoyu, is that "the same animosities one finds in Turkey can now be found here."

At the Erdogan-allied UETD, members are obviously trying to calm the situation. Queried by DW, the said if there have in fact been such instances, then they are diametrically opposed to the principles of the organization. Regarding calls for violence on social media networks, "we would like to point out that it is not particularly difficult to use photos, names or emblems in an illegal manner."

Following the failed revolt, Turkey is going through another democracy test. The initial solidarity among political parties looks hopeful, but will it last? Further crackdowns are a serious concern says DW's Seda Serdar. (17.07.2016)