Erdogan lashes out at West and Russia for recognizing Armenian killings as genocide | News | DW | 25.04.2015

Turkish President Erdogan has slammed the world leaders for recognizing the 1915 massacre of Armenians as genocide. Erdogan said countries like Germany, France and Russia should first "clean their own stains." 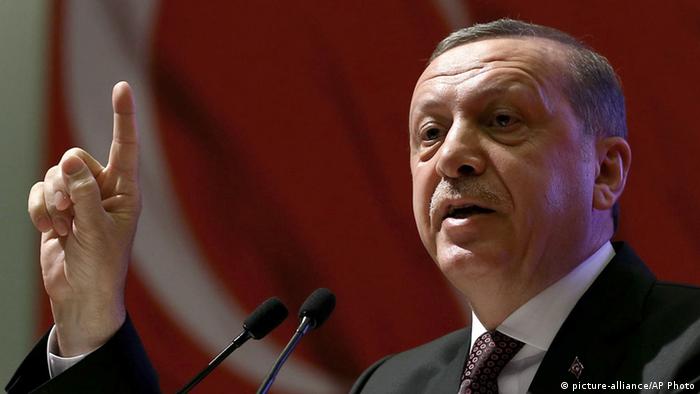 Recep Tayyip Erdogan has strongly criticized the European Union and the US for using the word genocide to describe the massacre of Armenians by Ottoman Turks a century ago.

The Turkish president accused Germany, France and Russia of "supporting claims based on Armenian lies."

Erdogan also accused the United States of siding with Armenia, despite the fact that US President Barack Obama stopped short of calling the killings "genocide" and instead used the Armenian term Medz Yeghern (great catastrophe) for the World War I killings.

"The latest countries to speak of genocide are Germany, Russia and France. What happened during the two world wars that had been initiated by Germany in the past century is before our eyes," President Erdogan was quoted by Turkey's state-run Anadolu news agency as saying on Saturday. 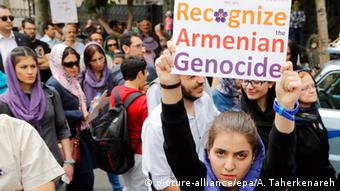 "First, they (Germany, Russia and France) must, one by one, clean the stains on their own histories," he added.

The US is siding with "hatred," the president said, also slamming the European Union, which on April 15 voted to call the events genocide.

"Hey European Union! Don't offer us any thoughts. Keep them to yourself," Erdogan said.

During the centenary commemorations of the massacre on Friday in Armenia, French President Francois Holland said Turkey must recognize the killings as genocide, while Russian President Vladimir Putin also used the word that Ankara strongly objects to.

Historians estimate up to 1.5 million Armenian people were murdered around the time of the First World War. Turkey says the victims of the event were merely casualties of war, arguing that the toll has been exaggerated.

Earlier this month, Pope Francis described the killings as "the first genocide of the 20th century," drawing the wrath of Turkey, which recalled its Vatican envoy in protest.

The Turkish government's statement, issued late on Friday, claimed the German president didn't have "the right to attribute to the Turkish people a crime which they have not committed."

It also warned Germany that it had angered its large Turkish population, saying they "will not forget and forgive President Gauck's statements."

On Friday Germany's parliamentary speaker, Norbert Lammert, said that Germany's own history made it even more important for it to stand up on the subject.

"We Germans cannot lecture anyone about dealing with their past, but we can, through our own experiences, encourage others to confront their history - even when it hurts," he said.

Germany's parliament is expected to vote on a motion to officially declare the killings of Armenians as genocide before its summer break.

The draft resolution, published online earlier in the week, was careful to point out that Germany's role in the Holocaust during World War II was even worse than the Turks' attack on Armenia.

More than 20 parliaments globally now recognize the event as genocide.

Commemorations have taken place around the world to mark the centenary of the massacre.