The German churches have commemorated the suffering of hundreds of thousands of Armenians 100 years ago. They joined President Joachim Gauck in calling for an honest view of history. 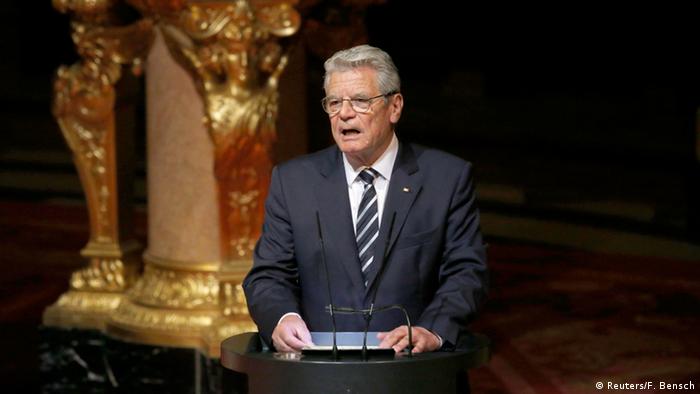 It was the word the audience and the media were waiting for. German President Joachim Gauck spoke of genocide, commemorating the fate of as many as 1.5 million Armenians murdered in the Ottoman Empire a century ago. The tension in Berlin's packed Cathedral Church was palpable.

Gauck's speech followed an ecumenical service the like of which is seldom seen, with a tremendous variety of colors and traditions. It brought together the leaders of the Protestant, Catholic and Orthodox Christians in Germany - cardinals, council presidents, an exarch, archbishops of different churches; Armenian clerics with their pointed hats often likened to Mount Ararat; dark Ethiopians in purple caps, Greeks, Syrians, Copts with ceremonial black hats and large crosses on their chests; and a female Methodist bishop - the cathedral preacher.

They came to commemorate the genocide that began on April 24, 1915 and claimed the lives of hundreds of thousands of people, the vast majority of them Orthodox Christians: Armenians, Arameans, Assyrians, Turkish Greeks. A hundred years ago, the Ottoman Empire was home to a lively ethnic and religious diversity of the region. 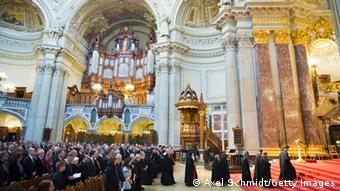 It was a colorful ecumenical service

"Mass murder," says Cardinal Reinhard Marx, president of the German Bishops' Conference. "A crime committed by the Young Turk regime," according to the Chairman of the Evangelical Church in Germany, Heinrich Bedford-Strohm.

"How many wars must we endure? How long will we be oppressed?" sang the Orthodox choir to the accompaniment of melancholy music.

The service had been planned for a long time, but it was only officially announced ten days ago. In holding it, the churches have brought fresh impetus to a painfully long and rather timid political debate. The German president's appearance at the ceremony provided the fuel. A few days ago the president's office called the Foreign Ministry, and presumably the Chancellery as well, and suddenly the coalition parties' parliamentary groups found themselves working on a motion describing the atrocities of 1915 as "genocide." It was put forward for debate in the German Bundestag just 12 hours after the service in Berlin.

The Christian Democrats, Christian Socialists and Social Democrats have all used, almost verbatim, the sentence formulated by President Gauck: "The fate of the Armenians is exemplary for the history of mass destructions, ethnic cleansings, expulsions and, yes, genocides, that marked the 20th century in such a terrible way." The term "genocide" is buried in the text of the new bill, but at least, unlike in 2005, it's no longer just in the official foundation. However, the coalition parties haven't given in to pressure from the opposition, which has put forward motions with the term "genocide" right up there in the title.

The term is a very loaded one, even more so at present. When Pope Francis used it two weeks ago, the president of Turkey, Recep Tayyip Erdogan, threw a fit and described it as "nonsense." The Turkish government recalled its ambassador from the Vatican. It has been recalling quite a few ambassadors lately, most recently from the Austrian capital, Vienna, on Wednesday (22.04.2015). The issue has turned into a confrontation with the European Union and dozens of other countries on one side, and Turkey on the other.

However, as well as calling the mass murder, the extermination, the genocide, by name, the speeches during and after the service also spoke of reflection, and the hope of reconciliation, with corresponding appeals to Turkey. 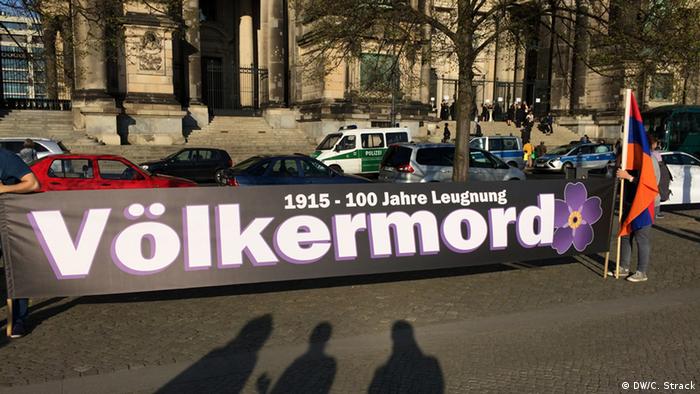 A demonstration outside later made its way to the Brandenburg Gate

In his 17-minute speech, Gauck used the term "genocide" only once. The issue, he said, was not one of terminology but of recognizing and mourning the "systematic extermination of a people." He went on to describe developments in the "ideology of the Young Turks" based on ideas of unity and purity as a "genocidal dynamic, to which the Armenian people fell victim." He stressed that, "in remembering it, we are not putting anyone who is alive today in the dock," but that the victims' descendants were right to expect historical facts to be recognized - and with them also the "historical guilt" of those alive today.

This, Gauck said, also applied to Germany, which was complicit in the Armenians' death. Only those who did not deny their guilt, he said, were able to shed it: "Without truth, no reconciliation." And no dictator, or anyone who regarded ethnic cleansing as legitimate, should ever be allowed to expect their deeds to be ignored. Sadly, some of Gauck's words about 1915 were just as relevant for 2015. When Gauck finished speaking, there was prolonged applause.

Heinrich Bedford-Strohm of the Protestant church also spoke of "German complicity" in the genocide of 1915, and the necessary "difficult step of looking again at one's own history." Only when the German side calls it by its name, he said, could it "encourage Turkey to address the crime of genocide sincerely and objectively."

Cardinal Reinhard Marx quoted Pope Francis: "Whenever memory fades, evil allows wounds to fester." The perpetrators' descendants should, he said, be able to look history in the eye and "hope for a new beginning that will ultimately bring honor to their country." In a reference to the suffering of minorities in the Middle East today, the cardinal pointed out that "one of the desert camps the Armenians were taken to at the time was just outside Mosul…"

"That was a worthy, important commemoration," said Benjamin Bilici, on his way out of the cathedral. The 47-year-old had made a special journey from Düsseldorf to Berlin for the ceremony, along with several others. Bilici was glad that Gauck and the priests had used the word genocide to describe the atrocities of a century ago. "That was important for the processing of the trauma," he said, "so that the subject will vanish from the agenda and we can turn our attention to other matters."

Hundreds of people, the majority of them Armenian, congregated outside in front of the cathedral, watched over by a small police presence. As dusk fell, candles were lit. Big banners proclaimed, "Tell the truth," and, "100 years of denial - genocide." Slowly the people set off in the cold of the Berlin evening, on a silent march of remembrance towards the Brandenburg Gate.

Amid tensions over Turkey's refusal to call Ottoman forces' killings of Armenians genocide, the Armenian Church declared the victims to be saints. The canonization was held ahead of centennial commemorations. (23.04.2015)

Ghosts of the past haunt Turkish-Armenian border

The Turkish-Armenian border has been shut since 1993 despite thousands of years of shared history. Residents on both sides hope the countries can settle their differences. Jacob Resneck reports from the frontier. (23.04.2015)

Turkey has recalled its ambassador to Vienna after Austrian lawmakers called the 1915 Ottoman massacre of Armenians "genocide." Many scholars and two dozen governments have recognized the 1915 killings as such. (22.04.2015)