On the 100th anniversary of the slaughter of Armenians, Pope Francis has described the mass killing by the Ottoman Empire as "the first genocide of the 20th century." The move could strain diplomatic ties with Turkey. 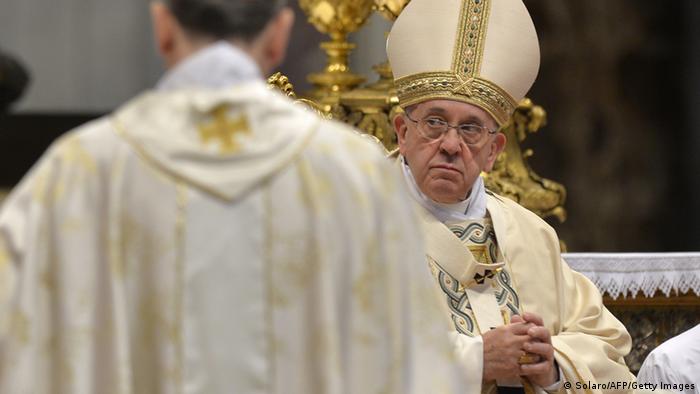 Pope Francis addressed the systematic killing, which took place a century ago, during a mass in Saint Peter's Basilica in the Vatican on Sunday. Also attending the mass, which included elements of the Armenian Catholic rite, was Armenian patriarch Nerses Bedros XIX Tarmouni and the country's President Serzh Sargsyan.

"In the past century our human family has lived through three massive and unprecedented tragedies. The first, which is widely considered 'the first genocide of the 20th century', struck your own Armenian people," the pontiff said, citing a 2000 statement signed by late pontiff John Paul II and the Armenian patriarch.

In the joint statement 15 years ago, Pope John Paul II said "the Armenian genocide, which began the century, was a prologue to horrors that would follow."

"We recall the centenary of that tragic event, that immense and senseless slaughter whose cruelty your forebears had to endure," Francis said on Sunday.

"It is necessary, and indeed a duty, to honor their memory, for whenever memory fades, it means that evil allows wounds to fester," he added. 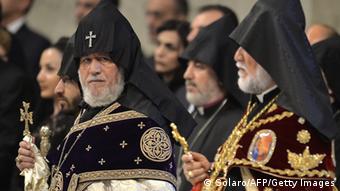 The pope's use of the word "genocide" will likely test diplomatic relations with Turkey, however, and could risk alienating an important ally in the fight against radical Islam.

Armenians say up to 1.5 million of their kin were killed between 1915 and 1917 as the Ottoman Empire was falling apart. In Armenia, the killings are known as "Metz Yeghern," meaning "Great Evil."

Turkey, however, has long has long denied that the deaths constituted genocide, arguing that 300,000 to 500,000 Armenians and as many Turks were killed in clashes during the First World War when Armenians rose up against their Ottoman rulers and sided with invading Russian troops.

In 2014, Turkish Prime Minister Recep Tayyip Erdogan offered unexpected condolences to Armenians for the imposed deportation of their ancestors, which he described as having "inhumane consequences."

At the same time, however, Erdogan made it clear that while modern Turkey tolerated the genocide accusations, the country did not share them.

The mass on Sunday was held ahead of the official commemoration of the murders which will take place on April 24.

Witness or accomplice? At a congress in Berlin, historians have been debating Germany’s role in the genocide of Armenians 100 years ago. New findings show that Germany’s complicity is greater than previously assumed. (06.03.2015)