Emmanuel Macron has said France, the US and UK will decide in the coming days whether to respond to a suspected chemical attack in Syria. Macron's remarks came after talks with Saudi Prince Mohammed bin Salman. 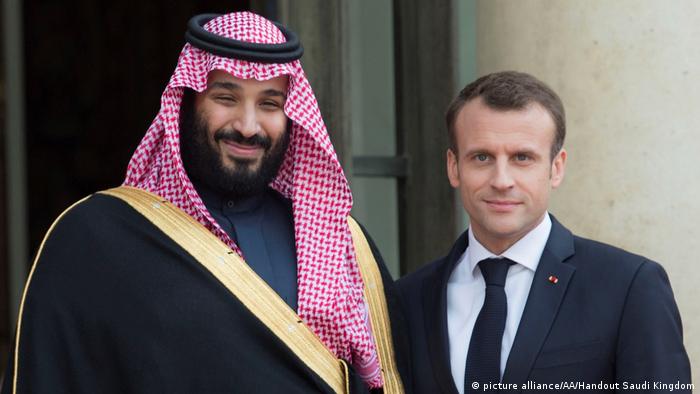 French President Emmanuel Macron said on Tuesday that France would consult with the US and UK on whether to carry out military strikes on the Syrian regime's suspected chemical facilities.

Macron said France and its allies would decide "in the coming days" on what response to take. "Our decision will not target allies of the regime or attack anyone but rather attack the regime's chemical capabilities," he added, insisting he did "not want an escalation."

However, Macron said he wanted to issue a "strong and joint response" to Saturday's suspected chemical weapons attack on the Syrian rebel-held town of Douma, which activists and rescuers say killed at least around 40 people.

The use of chemical weapons in Syria, the French president reiterated, was a "red line" for France.

Macron's comments followed US President Donald Trump's promise on Monday that the US would issue a forceful response to the Douma attack, suggesting possible military action.

The regime of Syrian President Bashar al-Assad and its key ally Russia have denied allegations from the West that it was behind the attack.

Saudi Arabia could be possible partner in Syria effort

Macron's remarks came on the back of talks with Saudi Crown Prince Mohammed bin Salman in Paris, in which the Saudi prince said Riyadh could be prepared to take part in military action in Syria, if it was called on by its allies.

"If our alliance with our partners requires it, we will be present," Prince Mohammed told reporters during a joint news conference alongside Macron, wrapping up a three-day Paris visit.

Earlier on Tuesday, Saudi Foreign Minister Adel al-Jubeir said the Kingdom wanted the US to remain involved in the Syria conflict. US President Donald Trump had prior to Saturday's attack announced his intention to pull US troops out of Syria in the near future.

Read more: Opinion: A US pullback from Syria is a terrible idea

Macron also said on Tuesday that he agreed with Saudi Arabia on the need to push back against Iran's expansionist policies in the Middle East.

"This strategic vision means reducing all the projects of expansionist political Islam which could feed other forms of terrorism and destabilize the region," Macron said, referring to Iran, Saudi Arabia's regional rival.

Macron also announced an upcoming conference aiming to boost humanitarian support for Yemen, where a Saudi-led coalition has conducted a sustained and deadly military campaign against the Iran-backed Houthi rebel forces.

The resulting humanitarian crisis and blockade on Yemen has prompted global condemnation of the Saudi-led campaign.

Macron stressed the need for "respect for international humanitarian law" from all sides in the conflict, adding that France would "continue to be extremely vigilant on this point."