Egypt′s bloody past and uncertain future | World| Breaking news and perspectives from around the globe | DW | 25.08.2013

After military and police forces killed hundreds of people, Egyptians are left wondering - and fearing - what the future holds. DW examines recent events in the country and what could be in store for Egypt. 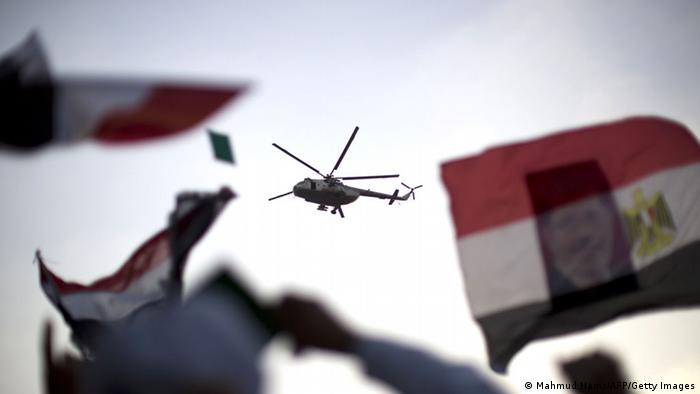 Since being overwhelmed with euphoria after removing autocratic ruler Hosni Mubarak from power in 2011, Egypt has recently seen its first democratically elected president overthrown by the military and a crackdown on protests supporting him has left hundreds dead.

Many of the demonstrators who threw out Mubarak now wonder where to put their support as the largely peaceful revolution they sparked turns into fractious fighting and the society that was united in 2011 becomes increasing politically fragmented.

DW looks back at how Egyptian society was divided and what could be in store for Egyptians.

Egypt's government portrays the unrest in the country as a fight against Islamist extremists. Experts warn though that a ban of the Muslim Brotherhood would only radicalize the conflict. (19.08.2013)

After Friday prayers, renewed violence erupted in Cairo. Protesters called it the "Day of Rage." Police and military have begun to use live ammunition. But the Islamists are not backing down. (17.08.2013)

Egyptian police have cleared the Muslim Brotherhood's protest camps; Vice President ElBaradei has resigned as a result. Violence is no solution, says Ronald Meinardus, head of the Friedrich Naumann Stiftung in Cairo. (14.08.2013)

Egypt's Tamarod and the military united for now

Egypt's Tamarod movement mobilized thousands and paved the way for the coup against Mohammed Morsi. They depend on the support of the military, but will the alliance last? (03.08.2013)

West caught in dilemma over Egypt

The West is stuck in a dilemma over Egypt - it cannot endorse Mohammed Morsi's overthrow, but neither does it want to condemn the coup. On top of that, the US and the EU barely have any leverage over Cairo. (30.07.2013)

EU fears the worst in Egypt

After the recent violent escalation in Egypt, European Union representatives are calling for political dialogue to resume. But so far, there's little sign of a targeted or collective EU effort. (15.08.2013)

The number of victims in Egypt is constantly on the rise. Germany is urging all sides to end to the bloodshed and to resume negotiations. The Foreign Ministry has discouraged its citizens from travelling to Egypt. (15.08.2013)

The royal family in Saudi Arabia is anxiously watching Egypt, as clashes between the Muslim Brotherhood and the country's military continue. The conflict underscores that religion and revolution can go hand in hand. (25.08.2013)

Riots in the streets, state of emergency, curfew: Egypt descends into chaos. The military has taken over power. It is the return of the old Mubarak guard, Egypt expert Cilja Harders told DW. (16.08.2013)