Opinion: Robbed of democracy | World| Breaking news and perspectives from around the globe | DW | 09.08.2013

Can political uprisings in Cairo and Tunis bring about democracy? It'll be tough as the fronts between secular and Islamist groups are more entrenched than ever and there is little Europe can do, says DW's Ute Schaeffer.

Barriers and barbed wire are all that are preventing a fall into complete chaos: on the one side are the demonstrators pushing for a secular political system. On the other are representatives of political Islam. Until recently, the confrontation in Cairo was between the secular Tamarod campaigners and the Muslim Brotherhood. Meanwhile, groups of angry citizens have gathered in Tunis and called for the resignation of the Islamist-led government. 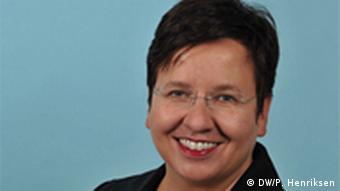 What is occurring in Egypt as well as Tunisia is what many have long feared: the "cold civil war" is escalating. In Egypt, the military has quashed it - using questionable methods. Whether it can be stopped in Tunisia remains to be seen.

Economically, politically and socially, this is bad news. The current violence and confrontations will cost Tunisia and Egypt years of progress. They will keep away investors and prevent a return to any real form of normality.

But the particularly bad news is for democracy. The events of December 2010 in Tunisia that sparked so much hope are at risk of petering out. What was a loud call for democracy has remained an empty promise for most Egyptians and Tunisians. Changes in both countries have neither brought justice nor improved living conditions. Instead, conservative Islamist governments with little political experience have taken over in Egypt and Tunisia.

Danger for the entire region

What has emerged is what the dictators had stifled or covered up: the gap between rich and poor, differences between urban and rural populations, and especially the irreconcilable conflict between Islamists and secularists. The immense pressure to change and the open political system led to the societies falling apart. Three years after the shared political uprising, there is little that continues to hold them together. That poses serious risks to the entire region and for its neighbors in Europe. Tunisia is at Europe's doorstep and Egypt is a key state in the Middle East. The path both countries take will decide the political future of a strategically important region.

And yet, the rest of the world is taking a cautious approach as failure threatens to engulf the democratic uprisings. Disinterested? Possibly. But mainly the response has been helplessness.

As a reminder: at the end of July, 80 members of the Muslim Brotherhood were killed by the Egyptian military and there was no clear response from the Wes. The West also ignored the rapid spread of religious extremism in the countries. The former militias created to protect the revolution turned into young, violence-prone guardians of religion. They imposed an Islamic dress code and style of life and intimidated the population. The support for violent Salafists is visibly growing in both countries. Islamists in Tunisia are suspected of being behind the murders of two secular politicians.

There are no good dictators

The current chaos in the two countries has led some to call for a "hard" hand to take the reins. Some in Cairo and Tunisia say that the old dictators were better than the anarchy they see today. That could be the reason why when the generals took control of Egypt in the name of stability by repressing protests, imprisoning the president and putting themselves back in power, only a few people called the event what it really was: a coup.

But there are no good dictators! It is a mistake to believe that autocrats or despots can provide more security or stability. At best, they create the temporary appearance of security. That is exactly what the Arab uprisings have shown. Today's chaos has been inherited from dictatorships. Dictators prevent the participation and growth of a civil society capable of taking action. Dictators smother dissent, opposition and objection. In doing so, they prevent the difficult exchange of ideas and interests that are left to suffocate under the autocratic regime. Until the pressure grows and explodes.

We've seen that kicking a dictator out of office is one thing - and building up a democratic society is another. As bitter a pill it is to swallow, it does not look like the uprisings will be successful in the foreseeable future. Democracy is the constant search for a compromise, for a common denominator. It requires reliable institutions, clear rules, tolerance and constant debate.

The West has also lost out: the United States, France and Europe all supported the old dictators for decades. Neighboring Arab countries are regarded as allies despite their massive involvement in the chaos, which they use to promote their own interests.

For a long time to come, Europe will have to come to terms with the region's smoldering political situation. The chaotic reorganization should be supported - but only to an extent. But the West should never make the mistake of believing in and supporting "good dictators" ever again.

Ute Schaeffer is editor-in-chief of Deutsche Welle. The focus of her journalistic work is German and European foreign and development policies, as well as political, economic and social development in Africa and Eastern Europe.

Morsi supporters insist on his return to power

Despite attempts to bring the two sides together, Egypt's Muslim Brotherhood insists on the reinstatement of ousted President Mohammed Morsi. A violent crackdown on their camp would most likely end in a bloodbath. (09.08.2013)

Days of protests against the transitional government have rocked Tunisia. People and politicians are divided and a compromise seems far off as fronts harden and calls for leaders to resign mount. (09.08.2013)