President Abdel-Fattah el-Sissi has reaffirmed his support for a two-term limit for the office of the president. He did not, however, confirm if he intended to run for a second term in 2018. 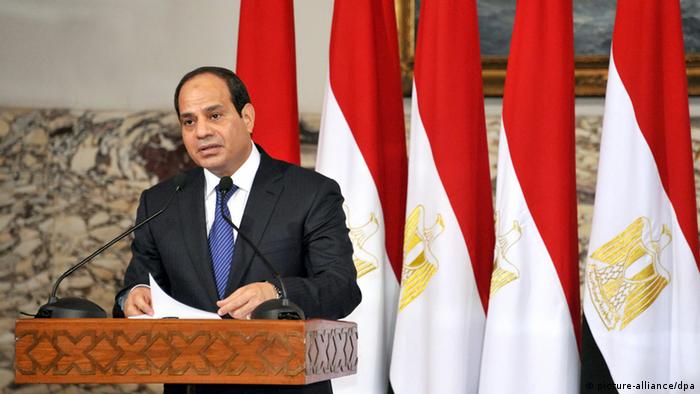 In an interview with a US broadcaster, Egypt's president rejected calls by several pro-government lawmakers and media figures to amend the constitution in favor of allowing a president to serve more than two terms. It was the first time that President el-Sissi had publically spoken about the issue.

"It doesn't suit me as a president to stay one more day against the will of the Egyptians," el-Sissi told CNBC over the weekend. "We will not interfere with (the constitution)…I am with preserving two four-year terms."

Elected in 2014, el-Sissi must now decide whether to run for a second term. He has not yet announced his intention to run in 2018.

El-Sissi, a former army chief, was elected to office 2014, a year after he led the military's ouster of an elected but unpopular Islamist President Mohammed Morsi.

Rights groups have repeatedly criticized el-Sissi's government for its record of abuses and repression.

Under his rule, Egypt has seen a large-scale crackdown on dissent, the jailings of several human rights activists and journalists. Other dissidents have been slapped with travel bans over allegations of harming national security.

In a report in September, the Human Rights Watch (HRW) denounced "widespread and systematic" use of torture by Egyptian security forces, a charge that el-Sissi has denied.

The country's crackdown on homosexual men has been condemned by various organizations, including the United Nations.

The German chancellor has urged Egyptian authorities to ease limitations on civil society organizations. She has also pushed for further cooperation on bolstering Egypt's border security after meeting President el-Sissi. (02.03.2017)

An Alexandria court has sentenced a lawyer to ten years in prison and five years of house arrest for a Facebook post that allegedly insulted the Egyptian president. Amnesty International slammed the move as "shocking." (13.04.2017)

Egypt's Foreign Ministry first snubbed then relented and met US presidential adviser - and Trump son-in-law - Jared Kushner. The US reportedly cut aid to Egypt due to human rights abuses. (23.08.2017)