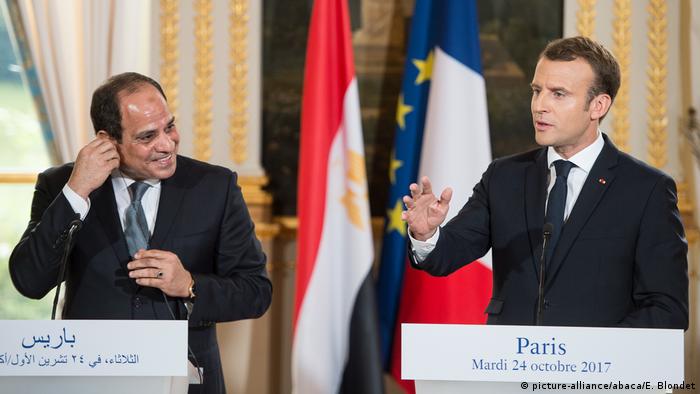 "I believe in the sovereignty of states, and therefore, just as I don't accept being lectured on how to govern my country, I don't lecture others," Macron said at a joint news conference with el-Sissi in Paris on Tuesday.

"My deeply held conviction is that it's in President el-Sissi's interest to accompany the defense and consolidation of human rights by the Egyptian state, in the context that only he can be the judge of," Macron said.

The French president had faced calls from rights groups to publicly call out the Egyptian government for a crackdown on the media, NGOs and political opponents ahead of the 2018 presidential election.

The groups have accused France of trading principles for economic and security interests, referring to the strengthening of economic and military ties between the two countries under el-Sissi.

A Macron aide, however, told journalists that during the 50-minute meeting with el-Sissi, the French president did bring up the issue of a dozen cases of alleged abuses of freedoms, including those of journalists and human rights activists behind bars in Egypt.

This, French officials said, was in line with the Macron administration's new policy of not openly criticizing countries over human rights.

"We do not practice torture and ... we must be wary of all the information published by rights organizations," he said.

"When it comes to human rights, we're not evading an answer but I hope that we understand it in its true context of a country in Egypt's situation. We are not in Europe, with its intellectual, cultural, civilization and human advancement. We're in a different region."

El-Sissi's government has come under strong criticism from Human Rights Watch (HRW), which in a report in September denounced "widespread and systematic" use of torture by Egyptian security forces. Its crackdown on gay men has been condemned by various organizations, including the United Nations.

Egypt is a major buyer of French military equipment, with orders worth more than €5 billion ($5.8 billion) since 2015.

The head of HRW in France, Benedicte Jeannerod, called on Macron to end "France's disgraceful policies of indulgence toward el-Sissi's repressive government."

Egypt has detained an Al Jazeera producer for "provoking sedition" and spreading "false news" in the country, reigniting the tensions between Cairo and the news network. Al Jazeera claims their employee was on vacation. (26.12.2016)

France to sell Mistral warships to Egypt instead of Russia

Egypt has agreed to buy two Mistral warships from France as the country faces an insurgency and instability on its borders. The helicopter-carriers were originally slated to be sold to Russia. (23.09.2015)