Economic advisers: Coronavirus may see German GDP dip by over 5% | Business | Economy and finance news from a German perspective | DW | 30.03.2020

In a special report published Monday, Germany's panel of economic advisers to the government has warned a recession in Europe's powerhouse is inevitable. In a worst case scenario, output will shrink by 5.4%. 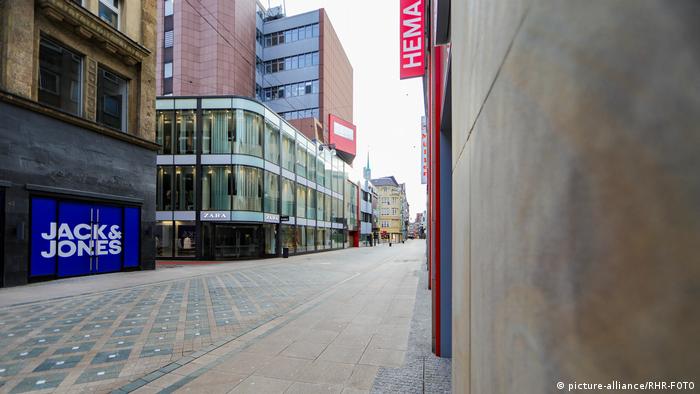 In its special report handed to the government on March 23 but published only on Monday, the German Council of Economic Advisers said that because the country is in virtual lockdown a recession will be inevitable in the first half of the year.

The panel analyzed the potential economic fallout of the coronavirus pandemic on the basis of different scenarios. In their baseline model, the advisers expect Germany's gross domestic product (GDP) to drop by 2.8% this year, should the lockdown end fairly soon, meaning that the economic situation could normalize over the summer.

For its part, the government has so far only said the restrictive measures in place would by no means be lifted before April 20.

Things may turn out even worse

In its worst-case scenario, the advisers said the economy could contract by up to 5.4% this year, should the country see "a more V-shaped recession curve," with much longer and widespread halts to production.

While a 5.4% drop in GDP seems like a drastic decline, other researchers have been even more pessimistic. Among the institutions painting a darker picture is the German Economic Institute (IW), which noted last week that a 10% contraction of the economy could not be ruled out, should the current lockdown continue until the end of June.

Right now, almost 1 in 5 German companies say they are at acute risk of insolvency due to the coronavirus crisis. Helping such firms in need is a cornerstone of the German government's unparalleled aid package, which lawmakers approved last week. It provides €750 billion ($831.6 billion) to help cushion the impact of the pandemic by aiming to keep firms afloat and many workers employed on a short-term basis.

In its special report, the panel of economic advisors praised that stimulus package, saying it came at just the right time.

It called on the government to do everything in its power to curb the spread of COVID-19. Once the threat was gone, the advisors added, policymakers were well-advised to support what they hoped would be a speedy recovery of the economy in 2021 for which they expected between 3.7% and 4.9% growth.

The head of the panel, Lars Feld, said that for the time being, though, "working on a clearly communicated normalization strategy" would be of the utmost importance as would efforts to stabilize private households and companies and thus reduce uncertainty in society at large.

A record of special reports

It's not the first time that the Council of Economic Advisors has issued a special report. It did so for instance back in March 2007 to address Germany's ballooning public debt. The panel also published a special report in July 2015 to deal with Greece's economic hardships and the stability of the euro.