The coronavirus outbreak, which has put the global economy under a lockdown, is being compared to the 2008-09 downturn. But in some industries, the virus may have already caused the biggest meltdown in history. 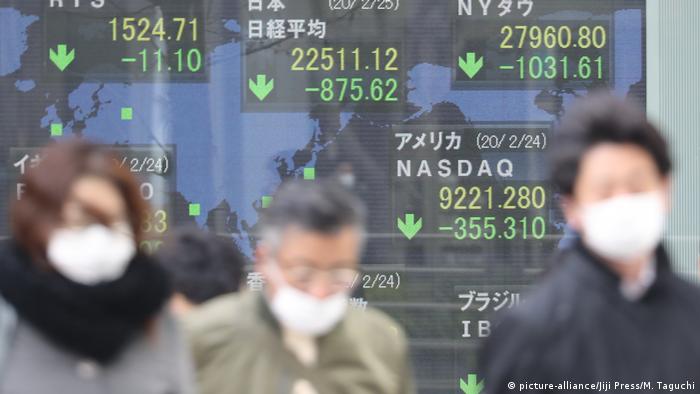 The pandemic, which has claimed thousands of lives across continents, has virtually brought the world economy to a standstill with millions of people placed under lockdown and global supply chains thrown into disarray due to the virus wreaking maximum havoc in China — the world's factory.

While many are already comparing the current crisis to the 2008-09 recession, most experts do not expect it to be as bleak and are forecasting the global economy to swiftly recover in the second half of the year, provided the outbreak fizzles out by then. Yet, the novel coronavirus has dealt historic blows to the airline industry and oil markets. DW asked experts to compare the economic damage caused by the two crises.

The aviation industry, suffering from cut-throat competition, price wars and poor financial health, has been clobbered hardest by the pandemic, which has virtually ground air travel to a halt and threatens to bankrupt most airlines. British Airways CEO Alex Cruz described the situation as a "crisis of global proportions like no other we have known."

"Some of us have worked in aviation through the global financial crisis, the SARS outbreak and 9/11. What is happening right now as a result of COVID-19 is more serious than any of these events," he said in a memo to staff.

"When we see well-capitalized airlines like Lufthansa making statements about the need for state support, then we know things must be bad," Rob Morris, global head of consultancy at Ascend by Cirium, told DW. "Clearly, for every airline globally the objective for 2020 will be to survive through this crisis. I fear there are many who will not be able to achieve that, and we will almost certainly start to see some significant airline failures shortly."

The oil markets are in no better shape. Global oil consumption is expected to witness its biggest fall in history, hurt by a temporary ban on travel, factory shutdowns and other measures to contain the virus. The fall in oil demand could easily outstrip the loss of almost 1 million barrels a day during the 2008-09 recession, Bloomberg reported. Compounding problems is an ongoing price war launched by Saudi Arabia which has pledged to flood an already oversupplied market with cheap crude. Oil prices have fallen by more than 50% this year.

"In 2008-09 we had a demand shock, and inventories built. This [current crisis] looks likely to have a bigger impact, partly because there is a lot of uncertainty still around and partly because it is both a demand and supply story," Philip Jones-Lux, energy market analyst at JBC Energy, told DW. "The industry has been supposedly readying itself for a 'lower for longer' scenario, but the current market and outlook are beyond anything that could be reasonably prepared for and we are likely to see some real pain inflicted if prices remain in the $30-a-barrel range."

The housing market, which was propped up by cheap loans offered to households by banks, was the epicenter of the 2008-09 crisis. The bursting of housing bubbles in the US and in other countries such as the UK, Spain and Ireland brought major global banks, which did not have enough capital to withstand the shock, to their knees. The banks paid a price among other things for bundling subprime mortgages into complex, opaque derivatives to maximize profits. This time, the banks are in a much better position thanks to increased regulation.

"The 2008-09 crisis was far more severe because the global financial system was far more fragile. Banks were not as well-capitalized as they are today particularly in the United States," Sara Johnson, IHS Markit executive director, told DW. "While today there are concerns with rising nonfinancial corporate debt, I'd say the magnitude is not as severe as in 2008-09."

But banks, especially the European ones which have been struggling to boost profits at a time in an ultra-low interest rate environment, are nevertheless feeling the heat. They are bracing for further interest rate cuts and loan defaults. Experts are also flagging a possible sovereign debt default by Italy, which is in a state of lockdown to contain the spread of the virus. European banks are holding more than €446 billions ($497 billions) of sovereign and private Italian debt, according to Bloomberg.

The collapse of US lender Lehman Brothers in 2008 fueled the most painful global economic downturn since the Wall Street Crash of 1929. The sustained, severe recession saw global output contract by 1.8% in 2009 compared with an expansion of 4.3% in 2007. Millions of jobs were lost, hurting global consumer spending. While the current crisis could cost the global economy up to $2 trillion this year, according to UN estimates, it's still not expected to push the world into a contraction.

"Our view is that this is a much more temporary shock that is going to have less significant and longstanding negative impacts on the global economy than the global financial crisis," Ben May, director of global macro research at Oxford Economics, told DW. "It's not that as if you don't go out today because you're worried about catching the virus, the money that you didn't spend today will be saved forever, it's more likely to be spent in the future unless something dramatic changes...When you look at past episodes of virus outbreaks or natural disasters, you know typically discretionary spending returns at a later point."

The coronavirus shock could not have come at a worse time for global trade which has been reeling from trade tensions between the US and China, the world's biggest economies. But the current blow is still not a severe as the one dealt by the crisis 10 years back.

"The global financial crisis was kind of endogenous in the economic system meaning that there was a strong capital stock distortion in some countries and there was a problem of over-indebtedness. These two roots of a crisis are much harder to cure than the situation that we are facing today where we have an interruption of production structures, which in principle are fundamentally sound," Stefan Kooths, head of forecasting at the Kiel Institute for the World Economy, told DW.

"So, even if the coronavirus crisis leads to a deep meltdown in terms of production, the chances of getting out of this recession rather sooner than later are much better than in the global financial crisis."

Pictures of empty shelves being shared on social media have become a common sight across the world as the coronavirus pandemic spreads. Supermarkets will keep stocking the shelves, but customers must play their part. (17.03.2020)