US stock markets recorded their worst performance since Black Monday in 1987, while Germany's DAX index logged a historic drop. Global shares have tumbled due to uncertainty over the COVID-19 outbreak. 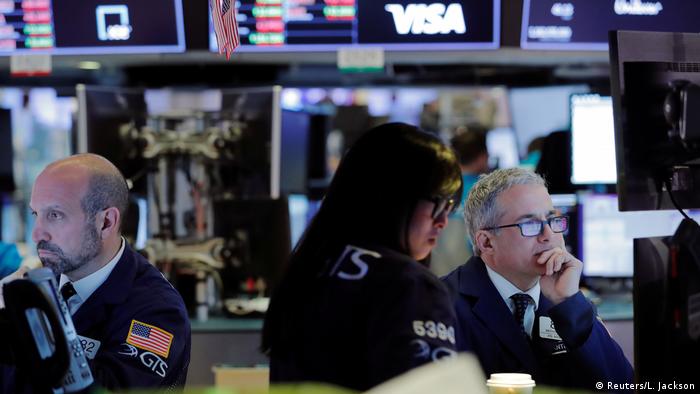 The Dow Jones Industrial Average, the stock market index of 30 top companies in the US, dropped by just over 2,997 points or nearly 13% on Monday. It was the worst one-day loss reported by the Dow since October 19, 1987, also known as Black Monday.

The S&P 500, the stock market index of 500 large US-headquartered companies, dipped to its lowest point since the end of 2018, sinking by almost 12%. This is also the steepest decline for the S&P since Black Monday.

The last half hour of trading saw a significant drop after US President Donald Trump announced that the US economy "may be" sliding into recession.

The US Securities and Exchange Commission (SEC), the securities regulator, said that US markets will remain open despite the significant fall and speculation that markets could stop trading.

To salvage the economic slowdown, the US Federal Reserve slashed interest rates to almost zero and pledged to purchase government debt worth billions of dollars. The Federal Reserve usually undertakes such measures during an economic crisis.

US halts trading with €2 trillion losses

Wall Street stocks quickly fell after opening on Monday, triggering an automatic halt in trading for 15 minutes. Losses continued after trading resumed, with the tech-rich Nasdaq Composite Index ending the day with a fall of 12.3%.

The price falls translate to more than €2 trillion in losses. Global markets also plunged as the sell-off continued.

The US market tumble particularly affected Australia, whose benchmark stock index fell by 9.7% by end of trading day. The Australian dollar also weakened against the US dollar.

Oil prices continued to fall, with Brent North Sea oil plunging more than 10% to a four-year low, owing to sliding demand and an ongoing price war between Russia and Saudi Arabia. Global oil prices are now below $30 a barrel - the lowest in four years.

Read more: Follow all the latest coronavirus developments in our rolling coverage

European shares plunged again on Monday due to coronavirus fears. The pan-European STOXX 600 fell 8.7% to its lowest level since 2013, and closed at 5.1% lower.

The latest fall means the index has lost more than a third of its value since a record high in February.

Germany's benchmark DAX was down 7.1% early on Monday. Just four weeks after its record high, the bluechip index was down 40% to a five-and-a-half-year low. Never before in its history did the German leading index fall so drastically so quickly.

The DAX recovered a little as the day wore on but failed to rally above 9,000 points before closing, ending the Monday at a low as the coronavirus pandemic continued to rattle the markets. At the end of trading, the DAX's 30 blue-chip companies had shed 5.31%, floundering on 8,742.25 points.

Germany has introduced unlimited credit for businesses. Central banks have lowered rates. The US Federal Reserve cut rates to nearly 0%, while Japan's central bank expanded its purchase of assets and announced interest-free loans to companies running short of cash.

"If you look at what’s happening with the markets, it’s really sentiment that is having an impact. This sentiment impact is because of two black swan events — the coronavirus and the fall in oil prices,"  Medha Samant, Investment Director at Fidelity Investment in Hong Kong, told DW. "Yes, central banks are providing some kind of cure to the markets, but it’s not really a cure."

The People's Bank of China said it would release 550 billion yuan (€70.3 billion, $78.5 billion) of liquidity into the market through lending requirement changes.

However, central banks are limited in how much they can do, due to already-low interest rates almost across the board.

For the first time in three decades industrial production in China contracted, falling 13.5% over January and February — a fall far further than expected. Retail also had its furthest fall in decades, with sales falling 20.5% as compared to a 4% predicted fall.

The US central bank has quarantined large numbers of dollars it repatriates from Asia. It will give them a wash before releasing them into the financial system because they are found to be contaminated with the virus. (13.03.2020)

US President Trump is attempting to entice a German lab to develop a vaccine exclusively for the US, a German newspaper reported. The company, however, later rejected claims of a sale of the firm or its technology. (15.03.2020)