For the first time, ceremonies marking the end of the Second World War are held online due to the COVID-19 pandemic. DW is contributing to the 75th anniversary by building a musical bridge between Russia and Germany. 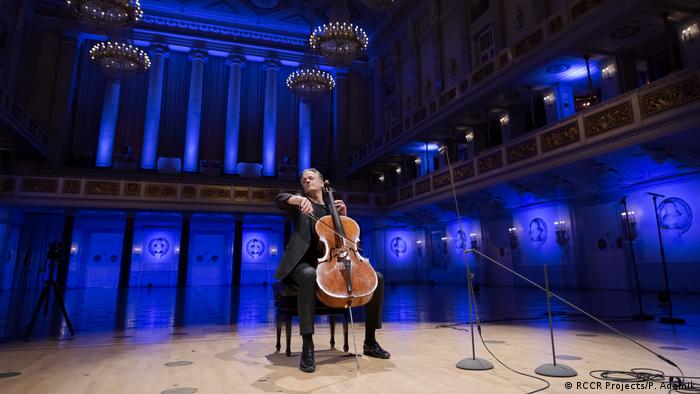 May 8, 2020 is a special date: On this day, the entire world is commemorating the Nazis' unconditional surrender 75 years ago. But for Germany and Russia, it possesses particular importance. The date stands for a new beginning in the history of Germany and Europe, leading to a new reconciliation between peoples.

Major celebrations and concerts in Russia and Germany were to commemorate the end of the Second World War, but the coronavirus pandemic overturned all plans.

Among the planned events was a symphonic concert with the participation of young musicians from the Russian-German Music Academy and international soloists, to be performed in Berlin, Moscow and Saint Petersburg. The institution has been bringing young artists from Russia and Germany together in symphonic orchestras and chamber music ensembles for many years.

But this series of concerts also had to be canceled. Nevertheless, with the support of DW and other partners, the artists and organizers found a way to honor the anniversary, by producing a video version of the concert.

The concert was filmed in the three cities, with strong precautiony measures and without an audience — knowing that it would nevertheless reach an even broader international audience through Deutsche Welle, thereby creating a musical bridge between the two countries.

The program will run on May 8, 2020 on DW TV's German and English channels, in English under the title "May 8, 2020: Building A Bridge of Harmony Between Russia and Germany." The concert will also be available online on the YouTube channel DW Classical Music, as well as on our website, dw.com/culture.

Russia's TV Kultura will also be airing the concert and it will be livestreamed on the platforms of the Moscow Philharmonic Orchestra and the Mariinsky Theater.

Great support in both countries

The project received broad support — both from the artists and the Russian and German governments, under the patronage of the Foreign Ministers of Russia and Germany, Sergei Lavrov and Heiko Maas.

Both politicians contribute to the program with a greeting:

"We commemorate today the memory of the millions of victims of Germany's actions during the
Second World War. To be holding a common concert today is a sign of remarkable reconciliation between our peoples after World War II," says Heiko Maas. 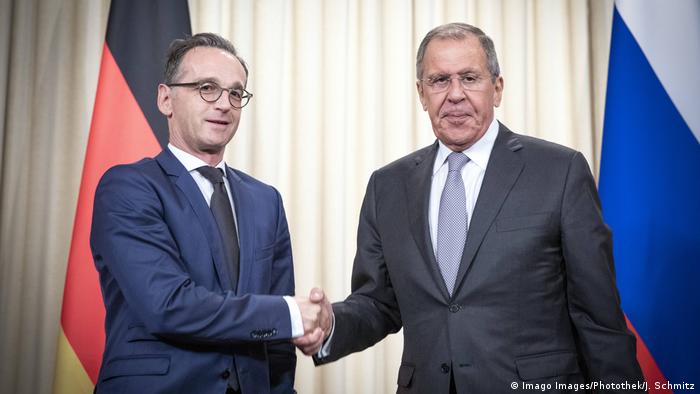 Handshakes in real life are a thing of the past: Heiko Maas and Sergej Lawrow in Moskow in August 2019

His Russian counterpart Lavrov emphasizes how the project contributes "to remembering together the victory over National Socialism in these difficult times, when people are forced to be separated due to the coronavirus pandemic."

"We are very pleased to be producing new, high-quality concerts to mark this important occasion in times when cultural life is severely restricted worldwide," says Rolf Rische, DW's Head of Culture about the "Musical Bridge" project.

Together in difficult times

"When it became clear that the large symphonic program that we had planned with the participation of young musicians from the academy would not be possible, we immediately knew that we could not simply drop the project on such an important date. We just had to find a new format that still brought everyone together, if only in a virtual setting," explains project manager Nikolaus Rexrodt. "The fact that this huge project was implemented in such an incredibly short time is only thanks to the active support of the artists, the numerous partners in Germany and Russia, and the politicians." Artistic personalities such as conductors Daniel Barenboim and Valeri Gergiev also actively supported the project. "In these times, when millions of people live in very unusual circumstances and are suddenly exposed to the unexpected danger of the coronavirus, we hope that music brings hope and joy to every home," says the Russian conductor and head of the Mariinski Theater, Valeri Gergiev. "We are all equal in front of this virus, and my hope is that we will find a way to be inspired by this equality and make a better world," adds Daniel Barenboim. 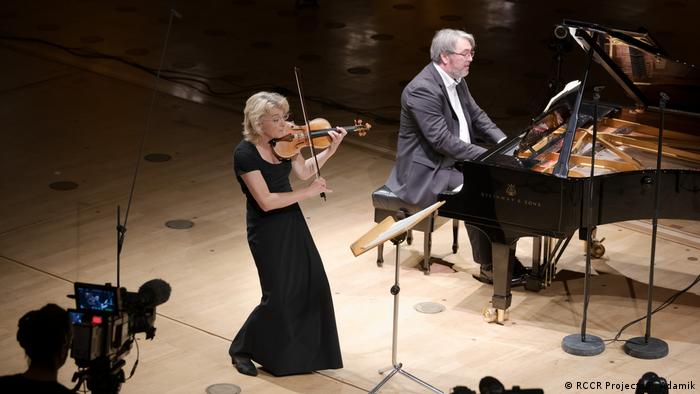 Concert under quarantine: Antje Weithaas and Thomas Hoppe performing for the production in Berlin

The musical focus of the concert is in Berlin, but the contributions from Moscow and Petersburg have a strong symbolic value as well: "In view of the particularly difficult current situation in Russia, it is almost a miracle that we received this material," says project manager Rexroth.

The program includes works by Russian and German composers: Pyotr Tchaikovsky, Dmitri Shostakovich, Igor Stravinsky, Johann Sebastian Bach, Ludwig van Beethoven and Wolfgang Amadeus Mozart. It also features works referring to past crises in the world, such as "Quatuor pour la fin du temps" by Olivier Messiaen. The great French composer created it during his detention in a prisoner of war camp during World War II.

Renowned young artists from both countries, including pianists Martin Helmchen and Denis Matsuev and violinist Antje Weithaas, are taking part in the concert, as well as promising musicians who have participated in projects of the Russian-German Music Academy.

The unconditional surrender of the German Wehrmacht came into effect on May 8, 1945 at 11 p.m. Western European Time. 75 years later, Europe is again being put to the test, writes the author György Dalos. (06.05.2020)

A month ago, amid the coronavirus lockdown, the Berlin flutist Bianca Hase started giving a daily "window concert." Her initiative has now grown into an ad hoc street orchestra that plays every evening. (20.04.2020)