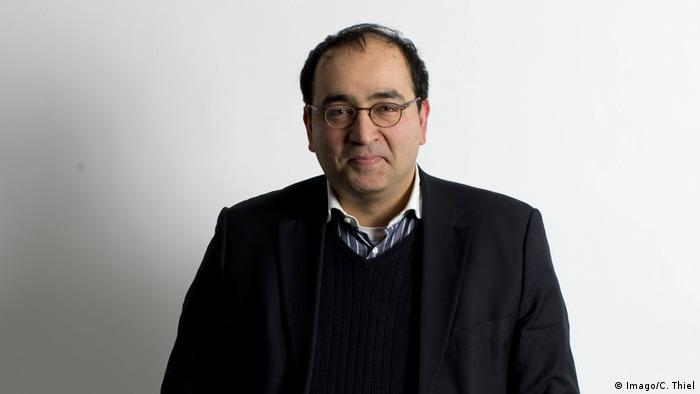 Not only a member of the Bundestag for the opposition Green Party, Nouripour is also vice-chair of the German-US parliamentary friendship group, a board member of the Atlantik-Brücke and German Atlantic Association, all of which work to strengthen ties between the United States and Germany.

He is among more than 100,000 dual German nationals targeted under what Trump has described as "extreme vetting" of people from the seven countries on the list.  The reason: Nouripour was born in Iran in 1975, came to Germany with his parents when he was 13 years old and acquired German citizenship in 2002.

The blanket ban on people from a certain country entering the United States is "ridiculous," Nouripour said. "This is not about security, it about dirty symbolism which is poisoning our societies," said the lawmaker who has visited more than 40 US states.

Even if he or his seven-year-old German-born son tried to give up their Iranian citizenship it wouldn't be allowed. That's because Iran does not allow its nationals to revoke citizenship and considers foreign-born children of an Iranian male to be citizens - even if they have never visited the country.

The sweeping executive order issued by Trump on Friday suspends refugee arrivals for six months and bars visas for travelers from Iran, Iraq, Libya, Somalia, Sudan, Syria and Yemen for the next three months. It also hits dual foreign nationals, even if they come from one of the 38 countries, including Germany, whose citizens don't require a visa to enter the United States for 90 days.

The immigration order has prompted confusion and chaos. It is unclear how Nouripour will be impacted, but the German foreign ministry has said dual nationals from the seven countries would be affected. He holds a diplomatic passport which can facilitate travel, but does not have diplomatic immunity.

Turning away those that love America

"We only want to admit those into our country who will support our country and love deeply our people," Trump said on Friday as he signed the orders.

Trump has said the order is "not a Muslim ban," despite his campaign promise to ban Muslims from entering the United States. The order also prioritizes refugee applications from persecuted minority religions.

Nouripour said that as they stand, and despite Trump's claim that the immigration restrictions are not a Muslim ban, they could easily head in that direction. The most important thing to do now is to support those standing up against Trump's actions through nationwide protests in the United States, he said.

"I'm very happy and proud of all those people at the airport protesting and the voluntary lawyers who have achieved a lot," he said. "These are the best reasons to say that no matter what the administration will do, I will always love the United States."

Trump's order faced its first legal battle on Saturday after a federal judge partially blocked authorities from deporting refugees and some other travelers who were detained at US borders. It is the beginning of what could be a number of challenges that may eventually reach the Supreme Court.

German Chancellor Angela Merkel's spokesperson, Steffen Seibert, said Sunday that Trump's travel ban was wrong and the government would review the consequences for dual national German citizens. The government would "represent their interests, if needed, vis-a-vis our US partners," he said.

Seibert also said that the "battle against terrorism does not justify putting people of a specific background or faith under general suspicion."

Nouripour warned that Trump's immigration policies would provide a false sense of security and only strengthen extremists.

"The goal might be to fight terrorism, but the effect is to strengthen jihadis," Nouripour said. "The core message of the jihadis to young Muslims across the globe is that Western societies do not want you, which is underlined in a very bad way by this ban," he said.

Trump has come under fire from critics over the seven countries listed on the immigration ban. The US has labelled Iran a state sponsor of terrorism, but this is related to Tehran's support for groups like Hamas and Hezbollah in the Middle East.

In the other six war torn countries under the ban, Muslim civilians are the ones who most often fall victim to Islamic extremism. And as noted by the CATO Institute, a US-based think tank, between 1975 and the end of 2015, no Americans have been killed in terrorist attacks on US soil by any foreigner from the seven countries under Trump's ban.

Meanwhile, Saudi Arabia, the Gulf Arab States, Lebanon, Egypt and Tunisia are not covered by the ban. The September 11 highjackers were from the UAE, Saudi Arabia, Lebanon and Egypt. Further, Tunisia has the highest per capita number of foreign jihadists who joined the "Islamic State."

Noting that none of these countries are impacted by Trump's order, Nouripour suggests "the reasons for this appear to be that there are business ties between Trump Inc. and those countries."