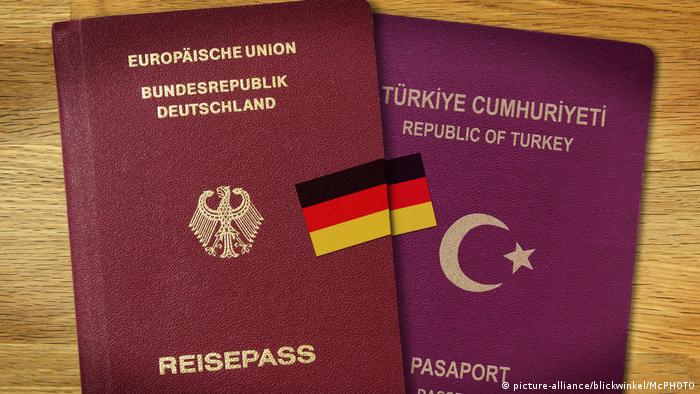 An increasing number of naturalized Germans are not required to renounce their original citizenship before receiving a German passport. The rise has been driven by internal EU migration and an uptick in refugee numbers, according to the Federal Statistics Office.

At the turn of the millennium, the share of naturalized Germans with dual citizenship was just under 45 percent. It then grew slightly with fluctuations before a continual increase since 2013.

Another exception is made for refugees, who represent a growing share of dual nationals.

For Iraq, another main source of refugees, of the 3,480 nationalized as German in 2017 around 88 percent kept their Iraqi passport.

One reason for the rising rate of dual nationals is that a number of countries where refugees come from do not allow or make it extremely difficult to give up citizenship.

That is the case with countries such as Afghanistan, Syria, Lebanon, Eritrea, Iran, Nigeria, Morocco, Algeria and Tunisia.

Researchers at the European Migration Network, an advisory board to European Commission, estimated that the number of dual nationals will rise significantly in the future following the arrival in Germany of 1.5 million migrants fleeing conflict and poverty in recent years. The increase, however, will not be immediate as there is a six-to-eight-year residency requirement to apply for citizenship.

In addition, the share of dual nationals is also likely to rise in the future through the birth in Germany of children from non-naturalized people seeking protection. A number of countries, including Syria and Iran, consider children born to a male national to also be a citizen, even if they were born outside the country.

Since 2000, the children of two foreign parents can get German nationality as well as that of their parents if at least one parent has legally lived in Germany for eight years.

For many years, the children of such residents in Germany had to decide on their nationality when they turned 23. The government struck down this requirement in 2014.

In all, out of the 73 million Germans living in Germany around 4.3 million people hold at least one other citizenship.

Even though German-Turks are often the focus of the dual-nationality discussion, they are the third largest group of dual citizens with 530,000 holding two passports.

Nationalized Germans with Polish citizenship stand at around 690,000, while there are approximately 570,000 dual German-Russian citizens.

Ranking the most powerful passports

The Global Passport Power Rank 2017, which compares passports from the 193 UN member countries, states that a German passport will help you travel the furthest, - into 159 countries around the world. (25.04.2017)

More children are enrolled in German schools today as a result of higher birth rates and immigration. Still, a stark divide exists between those who are likely to attain a higher education and those who are not. (22.06.2018)

Former German President Joachim Gauck has called on migrants living in Germany not to form parallel societies. He also warned against a misuse of the term "Heimat." (07.06.2018)

Undocumented African migration to Germany: What can and should be done

Refugee family reunification in Germany has proven a major source of division in Angela Merkel's governing coalition. DW explains how the process works and what the main points of contention are. (29.12.2017)

The number of Britons seeking German citizenship nearly quadrupled last year. The number is expected to rise as Brexit nears. (13.06.2017)

Faced with a huge labor shortage, Germany is launching its version of a green card in an attempt to boost immigration. But is it the game-changer the government is hoping for?