Record rise in babies with foreign mothers in Germany | Germany| News and in-depth reporting from Berlin and beyond | DW | 04.10.2016

Record rise in babies with foreign mothers in Germany

One in five babies born in Germany in 2015 has a mother holding citizenship of another country. Hospitals face bureaucratic hurdles when they treat foreign patients. 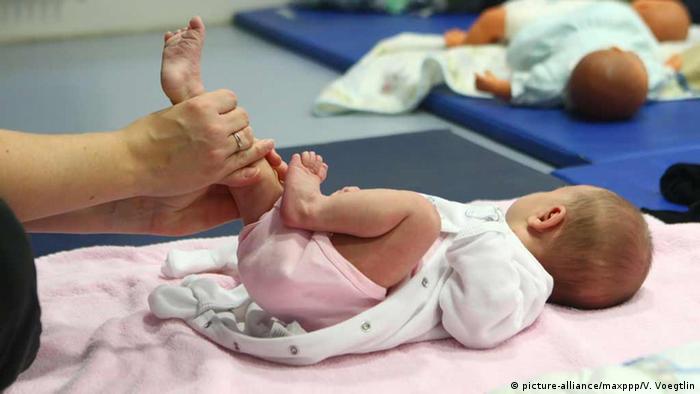 Mahmoud was born in the obstetrics department at Charite in Berlin, one of the biggest university hospitals in Europe. "Everything went well," his father said, holding the infant a few hours after his birth. "We're happy. We met very nice people here." Mahmoud's mother was still recovering from her C-section. The family came to Germany from Syria one year ago. Mahmoud will live in Berlin - at least for the foreseeable future.

The birthing room at Charite is filled with busy doctors and midwives, breastfeeding mothers, newborn babies uttering their first cries. Many of these mothers came from abroad.

According to the Federal Statistical Office (Destatis), one in five children born in Germany in 2015 had a mother holding citizenship of another country - a 20 percent rise caused by the arrival of refugees and immigrants from Eastern Europe.

The hospital treats all patients equally, Dr. Wolfgang Henrich, Director of Obstetrics at Charite, told DW. Unfortunately, their nationality can present both logistical and financial challenges. "Of course we have seen an increase in the number of pregnant refugee women," Henrich said. "We are mostly facing problems caused by the language barrier. We have to make sure that interpreters can be booked or find someone in the hospital who can do the job. Besides, we've been trying to employ health care assistants who speak foreign languages."

With more than 5,000 births per year, Charite has already hired at least one Syrian physician at each of its four locations in Berlin. "Interpreter costs amounted to several hundred thousands of euros this year, because of foreign women who simply showed up," Henrich said. "I'm not only talking about Syrian women, but also about those from Iraq, Iran, Afghanistan or different African countries. In such cases, we need to provide interpreters on short notice. Financing these services is an unsolved problem."

From the bureaucratic point of view, it is easier for EU citizens to enroll in the German health care system than it is for people from outside the bloc. Adriana has been living in Leipzig since 2012, where her husband was offered a job as a cook in a restaurant. The Romanian couple has a two-year-old son. "I was very nervous when my husband took me to the hospital, but it all went very well," Adriana recalled. "Yes, there was a woman in the hospital, I think she was a doctor, who helped with translating, but I also spoke some German at that time. It's a good thing we both have health insurance."

'Patients with medical emergencies will never be turned down'

Dr. Volker Müller, a laboratory physician in Kassel, told DW that hospitals are confronted with financial dilemmas when treating refugees and non-EU immigrants. "Besides paying for interpreter services, there are also bureaucratic hurdles related to who covers the treatment costs," Müller said.

Statutory health insurance is mandatory in Germany for all expats. The EU introduced a common European Health Insurance Card valid for the treatment of acute health problems during short stays in other member states. For a long-term stay in Germany, EU citizens must enroll in a German public or private health insurance.

Refugees' medical emergencies and births, like Mahmoud's at Charite hospital in Berlin, are covered by local authorities during their first 15 months in Germany. If the asylum request is still being processed after 15 months, refugees are entitled to the same statutory healthcare as German citizens. "Whatever the case, patients with medical emergencies - and deliveries are considered emergencies - will never be turned down," Müller concluded.

Once you've made it to Germany, you can see a doctor - initially only for emergencies, though. Later, health insurance will cover the basics. Learn more about the German health care system here. (21.09.2015)

The number of refugees coming to Germany is rising. DW has put together information on how to apply for asylum, find accommodation, work, and health care, learn the language, and understand the way Germans tick. (25.09.2015)