US President Donald Trump has said he will cut foreign aid to Honduras, El Salvador and Guatemala, as a caravan of migrants makes its way toward the US-Mexico border. He branded the situation a "national emergency." 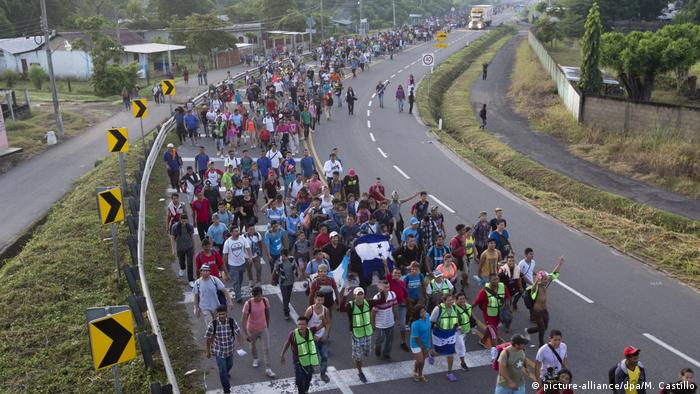 Trump tweeted on Monday that the US would start to substantially reduce or completely cut aid to three Central American states for being "not able to do the job of stopping people from leaving their country."

In a flurry of tweets, he repeated complaints blaming Democrats for lax immigration laws. Trump — who alleged there were "unknown Middle Easterners among the convoy — also said he had alerted the military and the US Border Patrol of an impending national emergency.

His words followed a series of threats, including one to shut the US Mexico border entirely, as a caravan of migrants from Honduras, El Salvador and Guatemala made their way north through Mexico.

The three countries together received $500 million from the US during the 2017 fiscal year, although the sums had already been predicted to fall.

A Honduran-born leader of the migrant caravan rejected Trump's assertion that there were people from the Middle East in the group. He said all those there were from Central America.

After taking office, Trump imposed a travel ban on people from several Muslim-majority nations, saying it was necessary to stop terrorists from entering the country.

Read more:Hondurans fleeing: 'There is no other option'

The president devoted one tweet to an explicit attempt to connect the caravan and the midterm election campaign, urging people to "think of and blame the Democrats" if they see a caravan or an attempt at illegal immigration.

Trump had also highlighted the caravan issue while on the mid-term campaign trail last week. As many as 5,000 migrants were reported to have massed in the Mexican city of Tapachula by Sunday evening, some 3,800 kilometers (2,400 miles) from the US border. A smaller group was reported to be not far behind.

Members of the caravan have vowed to press on, despite Trump's threat to close the border to them.

Migrants are fleeing widespread gang violence and poverty in the Central American states they hail from.

Mexican authorities have called on them to formally register their presence in the country so that they can be processed for asylum. Those who do not qualify would be liable to being sent back to their home countries.

One protester has been shot dead and several people arrested during the latest confrontation with authorities. Honduras has been rocked by violence since President Juan Orlando Hernandez was re-elected in November. (21.01.2018)