The former US president has made his first major public appearance after leaving office. Trump has teased his supporters that he may "beat" Biden in 2024. 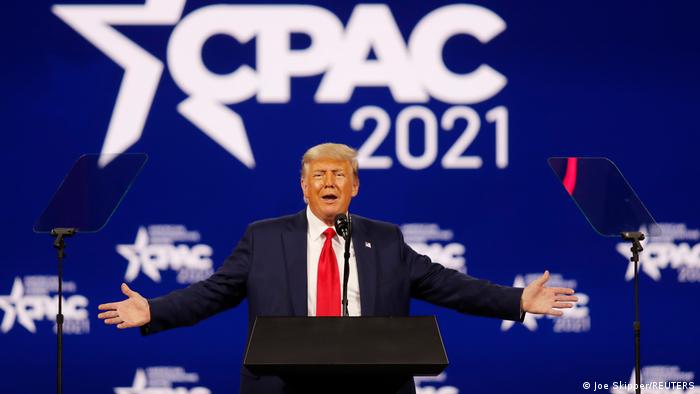 Donald Trump took to the stage on Sunday evening at the Conservative Political Action Conference being held in Orlando amid questions over the former president's political future.

The 74-year-old left the White House on January 20 just before the inauguration of President Joe Biden. He survived an impeachment hearing in the Senate after the House of Representatives voted to hold him accountable for the violent attempt to storm the Congress building on January 6. Trump repeatedly rejected the validity of the election that he lost.

The Republican party has been grappling with the legacy of Trump. The party base is for the most part fiercely loyal to the former television celebrity, but some have questioned his chances of winning an election should he stand again in 2024.

Trump began his speech by telling the audience that, despite rumors, he was not planning on starting a new party. He said it was not necessary since he already had the Republican party. However, he spent more time painting Joe Biden's administration and the Democratic party as being a massive failure only weeks after it took power.

"I may even decide to beat them for a third time," he then told his cheering fans, hinting that he might indeed run for a second term in 2024. The "third" time was a reference to his first election win in 2016 and the false claim that he won in 2020.

DW's Washington bureau chief Ines Pohl was in Orlando for the conference. She called Trump's announcement "bad news for the Republicans," who may have hoped he would choose to remove himself from the party and solve their internal conflicts.

Trump continued to hit all his standard talking points, railing against the Democrats, giving himself credit for grand successes from his time in office and repeating the false claim that he won the election last year. The crowd, with masks far and few between, welcomed his every word.

His criticisms were not limited to the Democrats. The former president also attacked several members of the Republican party in Congress. He read out a list of lawmakers, including those who voted to impeach him in the Senate, and called for them to be voted out.

He went on to announce that he would carry on working to get Republicans elected who stand with his wing of the party. He told the crowd that the Republican party will take over Congress in 2022 and then teased the audience one last time, saying that "a Republican president will make a triumphant return to the White House and I wonder who that will be?"

Ines Pohl tweeted a couple of hours before his planned speech — which ended up being delayed — that the event was unusually empty this year. "Regular visitors tell me they have never seen this event so empty," she said.

Carolina Chimoy, DW US correspondent, also pointed out on Twitter that the an eye-catching golden statue of the former president, which had grabbed headlines in recent days, had been made in Mexico.