Donald Trump cleared by US Senate of inciting Capitol riots

US senators have acquitted the former US president on a charge of inciting an insurrection by his supporters at the Capitol building. After the verdict, Trump said his movement "has only just begun." 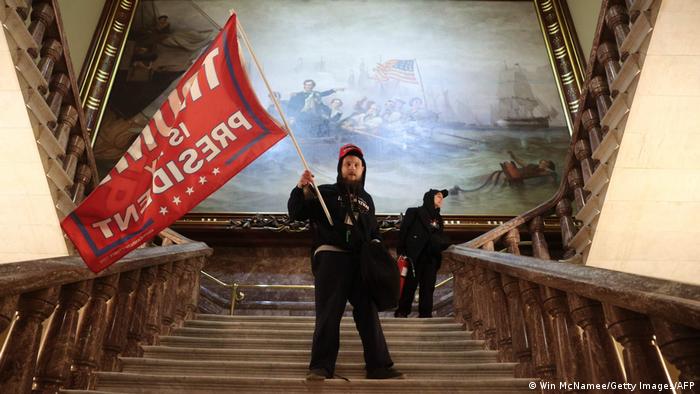 The United States Senate on Saturday formally cleared former President Donald Trump of inciting an insurrection at the US Capitol last month.

Trump was the first former president to face trial after leaving office and the only president to be impeached twice.

The US Senate voted 57-43 on the impeachment charge, which means that seven Republican senators voted to convict the former president.

A conviction in Trump's unprecedented second impeachment trial was seen as highly unlikely as it required a two-thirds majority, and the 100-member Senate is evenly split between Democrats and Republicans.

"Picture is really clear that former-President Donald Trump has a grip on the Republican Party," she said. "Donald Trump is far from being done."

What did Trump say after the vote?

"This has been yet another phase of the greatest witch hunt in the history of our country," Trump said in a statement.

"In the months ahead I have much to share with you, and I look forward to continuing our incredible journey together," he added.

He signaled towards a possible political future, saying that "our historic, patriotic and beautiful movement to Make America Great Again has only just begun."

"We have so much work ahead of us, and soon we will emerge with a vision for a bright, radiant, and limitless American future," Trump said.

The ex-president was accused of inciting the deadly insurrection when he called on a crowd of supporters to march on Congress, which was in the process of certifying Joe Biden's victory.

Speaking after the verdict, President Biden said, "This sad chapter in our history has reminded us that democracy is fragile."

"While the final vote did not lead to a conviction, the substance of the charge is not in dispute," Biden added.

He also said violence and extremism have no place in America.

Democrats had hoped to sway a minimum of 17 GOP senators to reach the two-thirds majority required to convict Trump in January's Capitol riots.

But the Senate's top Republican, Mitch McConnell, said Saturday he would vote against convicting the former president.

McConnell said he could not vote to convict Trump because he is "constitutionally not eligible for conviction" after leaving office. In a speech after the vote, McConnell called Trump "practically and morally responsible for provoking" the riot.

Even though Trump was acquitted, the end of the trial saw the largest number of senators ever to vote to convict a president of their own party.

Richard Burr of North Carolina, Bill Cassidy of Louisiana, Susan Collins of Maine, Lisa Murkowski of Alaska, Mitt Romney of Utah, Ben Sasse of Nebraska and Patrick Toomey of Pennsylvania were the seven Republicans who joined all the Democratic Party senators in voting to convict Trump.

"The vast majority of the Senate Republican caucus, including the Republican leader, voted to acquit former President Trump, signing their names in the columns of history alongside his name forever," Schumer said.

Trump called on supporters to rally in Washington on January 6, the day Congress would certify his Electoral College defeat to Joe Biden. In a provocative speech near the White House, Trump urged them to march on the Capitol. His backers fought police and entered the building, forcing lawmakers to flee and temporarily disrupting the vote count. Five people died in the insurrection. Bloody images from that day's events were at the core of Democrats' impeachment case against Trump.