The proceedings in Donald Trump's impeachment trial were briefly halted after a House Republican offered new details of a phone call between the former US president and the House minority leader about the Capitol riots.

US senators had been close to concluding the trial , when proceedings were briefly halted as Democrats, along with five Republicans, initially won a vote to call witnesses.

The trial rules say that if senators agree to hear witnesses, votes to hear additional testimony would be allowed.

Hours later, senators agreed to accept new information from a Republican congresswoman about Trump's actions on the day of the deadly Capitol siege on January 6 and proceed from there without calling witnesses.

The ex-president stands accused of inciting the deadly insurrection when he called on a crowd of supporters to march on Congress, which was in the process of certifying Joe Biden's victory.

Jaime Herrera Beutler of Washington state, who was one of 10 conservatives to vote in favor of impeaching Trump, offered new details about a phone call between then-President Trump and Republican House Minority Leader Kevin McCarthy.

Democrats said the call was proof that Trump was indifferent to the violence. Democrats then voted to hear from Beutler before proceeding.

Beutler recollected that when McCarthy called Trump during the riot, asked him to call off his supporters, the former Republican president blamed left-wing anarchists.

"When McCarthy finally reached the president on January 6 and asked him to publicly and forcefully call off the riot, the president initially repeated the falsehood that it was Antifa that had breached the Capitol," Beutler said in a statement.

"McCarthy refuted that and told the president that these were Trump supporters," the congresswoman said.

"That's when, according to McCarthy, the president said: 'Well, Kevin, I guess these people are more upset about the election than you are,'" she said.

Democrats hope the call could sway more Republicans to vote against Trump in the impeachment trial. 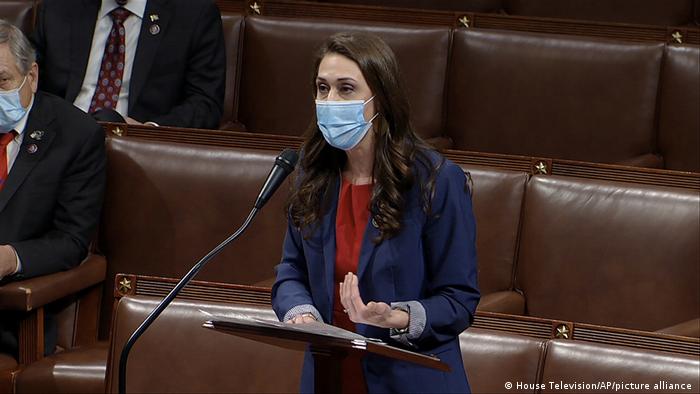 The ball is in the court of the Republicans as a minimum of 17 GOP senators would have to join all the Democrats to reach the two-thirds majority required to find Trump guilty of "incitement of insurrection."

While the Republican vote seems like an unlikely scenario, Democrats hope they can win over enough Republican senators to convict Trump for his role in January's Capitol riots.

Republican Senators Lisa Murkowski of Alaska, Ben Sasse of Nebraska, Mitt Romney of Utah, and Susan Collins of Maine are some of the names the Democrats could seek to persuade.

These four are frequent critics of Trump and have said in the past that he incited the insurrection. They have also joined with Democrats twice to vote against the Republican efforts to dismiss the impeachment trial.

But in what appears to be a shock for the Democrats, Senate's top Republican Mitch McConnell said Saturday he will vote against convicting the former president.

While describing the vote on whether to convict as a "close call," McConnell told colleagues in a letter that "I am persuaded that impeachments are a tool primarily of removal and we, therefore, lack jurisdiction."

"I will vote to acquit," McConnell added, leaving it highly likely that the Senate will fail to reach the two-thirds majority necessary to convict Trump.

Louisiana Senator Bill Cassidy could also turn the tables. Cassidy voted in favor of the GOP effort to dismiss the trial two weeks ago. However, he switched his vote this week, saying Trump's lawyers had done a "terrible'' job making the case that the trial was unconstitutional.

Cassidy was seen taking considerable notes throughout Friday's trial. He said that the impeachment managers had raised some "intriguing questions" and hoped that Trump's defense counsels would answer them thoroughly.

He added that he was "trying to approach it [the impeachment] objectively.''

Trump's lawyers took only three hours to conclude their Friday presentation, where they called the impeachment unconstitutional and an "act of political vengeance."

They argued that Trump's rally speech on January 6,  where he told supporters to "fight," was rhetorical.

The former president's lawyers showed multiple video clips where prominent Democrats, including President Joe Biden and Vice-President Kamala Harris, could be seen using the word "fight" in their past speeches.

Trump's defense team also said that the trial was an attempt to remove the former president from the political arena.

"Let us be clear: this trial is about far more than President Trump," defense lawyer Bruce Castor said.

"It is about canceling 75 million Trump voters, and criminalizing political viewpoints. That is what this trial is really about."

If Trump is convicted, the Senate could take a second vote to ban him from a future re-election bid.