Despite voting to acquit, Mitch McConnell said Donald Trump was "morally responsible for provoking" the deadly attack. Some of the Republicans who did vote to convict the former president explained their decisions. 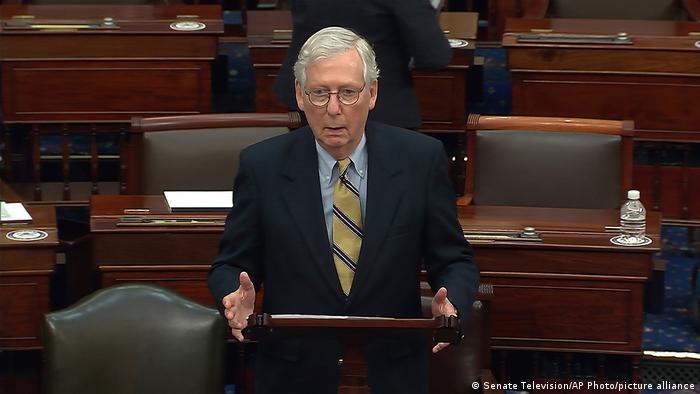 Mitch McConnell has received criticism for his stance

Republican Senate Minority Leader Mitch McConnell said Saturday there is "no question" that former US President Donald Trump was "practically and morally responsible for provoking" last month's deadly attack on the US Capitol.

Nevertheless, in the vote over whether to convict Trump, McConnell said he could not cast his ballot to condemn the former president because he is "constitutionally not eligible for conviction" due to no longer being in office.

While still the leader of the Senate, McConnell did not act on a request to have the chamber called into session so Trump could be tried while still president.

"These criminals were carrying his banners. Hanging his flags. And screaming their loyalty to him," McConnell went on.

He called Trump's antics leading up to the siege "a disgraceful dereliction of duty."

In total 57 senators voted to convict Trump, with 43 opting to acquit, falling short of the two-thirds majority needed to find him guilty.

Republicans who recognize Trump is 'guilty'

While most Republican senators backed Trump, seven broke ranks and voted to convict the former president. One of those was Republican Bill Cassidy, who tweeted a video saying: "Our Constitution and our country is more important than any one person. I voted to convict President Trump because he is guilty."

Another who didn't vote with his party was Mitt Romney, who has been a vocal critic of Trump and was the only Republican senator to vote for conviction during the former president's first impeachment trial last year.
He released a statement saying: "After careful consideration of the respective counsels' arguments, I have concluded that President Trump is guilty."

"President Trump incited the insurrection by using the power of his office to summon his supporters, urging them to march on the Capitol during the counting of electoral votes," Romney said. "He did this despite the obvious and well known threats of violence that day."

"President Trump also violated his oath of office by failing to protect the Capitol, the Vice President, and others in the Capitol. Each and every one of these conclusions compels me to support conviction," Romney said.

Republican Pat Toomey also voted to convict. He posted a series of tweets, saying: "President Trump’s conduct in response to losing the 2020 election began with dishonest, systematic attempts to convince supporters that he had won."

"He applied intense pressure on state and local officials to reverse the election outcomes."

"When these efforts failed, President Trump summoned thousands to Washington, and inflamed their passions."

"He urged the mob to march on the Capitol for the explicit purpose of preventing Congress and the Vice President from formally certifying the results of the presidential election. All of this to hold on to power despite having legitimately lost."

Toomey concluded his tweets by saying: "His betrayal of the Constitution and his oath of office required conviction."

The Republican party in the US is facing a choice in the run-up to the impeachment trial of former US President Donald Trump: either stick with Trump or return to traditional conservative politics, according to former White House ethics lawyer, Richard Painter, in conversation with DW's Brent Goff.

Former President Donald Trump has slammed Republican Senate Minority Leader Mitch McConnell after he said Trump is responsible for US Capitol breach. Republicans are divided over Trump's future in their party.