Donald Trump lashes out at Iran in all-caps tweet

In an escalating war of words, Trump told Iran's President Rouhani on Twitter to "NEVER EVER" threaten the US. The Iranian foreign minister shot back with a tweet telling the Trump to "BE CAUTIOUS!" 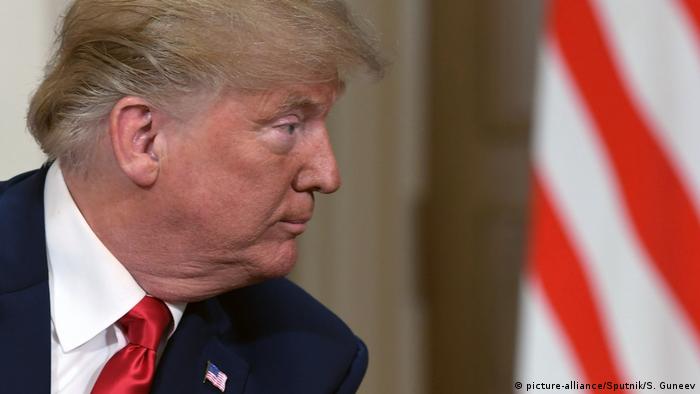 Responding to Iranian President Hassan Rouhani's remarks about peace and war with the US, President Donald Trump resorted to an all-caps tweet on Monday to warn Rouhani against threatening the United States.

Trump, who has a history of firing off escalating tweets targeting the leaders of countries at odds with the US, told Rouhani to "NEVER EVER THREATEN THE UNITED STATES AGAIN."

The US president then issued his own threat, saying Iran "WILL SUFFER CONSEQUENCES THE LIKE OF WHICH FEW THROUGHOUT HISTORY HAVE EVER SUFFERED BEFORE."

Earlier on Sunday, Rouhani had warned the US that Iran could shut down international oil shipments through the Strait of Hormuz if Washington continued to provoke and threaten Tehran.

In an address to the Iranian diaspora in California on Sunday, US Secretary of State Mike Pompeo criticized Iran saying its leaders were a "mafia" and accusing several of them of corruption. He also promised US support for Iranians who are unhappy with their government.

A few hours after Trump leveled his threatening tweet in all-caps, Iran's Foreign Minister Mohammad Javad Zarif dissmissed the US president's threat by advising caution, also in all-caps. In the tweet, Zarif stressed Iran's longevity, in comparison to the US, to emphasize his country's resiliency, and added that Iran had received even harsher criticism "albeit more civilized ones" in the past.

"COLOR US UNIMPRESSED... We've been around for millennia & seen fall of empires, incl our own, which lasted more than the life of some countries. BE CAUTIOUS!"

Members of Trump's administration have ramped up their rhetoric against Iran in an effort intended to foment unrest and put pressure on Iran to end its nuclear program, US officials told Reuters news agency.

In May, Trump withdrew the US from the 2015 Iran nuclear deal and said Washington would move to fully restore economic sanctions against Tehran in November.

The international deal saw six countries — the US, the UK, France, Germany, Russia and China — agree to lift sanctions against Iran in exchange for limitations on Iran's nuclear program.

Although European and Iranian leaders have been scrambling to save the deal, many companies and banks have stopped doing business in Iran amid fears they could be targeted by US sanctions.