Germany has one of the lowest school-integration rates for handicapped children in all of Europe. Critics say it is high time to make a change, but they face an uphill battle. 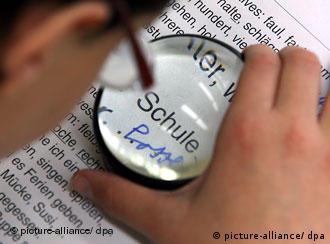 Can special equipment be brought into regular schools?

Elke Krämer's son Joel was a bit slow in his physical development. Born premature, he was smaller than other children, and he took longer to learn how to walk, swim, and tie his shoes.

His kindergarten teachers recommend a special elementary school for the physically disabled. There, Krämer was told, he would get extra physical therapy that would help him catch up to his friends and allow him to switch to a regular school.

Now, Joel is 11, and he is still in his handicapped school -- where the education level lags further and further behind the regular school. His mother is desperate; she has little hope he can ever change into a normal middle- or high-school.

"I was told he should go to this school for a few years of elementary school, then 'get fit' for the regular school later on," the 43-year-old Krämer said. "Now I notice that very few children manage to do that, ever … After a while they don't believe they belong anywhere else." 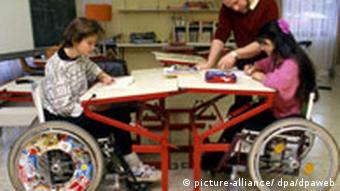 Krämer worries about her son's future; without a high-school diploma "he can't even get a job-training position," she said.

"Sometimes I think I'm raising a welfare recipient," she added.

The mainstreaming movement that rushed through the US and many other western education systems in the 1970s appears to have skipped Germany altogether. According to the European Agency for Special Needs Education data, just 13 percent of German special-needs children are educated in regular public schools, compared with an average in western Europe of around 79 percent.

Germany near the bottom

While it is hard to compare international statistics -- each country defines handicapped and "special needs" differently -- the gap between Germany and the rest of Europe is very real, said Sybille Hausmann, head of the Frankfurt-based inclusive-education lobbying group Gemeinsam Leben, Gemeinsam Lernen ("Living Together, Learning Together").

Speaking at the first Germany-wide conference aimed at addressing issues around integrated schooling, Eine Schule für Alle ("A School for Everyone"), which was held in Cologne in mid-November, Hausmann attributed Germany's extreme situation to historical factors.

More important is that the German school system "is a very segregating system, for all children," Hausmann pointed out. 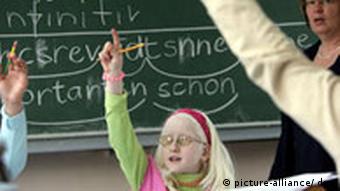 This school for the visually impaired has light-sensitive students

After the fourth grade in most states, children are divided based on ability into three major types of schools that deliver different degree certificates.

"In our system, you have to achieve a certain level. If you fail, you are segregated in some way. You have to repeat the class, or go to another school -- or go to a special school," she explained.

Hausmann sees the special-education schools as "a fourth leg" of the system. There are 10 different varieties of special school, including those for the hearing impaired, speech impaired, visually impaired, physically handicapped, learning disabled, emotionally troubled, and chronically ill, to name few.

These schools now house some 20 percent of German students overall, according to the German weekly Die Zeit.

Germany's segregated schools are not only under fire from a small group of disability-rights activists. In 2006, the system was singled out in a scathing report on human rights breaches by Vernor Munoz, the UN's Special Rapporteur on the right to education.

Munoz criticized the system, saying in particular that it posed a particular danger to disabled children -- as well as those from low income backgrounds and children of immigrants -- by separating them from the rest of society.

Herbert Hüppe, commissioner for disability in the Christian Democrat Union parliamentary faction of the Bundestag, agreed.

"Our current system is definitely a type of apartheid," he said

History of good will

Along with being a parliamentarian, Hüppe is also father of a son with spina bifida. He was able to get his son placed in a normal school in his region of Unna, in North-Rhine Westphalia. But it was a difficult fight, even for a parliamentarian. 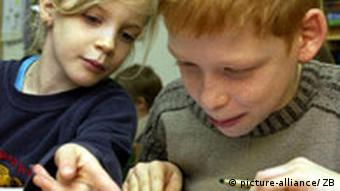 Hüppe said the German special-needs schools were born of a good impulse, long ago -- at a time when there was no compulsory education for the mentally handicapped at all.

"We thought we were really advanced by creating these schools. Other countries didn't have them," he said. "Now most other countries have inclusive classes and we are the ones who are behind the times."

His "ideal vision" for German schools is to wipe out the concept of the special school altogether.

"People think this is utopic or unrealistic, but I don't think we can get around it," he said.

Many people continue to argue that the special schools are where handicapped students can best get their needs met.

"But all the scientific studies show it is best for both the handicapped and non-handicapped students to attend integrated classes. Everyone benefits," Hüppe said.

He named Austria, Luxemburg and Canada as examples of countries that have successfully adapted their school systems to include disabled children in integrated classrooms.

"We have fewer and fewer students. We can't afford to keep sticking them in special schools," he added. 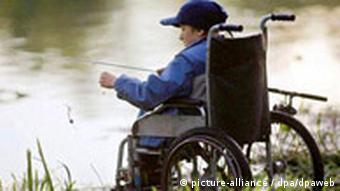 Handicapped kids are often kept out of sight

Yet contrary to this sentiment, special-needs schools in Germany are fuller than ever. From 1995 to 2002, the number of special needs students in Germany increased 10 percent.

"They are just too quick to send children to a special school these days," said Joel's mother Elke Krämer.

"I'm not talking about kids who need diaper changes or whatnot. These days if a child can't hop on one foot, they send him to a special school."

Yet with little political pressure behind it, a complete overhaul of Germany's divided school system appears unlikely to occur any time soon, said Eva Maria Thoms, one of the organizers of the Eine Schule für Alle conference in Cologne.

One of the biggest barriers to change is the fact that German education policy is entirely in the hands of each state, Thoms said. The federal government habitually shrugs its shoulders when faced with demands on education policy.

Still, for Thoms, politics is the only answer.

"Integration is a human right," Thoms said. The UN Convention on Rights of Persons with Disabilities, including Article 24 on inclusive education, was recognized by Germany in March, but the Bundestag has yet to ratify it.

"They should kindly get around to doing that as soon as possible," Thoms said tartly. When that happens, the German government would require the individual states to meet the requirements of the UN convention.

"That will be another fight," she said. "But it's the only way. And the parents have to apply pressure from below."

UN officials said they hope a new treaty will improve living and working conditions for the world's 650 million disabled, while politicians in Berlin want to integrate more physically disabled into mainstream schools. (30.03.2007)

A hearing impairment is no visible handicap, yet many hearing-impaired students in Germany are hesitant to talk about it. For some, the university is actually the first opportunity to meet other people with disabilities. (10.12.2006)

Should Germany dismantle its system of special-needs schools? Please send your name and country with your reply.