Living With Germany′s Biggest Pharmaceutical Disaster | Germany | News and in-depth reporting from Berlin and beyond | DW | 12.11.2007

Millions watched a controversial German TV film based on the thalidomide legacy last week. On Friday, Nov. 9, "Side Effects" was also released in English. DW-WORLD.DE spoke to a thalidomide survivor and his mother. 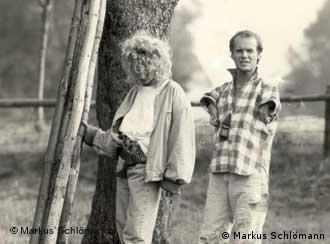 Markus with his sister: "This is my body and I have to live with its limitations"

In the autumn of 1960, Margret Schlömann, now 75, had trouble sleeping during her pregnancy and had taken an over-the-counter sedative called Contergan, which was produced by the privately owned German drug maker Grünenthal.

What Schlömann and thousands of other pregnant women did not know was that Contergan's active ingredient was thalidomide, a toxic substance that severely stunts the growth of a developing embryo's limbs. In June 1961, her son Markus was born without arms and thumbs and fingers that jutted out from each shoulder.

Today Markus Schlömann, 46, is one of around 2,800 thalidomide survivors living in Germany. Born in Bonn, he works for a bank, is an avid world traveler and has a seven-year-old daughter, Lena.

His mother also lives in Bonn and helps look after Lena.

DW-WORLD.DE: Frau Schlömann, what was it like for you after giving birth to Markus?

Margret Schlömann: Markus was my first child, so I didn't know what to expect. He also came six weeks early. Pre-maturity was common for thalidomide babies. After a normal hospital delivery, he was whisked away and put in an incubator. I didn't get to see my son. Nobody congratulated me. No one spoke to me. 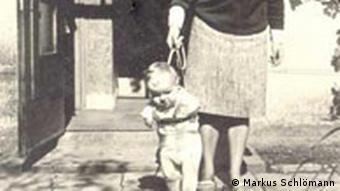 Without arms, Markus needed the help of a harness to balance

My husband Herbert had arrived, bringing flowers, but he was intercepted by the doctor before seeing me. I knew something was wrong. "Is the baby dead?" I asked Herbert. He broke the news to me. I was in shock, physically exhausted from the birth, and suddenly overwhelmed with grief.

I saw Markus four days later. My maternal instincts took over, and I held him close. There was another mother in the ward with her perfectly normal baby. She saw Markus there without any arms, and shrieked "What is that thing?"

You must have wondered what caused your child to be born without arms.

Margret Schlömann: A tiny percentage of babies have always been born with birth defects, and I thought that Mother Nature singled Markus out to be that one random statistic.

What I didn't know at the time was that clinics all over West Germany were seeing a sudden, drastic boom in the number of babies born without arms or legs or any limbs at all.

I joined a thalidomide support group for parents. It became clear that some outside factor must have been responsible for the limb deformities, but what? Was it radioactivity from nuclear testing? The shampoo I was using?

Then in November 1961, it came out in the newspapers. It was Contergan. I was hysterical. My doctor had urged me to take Contergan. In those days, you simply didn't challenge doctors or authority figures.

I took maybe two tablets throughout the pregnancy, but I was too busy to dwell on my feelings of guilt, which surfaced in later years. After Markus, the twins [who were healthy] came 18 months later, and restored a sense of normality in our lives.

How did people react to Markus?

Margret Schlömann: Some were voyeurs -- they were either fascinated or repulsed by his armless torso. One old woman made such a nasty remark, "How could you bring such a freak into this world," she hollered. Others pitied him. His appearance obviously made people feel squeamish or uncomfortable.

When he was a small child, the neighborhood kids taunted him, but the worst insults were directed at another thalidomide boy, who had no limbs, only extremities. The kids flapped their arms and chanted, "Penguin, penguin, see that penguin, ha, ha." 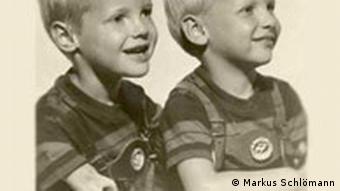 Markus' brother (right) is 18 months younger. By 1963, thalidomide was off the market

Markus, have attitudes toward the disabled changed in Germany?

Markus Schlömann: Yes, definitely. In the past, families felt ashamed of their disabled relatives and hid them from view, so handicapped people were far more isolated in the 60s than they are today.

Germans have become much more open talking about disability now. This is in part due to the AIDS/HIV revolution and greater awareness of the so-called diseases of civilization in the last decades, when those afflicted came out of the closet.

A lot of people don't even notice my handicap anymore. One colleague said, "Can you get that folder on the top shelf?" Then they realize I don't have the arms to reach for it.

It's only when Lena was born and started going to school that my disability became an issue again. Lena's schoolmates are not cruel and insensitive as kids in the 60s were, but they get on my nerves. "Why are your arms so short?" they keep asking over and over, even when they know the answer.

Markus Schlömann: Yes, but they can ask me other questions. I don't want to be defined by my disability.

Mostly adults, on the other hand, try to be helpful towards me. One guy offered to bag my groceries even though I am perfectly capable of doing it myself. I tried to be gracious about it, although I have some thalidomide friends who feel offended, even hostile towards such well-meaning gestures. 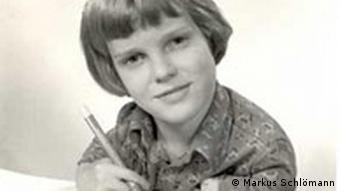 You've also traveled quite a bit. You've taken a Greyhound bus across America, you've been to India seven times, and taken trips to Latin America, Vietnam, Thailand, Indonesia, Fiji, Australia. How do reactions toward your disability differ in those places in comparison to Germany?

Markus Schlömann: I have never had a negative experience. I've always been a communicative person, and people respond in kind. Someone might be impressed by the way I can lift a coffee cup, but I don't know how to do it any other way.

In Thailand, where extended family structures are part of the culture, people are astounded that I have a regular banking job. They ask me, "Why doesn't your family take care of you?"

In some countries though, the infrastructure for handicapped people is not great. Germany is much further along in that respect. The increasing acceptance of disabled people here is reflected in how our special needs are addressed. Public buildings are equipped with wheelchair ramps and cars are specially designed for people like me to drive.

But in German schools, the physically handicapped are not exactly mainstreamed into the system. There's the so-called special needs school, which you attended.

Markus Schlömann: There was no alternative when I went to school in the 60s and 70s. The advantage of a special school is that the entire curriculum is geared towards your needs. In the afternoons we had gymnastic training to strengthen our back muscles for example.

We were all physically handicapped in some way and had great fun together, but by the time I graduated, I wanted to move out into the wider world. 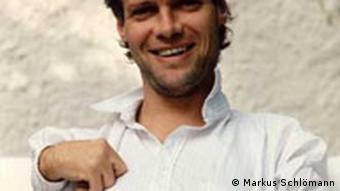 "A lot of people don't even notice my handicap anymore"

Do you get frustrated about your physical limitations when you see others performing simple tasks that you struggle with?

There are so many thalidomide adults who are much worse off than me. I have a good, well-paying job. I can walk, ride a bike and play soccer.

Some of my friends have physical limitations that make them unemployable. Many people I have known have died from their severe disabilities, others committed suicide. I think I've come to terms with my life.

After a protracted legal battle, producers of a drama about Germany's thalidomide disaster from 1958-1962 won the right to air their two-part film on prime time television. (12.11.2007)

A German film about the drug thalidomide, first issued 50 years ago, will be aired despite opposition by the firm that invented the medication. The drug caused thousands of children to be born with severe disabilities. (18.05.2007)

New EU rules require Europe-based pharmaceutical companies to show that the drugs they bring to market are suitable for kids. Experts say it's a huge step forward for children's health. (05.01.2007)