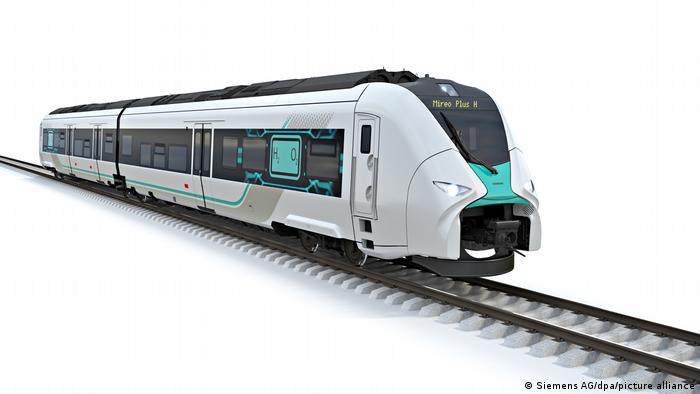 Developed in partnership with Siemens, instead of burning conventional diesel fuel, the unit is powered from a reaction of hydrogen and oxygen to create electricity. Water is the only byproduct.

With a range of 600 kilometers (around 400 miles) and top speed of 160 kilometers an hour, Deutsche Bahn believes the new train unit could prevent around 330 tons of carbon dioxide pollution a year.

Ahead of trial operations in the southwestern state of Baden-Württemberg, over a three year period, DB will begin converting one of their maintenance shops into a new hydrogen "gas station," according to the company.

"The fact that we will produce hydrogen on-site from green electricity and will refuel the train as quickly as a diesel train shows that the climate friendly transport turnaround is possible," says Professor Sabine Jeschke, DB board member for digitalization and technology.

Siemens' hydrogen fuel cell-powered prototype will be also be supplemented by an onboard battery. The design allows for a modular system, meaning it could also be powered by existing overhead lines as well, depending on where it runs.

Thousands of kilometers to go

Though the majority of Germany's rail network is electrified, some 13,000 kilometers of track, almost 40% of the system, still remains diesel powered. Since the rail company is obliged to end carbon emissions by 2050 or sooner, "We have to bring fossil fuel consumption to zero. Then we will not run a single vehicle with conventional diesel," said Jeschke.

Deutsche Bahn is aiming to increase the proportion of green energy used in its network from a current 60% share to 100% by 2038, when the nation's last coal-fired power plants are set to close.

Though most hydrogen used today is derived from fossil gas and coal, over the next decade, green hydrogen is expected to become cost competitive with fossil fuels and play a key role in decarbonizing industry, heating, and transport.