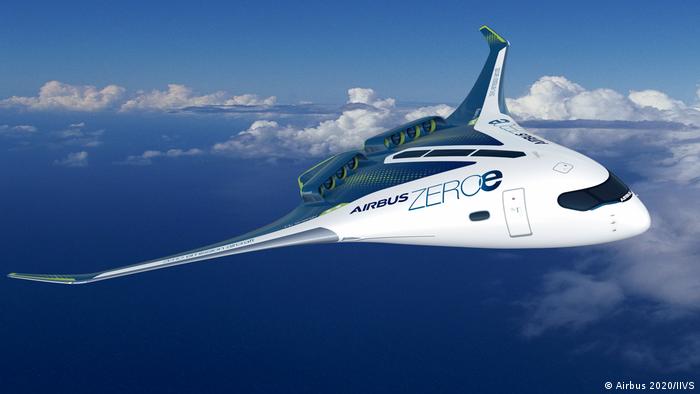 It doesn't exactly look like an aviation revolution. Airbus's newest aircraft design study glides through cloudless skies accompanied by celestial music — in an animated video. On a closer look it becomes evident though that the back of the fuselage doesn't have any windows at all (see photo below). On top of the vertical stabilizer there is something sticking out that looks a bit like an antenna.

These characteristics show that this indeed might be a breakthrough. "In the aft part of the aircraft, behind the pressure bulkhead of the cabin, the hydrogen tank is located, and the nozzle on top of the stabilizer serves to let off gas in the case of a leak," explained Airbus Chief Technology Officer Grazia Vittadini at a recent presentation of the company's first studies on hydrogen-powered airliners.

The aim is ambitious: By 2035 Airbus wants to bring the world's first emission-free passenger aircraft to market.

Moving away from fossil fuels

For this, the European manufacturer came up with three competing concepts, one of which shall become reality. Under strong pressure from politicians mostly in France and Germany, Airbus wants to be at the forefront of the transformation, accelerating aviation's move away from fossil fuels and fostering decarbonization. 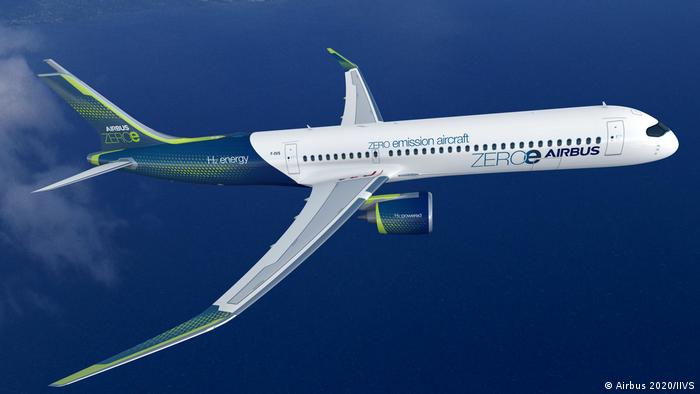 A computer animation of the turbofan concept aircraft. One of three Airbus designs

Germany has already developed its own hydrogen strategy. France pledged in early September to invest €7 billion ($8.1 billion) in hydrogen technology. So Airbus's venture comes at exactly the right time.

"This is an historic moment for the commercial aviation sector as a whole," said Airbus CEO Guillaume Faury about this "bold vision." Vittadini stressed "these exciting concepts are also intended to inspire future generations of engineers."

Hydrogen is difficult to handle

The idea to use hydrogen instead of kerosene as the energy source for aircraft engines isn't exactly new, but it is still challenging to turn into reality. That's why until today there is a lack of aircraft concepts that are up to harsh day-to-day use as well as economical operations.

Hydrogen is not easy to care for. Compared to kerosene, it has three times the energy density, which is a big advantage over batteries, and only weighs a third as much. But planes need up to four times the volume to keep them in the air. And space is notoriously scarce and thus precious on any aircraft.

On top of that — and this makes things very demanding — hydrogen is a so-called cryogenic fuel: A gas that only liquefies at minus 253 degrees Celsius (minus 423 degrees Fahrenheit). And even then, it can only be used for propulsion if compressed under high pressure. This necessitates a double-walled, cylindrical or spherical tank.

Back in 1988, engineers in what was then the Soviet Union modified a three-engine Tupolev Tu-154 airliner in a way that the right engine was powered by hydrogen. They called the test bed Tu-155.

Hydrogen can be used on aircraft in different ways: For direct combustion in modified gas turbines, converted to electrical energy via fuel cells or as synthetic kerosene, produced in combining it with CO2.

"We have to redesign the aircraft around this concept," said Vittadini. In doing this Airbus proposes a trio of different concepts.

The first concept is the conventional looking turbofan design described at the beginning of this article. It is able to carry 120 to 200 passengers on routes of up to 3,700 kilometers (2,300 miles), meaning it is neither capable of doing long-haul flights nor transcontinental flights.

The concept aircraft is slightly smaller than the current base model A320neo, operated by Lufthansa among others, but achieves the same speed of over 800 kilometers per hour also operating on hydrogen. 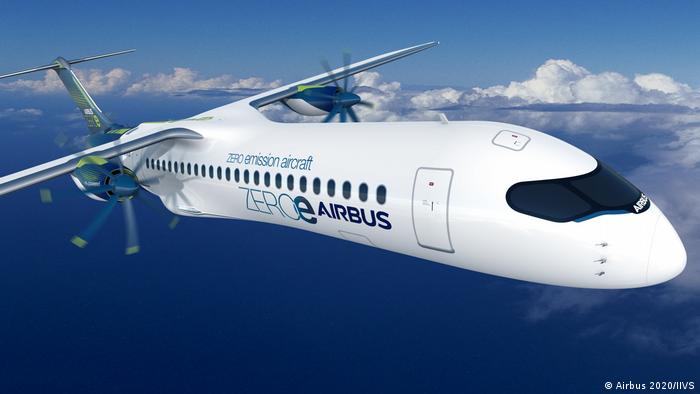 The second concept is a turboprop aircraft with propellers, taking up to a hundred passengers on short-haul routes and achieving 600 kilometers per hour, making it about a hundred kilometers per hour faster than current turboprops. Both designs feature modified gas turbines for propulsion, complemented by a hybrid electrical motor run by fuel cells.

It is all kept fairly conventional on purpose, "so we don't have to invest in completely new technologies," explained Airbus CEO Guillaume Faury.

Going for the Flying V

But there is also a third, disruptive concept: the hydrogen-powered Blended Wing Body design. Its wings and fuselage form one continuous aerodynamic body. This design is deemed the preferred one for future aircraft, such as the Flying V study recently unveiled in the Netherlands by airline KLM and the Delft University of Technology.

"The blended wing is aerodynamically the most advantageous model to integrate hydrogen tanks," Vittadini told DW. "But that doesn't mean that it is the ultimate solution for all other parameters." 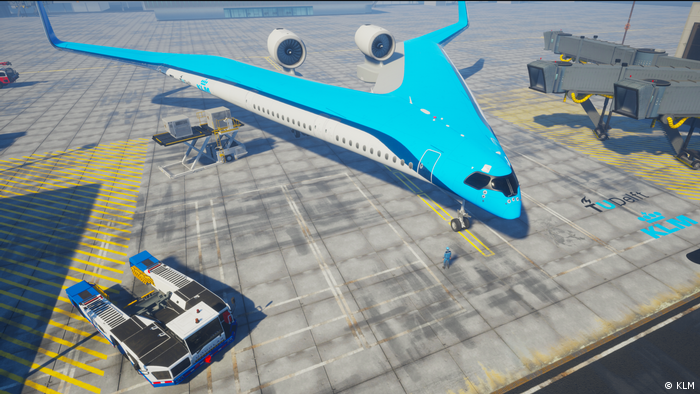 Airbus's initiative is also getting support from the science world. "The world is ready for it and Airbus has seized the opportunity," Dragan Kozulovic, professor for flight propulsion at the Hamburg University for Applied Sciences, told DW.

He finds it remarkable that the designs make do completely without using kerosene. He also thinks the planned entry into service by 2035 is realistic. Kozulovic sees the turboprop design as the most probable winning concept. But then, he stresses, it is crucial for its success that the necessary infrastructure for hydrogen operations on the ground is put into place, from production to storage and tanking. "That is a mammoth task," he said.

Hydrogen is only sustainable if produced from "green" energy, for example solar or wind power. Still Kozulovic objects to Airbus billing its concepts, called ZEROe, as being entirely "emission free."

Even if no CO2 is emitted, combusting hydrogen still produces water vapor, causing contrails in the skies that have a climate impact, as well as nitric oxide. "These aircraft will be significantly better, but not emission free," he explained.

Airbus to cut 15,000 jobs due to coronavirus setback

The aerospace giant is facing "the gravest crisis this industry has ever experienced," said Airbus' chief executive. The French government criticized the announcement, saying the figure was "excessive."

The airline Virgin Atlantic asked its staff to take eight weeks off without pay in the next three months, but is demanding a €8.5 billion bailout for its industry. Billionaire boss Richard Branson is now taking the heat.

Made in Germany - Covid-19's Impact on the aviation industry