The airline Virgin Atlantic asked its staff to take eight weeks off without pay in the next three months, but is demanding a €8.5 billion bailout for its industry. Billionaire boss Richard Branson is now taking the heat. 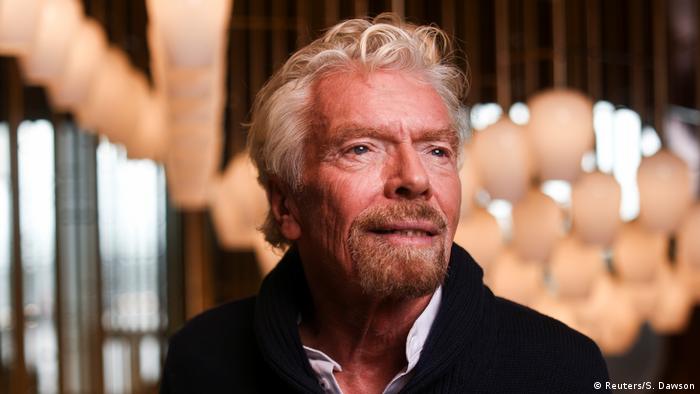 When Virgin Records signed The Sex Pistols in 1976, the band's Machiavellian manager Malcolm McLaren reportedly took the label's owner Richard Branson for a "naive hippy." But the Brit was soon taken aback at how ruthless and canny he was, according to Spiked magazine. This may not be the worst caricature of the grinning 70-year-old wunderkind of British business.

The billionaire has come under heavy criticism recently after his airline, Virgin Atlantic, requested its staff take eight weeks unpaid leave during the coronavirus pandemic. At the same time, Virgin Atlantic, in which Branson owns a majority stake, also called for a 7.5-billion-pound (€8.6-billion, $9.4-billion) bailout for the airline industry as a whole. UK-based Virgin plans to ground up to 85% of its fleet at points in April.

Airlines, retail and the hospitality are among the worst hit sectors as the global economy stops. Stelios Haji-Ioannou's Easyjet also demanded staff take unpaid leave and asked for huge state aid to help avoid making hundreds of people redundant. The firm also simultaneously confirmed plans for a 174-million-pound dividend payout to shareholders, including 60 million pounds for Haji-Ioannou himself, The Times reported.

Branson has the backing of Airbus, which makes Virgin's planes, and Rolls-Royce, which makes its jet engines, who have warned that if the airline collapsed it could drag them down too. Manchester Airports Group chief Charlie Cornish added his name to the list of travel industry bosses that want Virgin to survive. 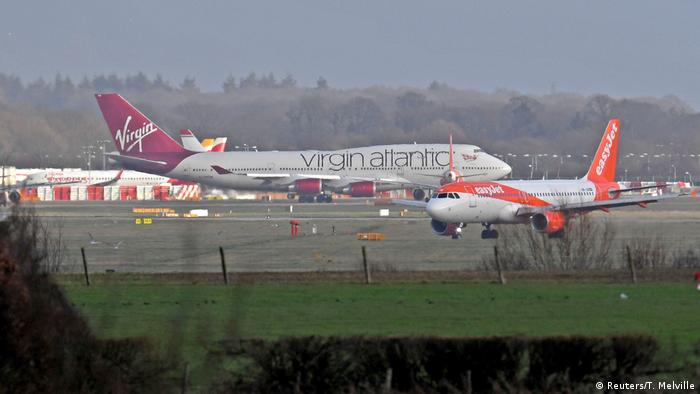 But many point out that Branson has not paid personal income tax since moving to the tax-free British Virgin Islands 14 years ago. Meanwhile, dividends sent to Branson on Necker Island, where he lives, are not subject to any taxes.

Opposition Labour Party lawmaker Kate Osborne, the second British politician diagnosed with the coronavirus, said Virgin Atlantic's decision was "an absolute disgrace" and a Conservative MP set out how easy it would be for Branson to pay his staff. Richard Fuller told the Commons that eight weeks at the 94 pounds statutory sick pay would cost 754 pounds per employee.

A Virgin Group spokesperson rejected the criricism voiced, telling DW that "Richard and the Virgin Group have invested hundreds of millions in businesses in the UK, created thousands of jobs and generated significant tax and other revenues to the government for the benefit of the UK economy. Richard now spends most of his time starting not-for-profit ventures and raising millions for charity.”

Branson offered to put $250 million of his own cash into the Virgin group to show the government his good will, though it isn't clear how much of that would be for the airline as Virgin as a group is not doing so great, including its hotels and health clubs.

Branson's business empire has been hit hard by the coronavirus pandemic. On March 14 the Virgin Voyages cruise ship operation postponed the launch of its Scarlet Lady cruise line and on March 5 British airline Flybe collapsed due to weakened demand because of the COVID-19 outbreak.

British Finance Minister Rishi Sunak told airlines in March that the government would give them no special support. He said airline companies should raise money from shareholders and "exhaust other options" before asking for state help, which would only be there as "a last resort."

Branson founded Virgin Atlantic in 1984 and has a 51% stake alongside US airline Delta with 49%. Virgin Atlantic lost over $100 million in 2017 and 2018, the two most recent years for which its accounts are available. Its net debt was five times higher than a comparable measure of earnings, according to the latest group accounts. Delta is also in trouble, losing an estimated $50 million a day. Standard & Poor's has downgraded its debt to junk.

Branson launched an array of high-profile businesses — from Virgin Atlantic and his space tourism venture, Virgin Galactic, by way of Virgin Money, Virgin Radio, Virgin Trains, Virgin Cola and Virgin Cosmetic. By 2014, the group had interests in 200 companies across 30 countries. The secret to his expansion lay in licensing the highly regarded Virgin name, a strategy he calls "branded venture capital."

Virgin Care had been awarded 2 billion pounds worth of NHS and local authority health care deals, but paid no corporate tax in the UK as it operated at a loss. The company is controlled by Virgin Group Holdings in the British Virgin Islands.

A spokesperson for the Virgin Group said John Lister's accusations were unfounded. "The Virgin Group has invested more than 75 million pounds into Virgin Care and neither Richard, nor the Virgin Group have ever taken a penny out of the NHS, nor do they intend to do so. All monies received have been reinvested back into paying for delivering services as well as being invested in transformation projects to improve the NHS. Richard and everyone at the Virgin Group are immensely proud of the Virgin Care team who have, like everyone else in the NHS, been going above and beyond in this time of crisis.”

At the low point of the stock market rout in March, the billionaire reportedly shifted his $1.1 billion stake in Virgin Galactic Holdings from the US state of Delaware to the British Virgin Islands. US regulatory filings show the transfer was made on March 16, that day the Dow Jones Industrial Average saw its worst one-day drop in history.

"The 2008-09 financial crisis should have taught us that lavishing public money on big businesses without any conditions attached would be a big mistake," Luke Hildyard from the High Pay Centre told The Guardian newspaper.

The article was updated on April 22, 2020, now including comments by a spokesperson of the Virgin Group on Richard Branson's activities and the criticism levied against him.

Germany's coronavirus travel restrictions: What you need to know

Germany has imposed border controls to curb the spread of the novel coronavirus. But how do the restrictions affect travelers en route to Germany? DW explains who is allowed to enter the country — and who isn't. (06.04.2020)