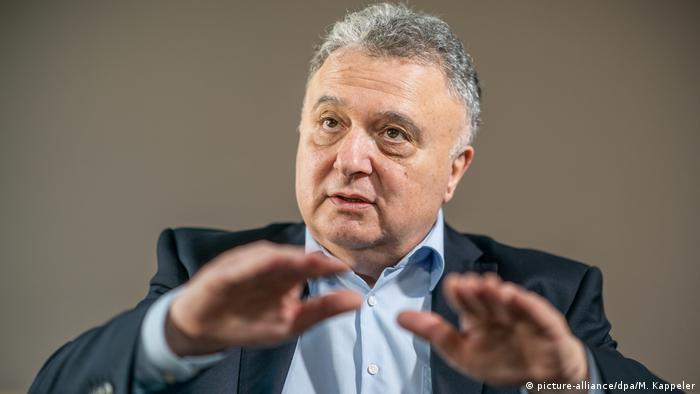 Following anti-Semitic and anti-Muslim attacks in Halle and Hanau, Israeli ambassador to Germany Jeremy Issacharoff warned Thursday that: "No democratic society can survive if minorities are constantly threatened or harmed."

"The Holocaust has shown us all where such hatred leads," he told the German regional newspaper Neue Osnabrücker Zeitung. "An open society can tolerate many things, but never violence. People are starting to act violently against minorities, against Jews and Muslims again."

The ambassador also appealed to Jews and Muslims not to hide their religious affiliation.

"More security for every kind of community in Germany cannot be achieved by people hiding their identity, their religion," said the Israeli ambassador, who has been living in Germany for two and a half years.

"Not wearing a kippa or Muslim headgear would also mean hiding the problem. We have to protect everyone, stem terrorism and hatred, and maintain an open society where we can celebrate our diversity."

'Europe the cradle of Antisemitism'

The Israeli diplomat also criticized recent carnivals in Spain and Belgium, where anti-Semitic floats were on full display, triggering outrage across Europe.

Issacharoff wrote on Twitter: "This is contemptible and scandalous to relate to the Holocaust in this way particularly in Spain that instigated the Inquisition against Spanish Jews over 500 years ago. This and the recent event in Belgium reinforce the image of Europe as the cradle of Antisemitism."

The Belgian carnival in Aalst is known for mocking public figures, but recently came under fire for promoting insulting and derogatory depictions of Jews.

The Carnival troupe in Spain, meanwhile, has apologized to the Jewish community over a parade in the small town of Campo de Criptana, about 110 kilometers (68 miles) southeast of Madrid. Spain's foreign minister decried the procession. It has since canceled its remaining shows.

Eds: This is a modified version of a previous article.

A weakened center-left SPD will maintain its leadership in the city-state, according to initial exit polls. Support for the far-right AfD dropped, briefly jeopardizing its seats in Hamburg's state parliament. (23.02.2020)