The Belgian city of Aalst went ahead with its traditional Carnival parade on Sunday, despite calls from Israel to ban the event over its anti-Semitic floats and costumes.

Lawmakers in the European Parliament had urged officials in Aalst to make sure this year's parade was free from "manifestations of hatred."

The city's Carnival parade lost its UNESCO cultural heritage status last year over the "recurrence of racist and anti-Semitic representation." Revelers then dressed in Nazi costumes, making fun of the move.

The city's mayor dismissed criticism and calls for a ban on the festivities, saying "let Aalst be Aalst."

D'Haese, of the right-wing nationalist New Flemish Alliance party, added that the goal of the parade is "not to hurt anyone."

City authorities have repeatedly defended the parade as an expression of free speech and saying the costumes and floats are intended to be "satirical."

The US Holocaust Museum tweeted "24,000 Jews living in Belgium were murdered in the Holocaust. Today, deadly anti-Semitism is on the rise again throughout Europe. Events like the Aalst Carnaval parade that promote anti-Semitism and stoke hatred and potentially violence must be denounced by all segments of society." 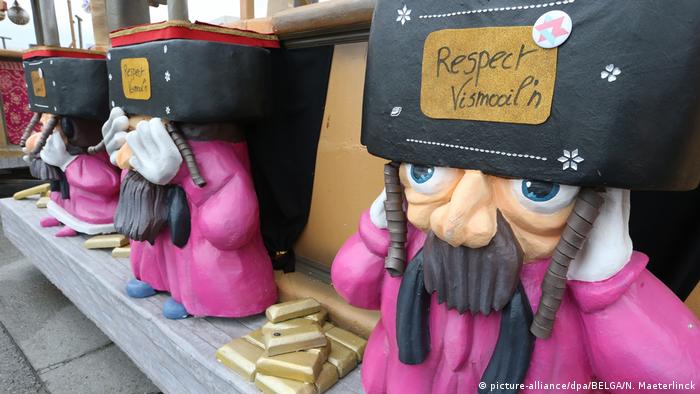 Sunday's parade in Aalst also took place despite the threat of strong winds gusting up to 100 kilometers per hour (62 mph). Several other Belgian cities postponed or canceled their parades due to the severe weather.

The Aalst Carnival celebrations, which are more than 600 years old, were given UNESCO cultural heritage status in 2010. Last year's parade prompted a wave of criticism from the EU and from Jewish groups after a float included Jewish caricatures with bags of money that were surrounded by rats.

According to the World Jewish Congress, Belgium is home to a small Jewish community of around 30,000 people out of the country's total population of 11 million.