The town of Aalst was slammed after its famous carnival celebrations featured caricature Jews sitting atop piles of money. City officials say they are sick of the backlash and no longer want to be on the UN list. 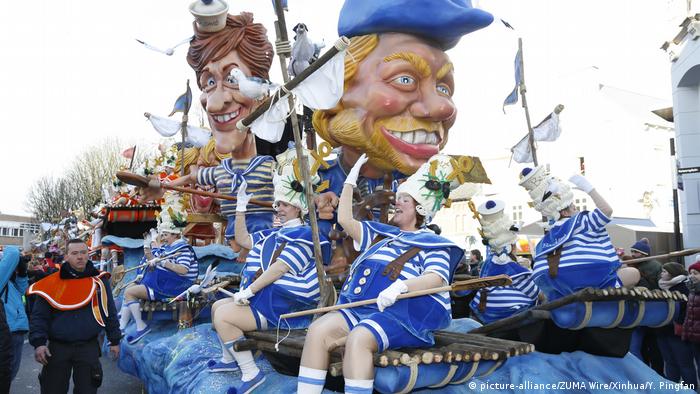 The northern Belgian town of Aalst has decided to withdraw its annual carnival from the UN cultural heritage list, saying it is fed up with allegations of anti-Semitism.

The town was widely condemned after one of the floats at its carnival parade in March featured offensive caricature depictions of Orthodox Jews with hooked-noses and sitting atop bags of money. UNESCO, the European Union and Jewish groups called the float anti-Semitic, with the EU saying it was reminiscent of the kind of caricatures disseminated in Nazi Germany during the 1930s.

Aalst mayor Christoph D'Haese said Sunday that city officials "have had it a bit with the grotesque complaints" and no longer want the UNESCO designation.

"We are neither anti-Semitic nor racist. All those who support this are acting in bad faith. Aalst will always remain the capital of mockery and satire," he said in a statement quoted by Belga news agency.

Aalst's carnival is a 600-year-old tradition that attracts tens of thousands of people each year. The celebration is famous for its provocative and satirical parade floats, which often poke fun at celebrities, as well as religious and political leaders.

D'Haese said it was not up to him to police humor, adding that it was "unavoidable'' that there would be more Jewish ridicule at next year's carnival.

"We are on a very dangerous slippery slope when people will be able to decide what can be laughed at," he said.

'We will keep a close eye on Aalst'

Hans Knoop of the Belgian Forum of Jewish Organizations told The Associated Press that renouncing the UNESCO cultural heritage tag shouldn't clear the way for similar displays of anti-Semitism in the future.

"They are not at liberty to spew any more anti-Semitic dirt,'' he said. "We will keep a close eye on Aalst."

It's not the first time the town's carnival has drawn controversy. In 2013, revelers dressed as Nazi SS officers marched in the parade alongside a float that resembled a Nazi railway wagon used to transport Jews to death camps.

The three-day festival, which takes place ahead of Roman Catholic Lent, was given heritage status by UNESCO in 2010.

The UN body was expected to decide at a December 12 meeting in Bogota, Colombia, whether to strip Aalst of its Intangible Cultural Heritage designation.

The Historical Roots of Carnival in Germany

People in Germany have been celebrating Carnival since the Middle Ages. Today, few people are aware of the historical roots of the tradition. (15.01.2002)

A court in Belgium has sentenced French comedian Dieudonne to two months in prison for making anti-Semitic jokes during a show. The controversial humorist has repeatedly been convicted of racism in France. (25.11.2015)