The over 90-year-old female turtle died a day after an aborted attempt at artificial insemination. The Suzhou city government said experts have collected the turtle's ovarian tissue for future research. 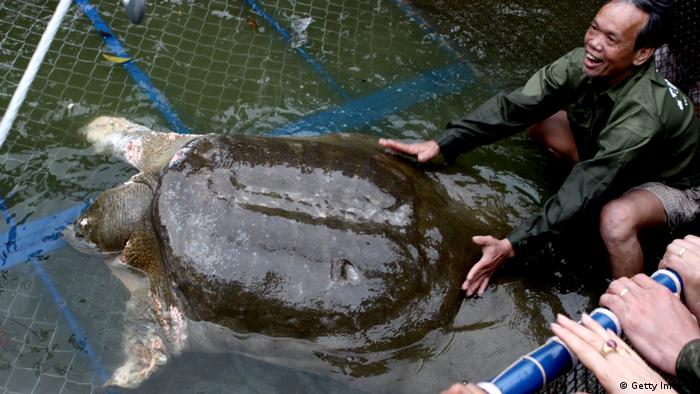 The only known female member of one of the world's rarest and most endangered turtle species has died in a Chinese zoo, authorities at the zoo in the East Chinese city of Suzhou confirmed on Sunday.

The Suzhou zoo also houses a male Yangtze giant softshell turtle. The other two live in Vietnam, but their genders are unknown.

China's state-run People's Daily newspaper said the deceased turtle was over 90 years old. She had been inseminated five times since 2008, with the last operation taking place shortly before her death.

Although the last insemination went smoothly and the turtle appeared to be in fine health after the procedure, her condition deteriorated the following day.

Efforts to protect the species

Media reports say that the turtle's death means that the city authorities' 13-year plan to artificially breed and save Yangtze turtles has failed.

Suzhou authorities say vets at the zoo are investigating the cause of the turtle's death.

The female Yangtze turtle was moved to Suzhou from the Changsha Ecological Zoo in 2008, to be paired with the male turtle there, which is now over 100 years old.

Yangtze giant softshell turtles, which originated in China, are believed to be the most endangered turtle species in the world. They weigh an average 115 kilograms (253 pounds).

Experts say that overfishing, habitat loss and other human activities are to blame for the decline in their population over the decades.