As the US accuses China of being a currency manipulator, Beijing calls such labeling unfair and "wayward unilateralism." With more escalation in the US-China trade spat expected, is a currency war unavoidable? 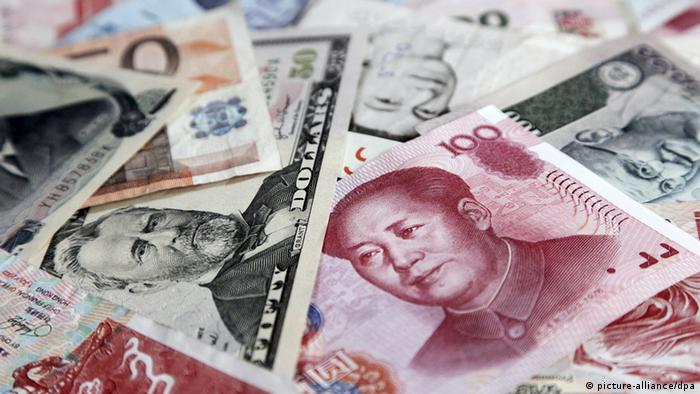 In yet another escalation in the US-China trade dispute, the US Treasury Department has determined that "China is a currency manipulator."

So, who's right and who's wrong?

Analysts are still debating China's move on Monday to let the nation's national currency crash through the key 7-yuan-per-dollar level form the first time in over a decade. To many, it is a clear signal that Beijing might be willing to loosen its reluctance to accept an even weaker yuan against the backdrop of an escalating trade spat with the US.

After all, the sharp drop in the Chinese currency came on the back of remarks by US President Donald trump that he would slap 10% tariffs on the remaining $300 billion (€268 billion) of Chinese imports from September 1, thus abruptly scrapping a truce in a trade conflict that has already taken its toll on supply chains and led to slower growth.

There had previously been justified hope that China's central bank would not accept a weaker currency so as not to endanger yet another round of trade negotiations with the US.

"The fact that [China] has now stopped defending 7.00 against the dollar suggests that it has abandoned hopes for a trade deal with the United States," Capital Economics analyst Julian Evans-Pritchard said.

"The People's Bank of China has fully given the green light to yuan depreciation," Mizuho Bank strategist Ken Cheung told Reuters. For ING economist Rob Carnell "it appears the Chinese authorities no longer see the need to limit the tools at their disposal and that the currency is now also considered part of the arsenal to be drawn upon."

But whether Beijing will really continue down that road is yet to be seen. While the world's second-biggest economy has experienced slowing economic growth amid a tougher trade dispute, the Asian giant has not suffered a large-scale capital flight. Authorities may be concerned that huge capital outflows might be the long-term result of an unfettered currency war. They may well be interested in eventually stabilizing the yuan around the 7.2 or 7.3 level as analysts suggested.

On the other hand, the prospect of short-term gains in the form of cheaper exports as a tool to offset higher US tariffs may prove too promising to ignore. Everyone can make an educated guess whether or not China will really kick off a full-blown currency war, but given the nation's command economy, predictions are hard to make, the director of the German Economic Institute, Michael Hüther, told DW.

"China is really a difficult story," Hüther said. "It's not really a market economy, and [the government] surely has its own economic, political and military agenda."

At the  least, Monday's yuan depreciation was by no means the first of its kind in recent history. The currency has crashed through other psychologically important barriers before.

The Chinese central bank had long loosely pegged the currency to the dollar or rather a basket of currencies dominated by the greenback. For a long time before the fall of 2015, the lender had kept the yuan within a trading range of approximately 6.25 per dollar, meaning $1 would buy roughly 6.25 yuan. 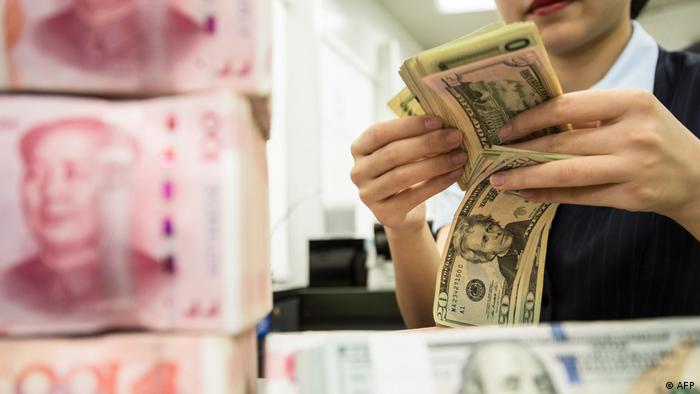 Movements in exchange rates are carefully watched by exporters. They can make their shipments abroad cheaper or more expensive

In August 2015, the central bank shocked forex markets by allowing the yuan to fall to 6.38 to prepare yet another drop in January of the following year. In 2017, the Chinese currency was reported to have fallen to a nine-year low.

The government rejected all talk of a currency war, saying it only intended to compensate for the rising dollar making its exports more expensive. In point of fact, China's currency had gone up again by the end of that year following a significant drop in the value of the greenback.

Nonetheless, Trump has frequently criticized China — plus Japan and the eurozone for that matter — for using currency manipulation at home to gain an economic advantage over trade partners like the US. Continued yuan weakness would be almost certain to reignite Trump's ire.

In fairness, being a market economy, the US cannot really force its currency to devalue so as to boost domestic exporters by making their goods cheaper abroad. But the implementation of a wide range of fiscal and monetary policy instruments by the Federal Reserve has pretty much the same effect.

When did it all start?

History suggests that a policy of competitive devaluation usually only affords a short-term advantage over rivals. It's fair to say that systematic attempts at devaluation have been going on at least since World War I when countries walked out of a system in which paper money was tied to a nation's reserves of gold, called the Gold Standard. That paved the way for them to manipulate their currencies artificially.

Competitive devaluation is in fact a euphemism for a currency war, with the term being officially coined in September 2010 by former Brazilian Finance Minister Guido Mantega. He noted that "a currency war has broken out" in the wake of the global financial crisis.

He referred to the fact that since the peak of that crisis, over 20 central banks around the globe had reduced their benchmark interest rates and implemented additional monetary policy measures such as large-scale quantitative easing (QE).

Brazil had become an early victim of that phenomenon as capital seeking higher interest rates was channeled into emerging markets. This made the currency of Brazil and other emerging economies a lot stronger, harming them by making their commodity exports that much more expensive around the globe — exports they depended on a lot like oil, iron or copper.

Any long-term winners at all?

The example of Brazil goes to show there are casualties in every war, including a currency war. And it may well become a lose-lose situation for all involved. The logic of the game is that when somebody kicks off such a war, those targeted are likely to retaliate, eventually leading to what economists call "a race to the bottom" and a global recession.

And even in the first phase of such a war, the initiator, who can indeed make domestic exports more competitive for a given period by devaluing the national currency, has to put up with more expensive imports, thus lowering citizens' purchasing power and most likely increasing inflation. In the end, currency wars stand to put a damper on global trade, doing more harm than good.

Having said that, there's no guarantee that in times of increased trade tensions between the world's two biggest economies the most rational steps will be taken by those calling the shots.

G20 finance ministers have repeatedly said they would not resort to manipulating currencies for competitive purposes. And it's also true that most bigger nations let the market forces determine exchange rates. But some analysts believe that a few more explosions of trade spats down the road may see China, the US and others more willing to use their currencies as leverage, if other tools fail to yield the desired effect.